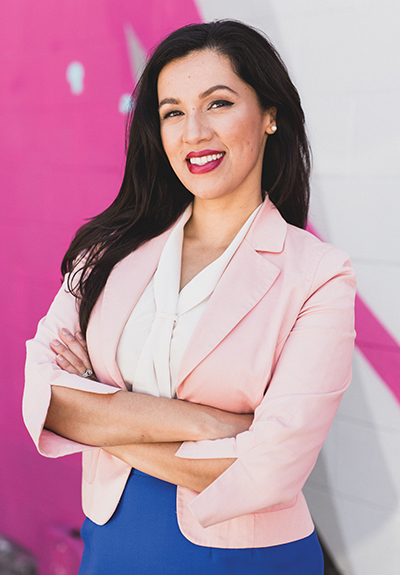 Students have a special place in the heart of Natalie Torres-Haddad—especially those in need. That’s why, in 2007, she founded LA’s Prom Closet, which provides free formal gowns to teenage girls in Southern California.

“At our very first event, we helped 45 girls, and every year it grew until we were helping more than 300 girls,” she says. “It was really rewarding to see them enjoy their prom night and not have to worry about any expenses.”

Countless other students have benefited from Torres-Haddad’s compassion and counsel. She is on a mission to help others through financial literacy and higher education. As a partner and contributor for Educated Latina, an online community for Latina women in pursuit of higher education, Torres-Haddad speaks at student conferences and gives presentations on financial literacy. She facilitates workshops for college students and nonprofit organizations several times a year and teaches business administration courses at the United Education Institute College in Huntington Park, California.

Toastmasters, she says, gives her the speaking skills and confidence to effectively share her message of empowerment.

Born in El Salvador, the 35-year-old has experienced firsthand the struggles of poverty and lack of educational opportunities. Her family escaped the dangers of El Salvador’s civil war, which lasted from 1980 to 1992, by immigrating to the United States when she was a baby. Though the family escaped a war, they experienced a different set of challenges in their new home.

“I grew up in Inglewood, California—in a very poor area—during the time right before the Los Angeles riots [in 1992],” she says. “We saw grocery stores and mom-and-pop restaurants nearby burned to the ground. People were just so frustrated. As a kid, I didn’t understand why, but it had a real impact on the way I grew up.”

Her parents stressed the value of education at a young age. Because their neighborhood was plagued by gang activity and poor schools, her father drove her and her younger brother to a private high school 45 minutes away. That school opened many doors for Torres-Haddad and gave her access to “guidance that a lot of public high schools weren’t providing—like how to apply for financial aid,” she says. And her parents considered college a must.

She went on to earn a bachelor’s degree in 2003 in finance and international business from California State University, Long Beach. She also earned a master’s in public administration from California State University, Northridge, in 2011. And while her fellow graduates were struggling with student loan payments and credit card debt, Torres-Haddad maintained a balanced budget that allowed her to pay off her student loans and purchase her first property by age 24. She was determined not only to earn financial freedom, but also to help others do the same.

“A lot of people are ­nervous about their ­accent, but the thing is, my accent makes me who I am.”

She heard about Toastmasters when working as a project manager for the South Bay Latino Chamber of Commerce in Hawthorne, California. “I was always the one representing our chamber at city council meetings and doing grand openings and events, so being able to present to a large group was something I wanted more experience and practice with,” she says.

So in 2005 Torres-Haddad joined the Xerox Xeroids Toastmasters in El Segundo, California. It helped her learn to embrace her Spanish accent when speaking in English. “A lot of people are nervous about their accent, but the thing is, my accent makes me who I am,” she says.

In 2016, she joined the Compton Elite Communicators, where she’s working on a whole new set of goals, one of which is to become an Accredited Speaker. “Natalie is an excellent storyteller and uses stories from her own life to drive home a point,” says the club’s vice president education, Margaret L. Mitchell, DTM. “She has a certain amount of warmth about her personality. She’s able to bring that into her speeches, so they’re inspirational.”

Torres-Haddad credits Toastmasters with helping her reach her personal goals and build her career. These achievements include earning a master’s degree, getting paid to speak in public and publishing a book, Financially Savvy in 20 Minutes. She’s also determined to visit 80 countries by the time she’s 80 years old (she’s been to 31 so far).

Following the success of LA’s Prom Closet, Torres-Haddad was in the spotlight, with news outlets including the Los Angeles Times, ABC News and Telemundo (a Spanish-language television channel) wanting to interview her about the organization. “I was never a shy person, but when it came to talking about my dreams, I got very nervous,” she says. “All the little things I learned through Toastmasters helped me be a lot more comfortable when speaking to the media.”

Her Toastmasters skills continue to help her, especially when she teaches classes and workshops. “One of the things I’ve learned is how to engage my audience—sometimes I’ll ask for a quick response, for students to raise their hands or to shout out the answer. People sometimes can get lost when they’re listening to someone speak. Their minds wander, and you have to bring them back to the topic.”

“All the little things I learned through Toastmasters helped me be a lot more comfortable when speaking to the media.”

“I’m not used to teachers being as committed to their students as she was,” says Alvarez, who also attended one of Torres-Haddad’s financial literacy workshops. “She made all of our goals seem more believable and achievable. I still go back to Natalie and ask for her advice any time I feel like I’m stuck in a place where I have to make choices about work. … I feel like she took me under her wing and guided me through life."

Sharing her own experiences, Torres-Haddad strives to inspire others, particularly students and fellow Latinos, to look for opportunities they can use to achieve their goals. She continues to focus on empowerment through financial literacy and higher education. As a financial literacy expert for LatinaVIDA, a nonprofit organization that hosts leadership programs for up-and-coming Latina executives, she has given presentations on how to manage money, prepare a budget and eliminate debt.

“She really cares about the community,” says Cecilia Mota, executive director of LatinaVIDA. “That’s what I really sense about her, that she loves what she does and that she cares about the betterment of her community.”

“I am a product of my community,” Torres-Haddad says, “and if I don’t give back to it, then I don’t expect someone else to have those same opportunities.”