From the Tech World to the Writers’ Circle 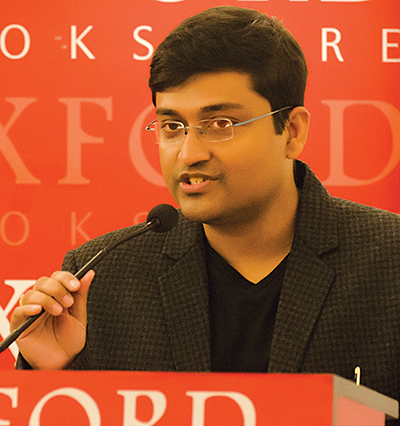 Ayan Pal speaks about Chronicles of Urban Nomads, one of the an­thol­ogies to which he contributed, at Oxford Bookstore in Kolkota, India.

The first time Ayan Pal, DTM, realized creative writing was more than just his hobby was while pursuing a bachelor’s degree in electronics and communication engineering from Dr. Ambedkar Institute of Technology in Karnataka, India. He had always enjoyed writing short stories and poems, but during a school break in 2002, he set a goal to become a published author. During his final year of engineering school, he started writing a novel but didn’t complete it. It wasn’t until he joined Toastmasters in 2010 that he once again was drawn to the world of storytelling. Three years later, after he became a Distinguished Toastmaster, he was determined to be published even though he had a full-time job at IBM in Kolkata. A year later, Pal’s writing was featured in an anthology of creative short stories. Since then he has contributed to eight additional anthologies and has published two novels to high acclaim in India. Pal, who is a member of his employer’s club, IBM Blue Voice Toastmasters, in Kolkata, talks about his creative journey below.


What are some highlights of your writing career?

In 2014, I was one of 21 winners in a nationwide short story contest organized by the self-publishing company Notion Press. More than 400,000 readers voted in the online contest and winning entries were published in the anthology 21 Tales to Tell. In 2015, I co-authored India’s first composite novel (a series of short stories that are all inter-related in a coherent whole), Crossed and Knotted, which made it to the Limca Book of Records, often regarded as India’s version of the Guinness Book of World Records. In 2016, I was one of the top five finalists in the creative writing and humor categories for the Orange Flower Awards, which recognize creativity in the digital landscape. The same year, I released my solo debut novel, Confessions on an Island, which is highly rated on both Amazon and Goodreads.com. It was also chosen as the best Indian book for 2016 by Prabhat Khabar, a Hindi language newspaper in India.

You accomplished your goal while working full time. How did you manage this?

I give a lot of credit to Toastmasters. Being part of an executive committee—sometimes while in multiple clubs—and playing different roles in meetings taught me how to multitask. In the process of becoming a Distinguished Toastmaster, I learned how to set and achieve goals and balance my time between work, family, Toastmasters and creative writing. Over time, I learned how to manage my growing list of responsibilities by focusing on one thing at a time. When I was in a meeting, I would turn off my phone and concentrate only on the meeting. Likewise, while writing or working, I wouldn’t give in to distractions.

To those who want to pursue their passions while working full time, I suggest setting aside time on a regular basis to focus solely on specific tasks, and to avoid distractions as much as possible during that time.

Toastmasters taught me innumerable things that have helped me personally as well as professionally. Having been a club officer over 30 times, and serving both as area and division governor, has helped me to establish myself as a thinker, influencer and motivator—even beyond Toastmasters. Regular participation in speech contests and mentoring others have helped me express myself in the best possible manner and communicate with maximum impact. Toastmasters also helped me with storytelling. In fact, my first published short story was based on my Project 4 speech from the Competent Communication manual.

What genres do you write in and what is your inspiration?

Having started with short stories, I’ve experimented with multiple genres, including contemporary, thriller, drama, fantasy, romance and magic realism. But a common theme that runs through all my stories is the transformation of complex characters facing big decisions. I want my readers to relate to my stories on some level and empathize with the characters. As far as inspiration is concerned, my late mother will always be at the top of the list, followed by talented storytellers including Agatha Christie, Arundhati Roy, Jhumpa Lahiri, J.K. Rowling, J.R.R. Tolkien, M. Night Shyamalan and Satyajit Ray, who inspired me with their passion, perseverance, hard work and determination.
Mariam Jehangir is the editorial assistant for Toastmaster magazine.