A Star is Born

A young woman with Down syndrome is a hit on TV show Born This Way.

Sitting on the couch of her family’s Southern California home, Rachel Osterbach talks enthusiastically about her life. She loves dancing. She loves musicals such as Mary Poppins. And last year she saw her first concert when her dad bought her tickets to see pop star Adam Lambert.

“He is my all-time favorite,” says Rachel, a member of a Toastmasters Gavel club.

There’s one bit of news she is particularly eager to share. “The big thing is that my show won an Emmy!” she says.

The 34-year-old is one of the stars of Born This Way, a television reality show that focuses on a group of young adults born with Down syndrome. Now in its third season, the popular show won the 2016 Emmy Award—the top prize in the U.S. TV industry—for “outstanding unstructured reality program.”

Born This Way represents a milestone for diversity on TV: It is hailed as the first time people with intellectual disabilities have been given a primary voice on a reality series. Airing on the A&E network, the show looks at the full lives of its seven cast members, highlighting their joys, struggles and relationships with family and friends. They talk about most of the same things all people do, such as love and work. Rachel, who works as a mailroom assistant at an insurance company, says the program shows that “anybody with Down syndrome can do anything.”

(For those who don’t have access to the A&E network on TV, episodes of the show can be viewed online.) 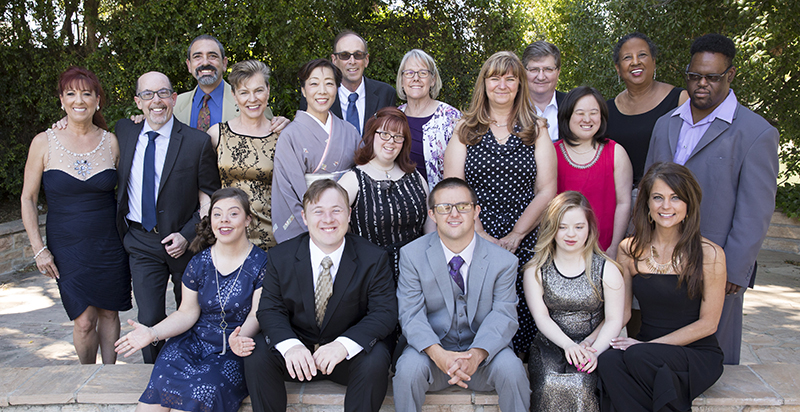 Rachel Osterbach stands in the middle of Born This Way cast members and their parents. Rachel’s parents, Gary and Laurie, are at the far left.

Rachel is enjoying the perks of celebrity. She travels to places like Orlando, Florida, to make public appearances for the show, signs autographs and gets to spruce up her wardrobe with new dresses. “My mom and I go shopping a lot.”

People sometimes approach her to tell her how much the series means to them. Just the other day, she says, two people recognized her while she was eating breakfast in a restaurant. “One of them started crying a little bit,” says Rachel. “She said I’m such an inspiration to people.”

Rachel is also a Global Messenger, one of a number of adults around the world who have participated in the Special Olympics—sports competitions for people with intellectual disabilities—and speak to the public about it. She belongs to a Toastmasters Gavel club specifically for Global Messengers in Southern California. (See page 26.) Rachel and her dad, Gary, share a special bond when it comes to Toastmasters. Not only does he attend the club meetings with her, but he belongs to a club himself—the Smedley Chapter One Club in Irvine, California.

Rachel says she was nervous when she first joined Toastmasters, but “I told myself if my dad can do it, I can do it.” Since then, she has given many speeches, including a few at the Smedley club.

They both talk about getting butterflies before giving speeches, the hard work it takes to improve and the benefits that come with practice. Gary recalls a recent speech that Rachel gave at a Special Olympics fundraising event in Fountain Valley, California. “Afterward, one of the people there came up to her and said, ‘I can tell you went to Toastmasters because you have gestures and vocal variety,’” Gary says. “So that was pretty cool.”

Toastmasters has also helped both of them with the TV series. Parents of cast members often appear in the show, discussing issues such as their adult children’s growing independence and the challenges that come with that. When he and his wife, Laurie, are interviewed on camera, says Gary, he draws heavily on his Table Topics skills.

Table Topics practice has also benefited Rachel, he adds, because she participates in panels and Q&A sessions in connection with the show. “She is much better now at not giving one-word answers and knowing that she needs to talk about things.”

Rachel was discovered for Born This Way through a local drama class that helps people with Down syndrome express themselves. She made a strong impression on the show’s producers.

“Beyond the fact that Rachel is just precious, loving and kind, we admired her honesty,” says Laura Korkoian, an executive producer of the series. “Rachel is strong and passionate and clearly in touch with her feelings.”

As Rachel puts it, “Everybody thinks I’m the mother in the show. I tell them what’s right and what’s wrong.”

You can see her caring nature in the exchanges between her and her dad. As the two sit next to each other on the couch, Gary talks about why he joined Toastmasters 13 years ago.

“I had a fear of public speaking, and typically my job required me to do public speaking. I used to agonize if I had to give a speech. I would lose sleep the night before and think of ways to get out of it.”

“You never told me you had a fear of public speaking,” says Rachel.

“I used to have that fear,” Gary says.

“Well, how come you didn’t tell me this?” replies Rachel. “I could have helped you with that.”

The fact that Gary’s struggles came before Rachel was even in Toastmasters is beside the point. If there’s a problem, she wants to help.

The cast mates in Born This Way encourage and support each other. In one scene from Season 2, Rachel and three others sit around a table playing cards. Cole says he is graduating from high school and feeling nervous about getting a job.

Rachel tries to reassure him. “It’s not scary,” she says. “It’s so easy, Cole, because I have a job. … You’re moving on up, and that’s really cool.”

The show doesn’t coddle its cast members by dancing around tough issues. Emotional situations and painful realities are apparent. You see Rachel, for example, looking for love—and being rejected. But the reality of the situations is part of what makes audiences relate to the show.

“It may take a little bit longer or they might need a little more support, but [people with Down syndrome] can, and will, accomplish their goals.”

Korkoian, the executive producer, says the series challenges stereotypes and misperceptions that people have of adults with intellectual disabilities. Some viewers may have had little experience with people with Down syndrome, she says, but by watching these seven adults, they see that their aspirations aren’t so different from anyone else’s.

“It may take a little bit longer or they might need a little more support, but they can, and will, accomplish their goals and contribute to society socially, politically and economically,” says Korkoian.

Meanwhile, Rachel is as busy as ever. She is filmed in the TV series, works at her job with the insurance company and attends Toastmasters meetings. Though she no longer competes in the Special Olympics—she participated for more than 20 years in sports such as basketball, floor hockey and softball—she volunteers at the events and gives speeches as a Global Messenger. She also serves in an advocacy role: In 2014, she was appointed as a member of the California State Council on Developmental Disabilities.