Club president Joseph Gorin (behind the lectern, with gavel) and other members of the Special Olympics of Southern California Global Messengers Gavel Club.

Joseph Gorin was born with cerebral palsy and didn’t begin speaking or walking until he was 3. Which made what he did two years ago particularly special to his parents. At a Southern California leadership event hosted by the healthcare company Kaiser Permanente, Joseph, then 26, delivered a speech to an audience of 500.

He spoke of how much he enjoyed participating in the Special Olympics, where people with intellectual disabilities around the world compete in various sports. Joseph has flourished in floor hockey, softball, golf, track and field, and other sports. His mom, Ticky, was among those looking on as he spoke at Disney’s Grand California Hotel.

“We never dreamed he’d even be speaking [one day],” she says recently, recalling when he was a toddler. “It was pretty amazing to see him speak in front of 500 people.”

Toastmasters has played a vital role in his speaking success, say Ticky and her husband, David. Joseph belongs to a Toastmasters Gavel club in Santa Ana, California, whose members are Global Messengers. What are Global Messengers? They are adults of all ages who compete in the Special Olympics and speak to the public on behalf of the international organization. These special-needs athletes talk about how the sports and camaraderie of the Special Olympics have affected their lives.

There is also a Toastmasters Gavel club for Global Messengers in Hawaii. Chartered in 2006, it has 25 active members and meets monthly at the Special Olympics Hawaii office in Honolulu. In 2014, Toastmasters’ then-International President, Mohammed Murad, DTM, presented an award to Special Olympics Hawaii in recognition of the club. At the ceremony, Robert Cravalho, DTM, of District 49, said, “I think a lot of people in the district are very proud and happy and joyous when we have members of the Global Messengers club in our speech contests.”

The Global Messengers in the Santa Ana Toastmasters club are from the Southern California chapter of Special Olympics. The club chartered in 2012—the perfect time, because the 2015 Special Olympics World Games were held in nearby Los Angeles. The Global Messengers in the club played an important role in publicizing those World Games, sharing their own experiences, as well as information about the upcoming event, with the public and other athletes.

One club member, Debi Anderson, spoke at the opening ceremonies of the 2015 Games, in front of an audience of 80,000 people at the Los Angeles Coliseum. Her favorite Special Olympics moments include winning her first gold medal in track and field and the excitement she felt the first time she flipped over the high bar in gymnastics.

The improvements the Global Messengers have made from the time the Gavel club was formed until now have been striking, say members’ parents.

“It’s beyond belief—like night and day,” says Gary Osterbach, whose daughter, Rachel, is a member. “I give Toastmasters all the credit for that, but of course the Global Messengers themselves also get credit because they’ve worked extremely hard at this.”

The growing confidence and enthusiasm of club members is evident at a recent meeting. The Special Olympics of Southern California Global Messengers Gavel Club (the group’s full name) meets on Saturday mornings, and more than 20 people attend this day, about a third of them parents. Joseph Gorin is the club president. Soon after the meeting starts, members share announcements.

Rebecca Nerney, a longtime Special Olympian who has competed in golf, volleyball and equestrian events, stands up. “Yesterday I gave a speech at the Anaheim Breakfast [Toastmasters] club and I did very, very well,” she says with a smile. Furthermore, she adds, the Anaheim club donated 1,000 to the Special Olympics.

The mother of Toastmaster of the Day Josh Levine tells the group about the recent reading he did at his synagogue on the Jewish holiday of Rosh Hoshanah.

“I got a lot of compliments about how well he read,” says Ilene Levine. “He had pauses in all the right places.”

“One of our Global ­Messengers gave a ­powerful speech on the effect of bullying in her life. There wasn’t a dry eye in the room.”

In the club’s early years, many of the members didn’t want to speak at all—not even to each other, say parents. When asked about the Special Olympics, members responded with few words. But with consistent practice in club meetings came newfound confidence.

“Practice is so important if you are going to improve your skills, and each Global Messenger has improved their own skills at differing levels,” says Marilyn Skinner, mother of club member Jenny Skinner. While some members still rely on reading their presentations, others can memorize or improvise their speeches, she says. A number of the members have completed one or more Toastmasters manuals.

Early on, club members would become distraught if they made a mistake. “They would completely break down” over minor errors, notes Gary Osterbach, who served as the club’s president the first few years. Now, if they trip up or lose their place, they realize it’s OK and carry on.

Initially, parents and other Toastmasters served in the officer and meeting roles. But now, with just a little guidance, the members are doing all that themselves. “They are running their own club,” says Marilyn Skinner.

The prepared speeches begin at the club meeting. Adam Hogan tells about a time he locked himself in the bathroom and, to his mom’s horror, shaved off his eyebrows. The speech provokes hearty laughter from the group.

Then Joseph delivers a six-minute speech about his beloved family dog, J.J., a Jack Russell Terrier who became sick and died. He shares a photo of J.J. with the group. Joseph, a club member for three years, speaks with poise and confidence, rarely looking at his notes. 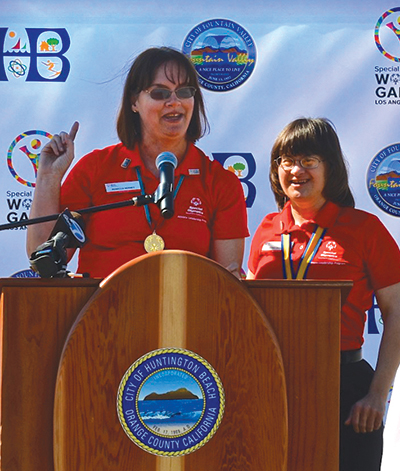 Rebecca Nerney gives a speech. At her side is fellow club member Jenny Skinner.

When he is finished, fellow member Pete Waldron says, “That was an outstanding speech, buddy, and I’m proud of you.”

Special Olympics executive David Armendariz says he, too, has seen a dramatic improvement in the members’ skills. It makes a difference, he notes, because when the Global Messengers speak at public events about their experiences, their words resonate.

“Guests gain a better sense of what the Special Olympics are about, and they have deeper insight into the humanity of each athlete,” says Armendariz, the Orange County region director of Special Olympics Southern California. “One of our Global Messengers gave a powerful speech on the effect of bullying in her life. There wasn’t a dry eye in the room.”

He adds that he would love to see more Toastmasters clubs for Global Messengers, both in the U.S. and other countries.

After the recent meeting, which also included Table Topics, members talk about their Toastmasters experience. Greg Kozlowski, 53, who represented the United States in golf in the 2015 Special Olympics World Games, says his most recent speech was about learning golf from his grandfather. His mother, Charlene, says Greg’s impromptu speaking skills have improved, noting that at one recent event, “he had to give a sort of improvisational speech to talk in front of 200 guests about his Special Olympics experiences. He was only told about 15 minutes beforehand but was prepared and confident based on his training through the Gavel club.”

Joseph, now 28, is a trained Special Olympics coach who mentors others in basketball and bowling. Being club president strengthens his leadership abilities, he says.

“I love to interact with my Global Messenger friends, and as the club president I like to help them improve their speaking,” says Joseph, who has given speeches to government officials, police officers and students.

In the recent club meeting, he is clearly in his element as he presides over the proceedings. Fittingly, Joseph closes the session on a positive note.

“Well done, everybody who gave speeches today,” he says, smiling. “Including me, of course.”


MORE ON THE SPECIAL OLYMPICS