Cast Your Vote for the Following Proposals 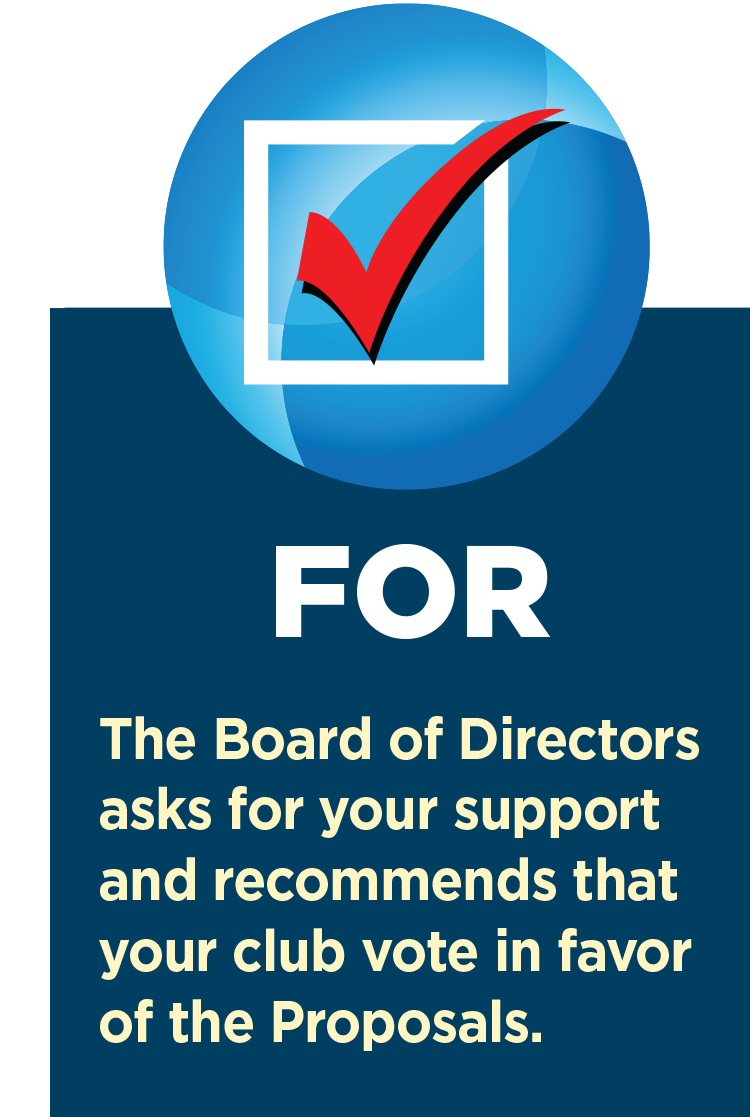 In the development of the 2015 Strategic Plan, the Board identified the need to expand and improve the use of technology. An area of consistent challenge at the club level is the payment of dues. Today, members pay the club by check or debit or credit card. Once payment is received, the club officer submits it to Toastmasters International. To do so, they must manually enter all personal and financial information into Club Central. Many individuals are uncomfortable with this process because of the inherent security and privacy concerns. Furthermore, data entry by club officers often results in ­inaccurate information.

The Board directed World Headquarters to develop technology that will create a simple and secure way for members to submit payments directly to Toastmasters International. Such technology should:

The Board proposes amending the Bylaws of Toastmasters International and the Club Constitution to allow individual members to submit their application and pay their dues online. The dues payment would not be fully processed by Toastmasters International until the individual is verified electronically by a club officer. Through this verification process the club officer certifies that the individual has attended at least one meeting and has been admitted to membership by the club. A similar process would be conducted for renewing members. Membership applications and renewals would continue to be accepted by regular mail.

a. Article III: Membership, Sections 8 and 12

b. Article IV: Revenue, Section 2b

The Bylaws of Toastmasters International require the club to pay individual dues by April 1 and October 1 of each year. This frequency of payments can be cumbersome for members, clubs and districts. In addition, some college and university clubs are challenged to pay dues on the current Toastmasters calendar because of their academic calendar. Several members have suggested that a possible solution would be to pay dues by anniversary date; however, that is only one possible solution. There are many other alternatives to explore.

Moving this provision from the Bylaws to policy enables the Board to determine the most appropriate solution and modify the calendar to the benefit of the members, clubs and districts.

a. Article IV: Revenue, Section 2a

The International Leadership Committee (ILC) begins its service on September 1 of each year; however, most committee members attend the Toastmasters Inter­national Convention, creating an opportunity for the chair to conduct orientation and begin the committee’s work there. Several past ILC chairs have recommended changing the committee’s start date from September 1 to August.

The ILC was established to review, evaluate and identify leadership development potential and opportunities throughout the organization, and to nominate international officer and director candidates each year for election at the August Annual Business Meeting.

The Board proposes that all candidates (including floor candidates) who stand for election at an Annual Business Meeting must have been evaluated by the ILC in the same election cycle in which the candidate stands for election. This allows the ILC to evaluate each individual’s potential and appropriateness for the role, which ultimately informs the members’ voting decision; additionally, it provides potential candidates with valuable insight into expectations and the competencies, skills and attributes necessary to be a successful Board member.

Today, an Immediate Past District Director may stand for election as an international director candidate while serving their term. This negatively impacts the districts by removing a valuable resource from the district leadership team. Successful completion of the Immediate Past District Director can help an individual develop and demonstrate the competencies, skills and attributes necessary to be a successful Board member.

International officers and directors are elected by the membership each year during the Annual Business Meeting. A candidate must receive a majority of the votes cast to be elected to any position on the Board of Directors. If a majority is not reached, a next ballot is conducted and the candidate with the lowest vote on each ballot is dropped before proceeding to the next ballot. In 2015, the members voted to amend the Bylaws to expand the number of candidates who may be nominated by the International Leadership Committee (ILC) for Second Vice President and international director. This has resulted in an increase in the number of candidates running for the Board and in the number of ballots that must be cast for many contested positions. It has also extended the length of the Annual Business Meeting. The Board proposes that a candidate must receive 10% or more of the votes cast to move to any subsequent ballot. The provision that the candidate who receives the fewest votes on any ballot is dropped from any subsequent ballot would remain in effect.

Individual membership in a club is classified as active, inactive or honorary. This classification is defined and further described in the Club Constitution, Article II, Sections 2, 4, 5, and 6. The intended purpose of the honorary membership classification was to enable clubs to recognize influential individuals within the community or sponsoring organization. The individual’s membership dues are paid by the club.

Over time, this intended purpose has been misinterpreted and expanded by some clubs to include paying for individual members with the intention of increasing the club’s membership count. Today, Toastmasters International only records whether a membership is paid.

The Board proposes that the Club Constitution be amended to clarify that honorary memberships are a club-level function enabling clubs to continue to recognize individuals for their own purposes; however, these nonpaid memberships would not count for any type of recognition program or award, nor would such honorary members have any membership privileges.