By Lisa B Marshall

“Have you ever been surprised to find out you weren’t as good or as smart as you thought?” That’s the first sentence from my book, Smart Talk. The goal? To make an immediate connection with the reader. It’s the same goal I have for speeches. Powerful opening words, when combined with strong stage presence, can seductively draw the audience in, cleverly hint at the topic and make an emotional connection with the audience.

That’s why, when preparing a keynote speech, I spend 10 times more time developing and practicing the opener than any other part of the speech.

You only have seconds to make a powerful first impression on the audience. And if you don’t hook them, you’ve lost them.

Toastmasters World Champions of Public Speaking are experts at creatively grabbing attention and winning over audiences at the start of their speeches. By analyzing their methods and techniques, and also what could go wrong with them, you can create even stronger openings to impress your audience. 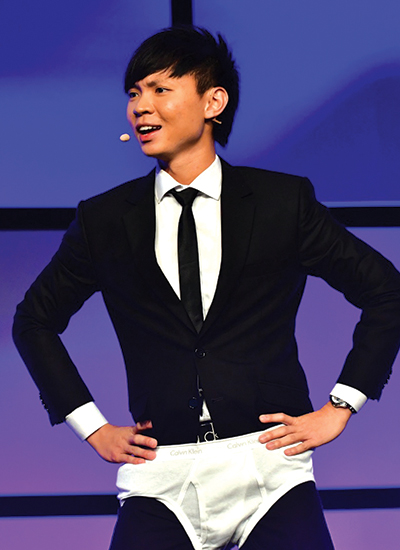 For a full eight seconds Tay says nothing; he just looks around the room confidently. Then he pulls out a pair of white underwear, slides them over his suit’s pant legs and stands there, arms akimbo, staring intensely. After 25 seconds of silence he finally shouts, “Hey, loser, how do you like your new school uniform? I think it looks great on you.” After a moment he explains to the stunned listeners, “Those were the words of my high school bully, Greg Umberfield.”

Why does it work? First, the underwear is unexpected and inherently funny. Second, silently pulling white underwear over dark suit pants creates an unexpected sight gag. It produces laughter, contrast and suspense—why is he doing that? Then the startling first words increase the mystery. Finally the tension is released when the audience realizes Tay is talking about being bullied. All these steps together masterfully set the stage, making the audience receptive to the speech’s powerful message: We are our own worst bullies.

But visual humor is tricky. It needs to be thought-provoking, not offensive. What you think is funny might not be universally understood, or even considered funny. Also, it requires prolonged confident silence; if the speaker seems uncertain, the audience will be uncomfortable. They may start to worry and wonder—has something gone wrong? Finally, the presence of a funny prop can be quite distracting if not presented and removed from sight at exactly the right times. Yes, Tay did everything just right. But this kind of opener takes careful planning, comedic skill and immense poise.

“The Power of Words” 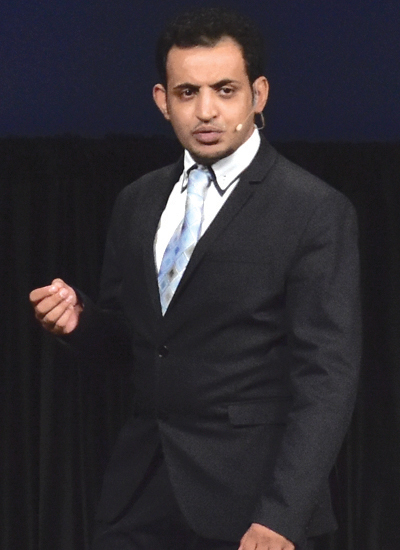 He walks onstage, puts a cigarette in his mouth … then looks up as if noticing the audience and says, “What?”

As the audience laughs, he continues. “Oh, you all think smoking kills? Ha-ha, let me tell you something. Do you know that the amount of people dying from diabetes are three times as many [as the] people dying from smoking? Yet if I pulled out a Snickers bar, nobody would say anything.” He continues by saying that faulty DNA is the leading cause of lung cancer, not smoking. And then surprises us when he admits that he made all of that up!

Qahtani uses fabricated statistics, along with visual humor, to creatively demonstrate his point—which has nothing to do with diabetes or smoking. His topic? The persuasive power of words. Had he just come onstage and said, “Your words have power,” the audience would have yawned—instead, the audience experiences the main idea and is primed to listen. That’s the power of a demonstration.

However, demonstrations can be risky—particularly at the beginning of a speech and if they involve the use of props. Even if you sufficiently rehearse, unsettled nerves can cause mistakes in execution, causing the demonstration to either take too long or fail entirely. It is difficult, if not impossible, to recover from a failed opening demonstration. 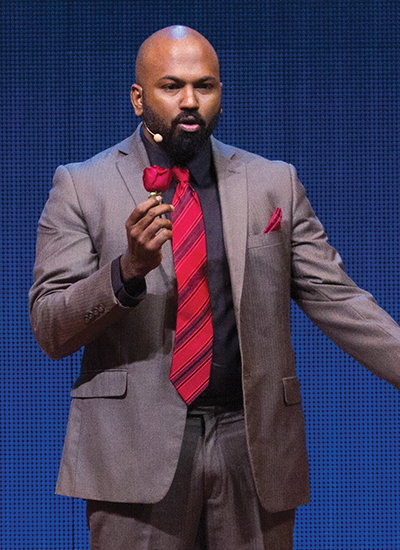 He walks onstage with a red rose in his pocket, then takes it out, smells it and says, “You and I are not very different from this flower. Just like this flower is unique, you are unique.”

Technically, Hettiarachchi seamlessly integrates two methods: comparison and prop. Comparisons help audience members quickly understand abstract or complex ideas by connecting those ideas to what they already know, and props create intrigue and interest. The audience members wonder, Why does he have a flower? In this case, his response to that unspoken question is a comparison, which in turn heightens the appeal. Had he used only words rather than the additional prop for ­reinforcement, the comparison wouldn’t have been as strong.

One danger of comparisons is taking them too far. In fact, the ancient Romans had a saying: “All analogies limp.” None are perfect, so when speech-making, stick to one or two key com­parative elements. Extending the comparison too far can weaken the speech.

“Changed by a Tire” 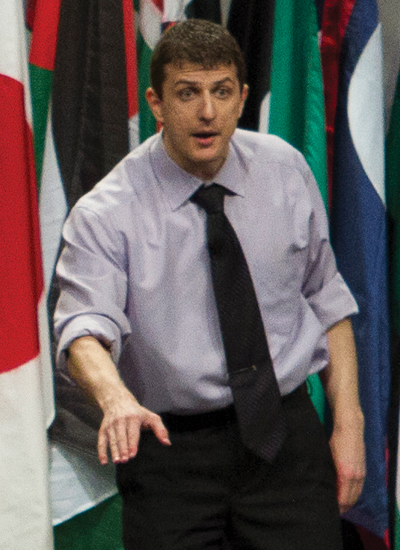 “The steering wheel jerked. I tried to keep the car in control. That night in Chicago ... a flat tire changed me … Mr. Contest Chair, Toastmasters and guests, have you ever done anything stupid?”

Chiasmus is a reversal of words in two or more parallel phrases. The most famous example? Former U.S. President John F. Kennedy’s “Ask not what your country can do for you, ask what you can do for your country.” Why is Vasilev’s phrase a quasi chiasmus? Because the audience expects him to say, “I changed a tire,” not “a tire changed me.” That’s what makes this phrase so appealing and memorable. It’s an unexpected reversal of the usual order of those particular words.

A well-executed rhetorical chiasmus requires the reversal to be obvious, which often means the words slightly change in meaning. For example, notice how the word “power” changes in this quote from former U.S. President Bill Clinton, “People the world over have always been more impressed by the power of our example than by the example of our power.”

To add even more strength, Vasilev follows the quasi chiasmus with a universal question, which allows the audience to put themselves into the situation. Not everyone has experienced a tire blowout, but everyone has done something stupid. If a universal question is crafted well—thoughtful phrasing is the key—it will be relevant to everyone in the audience and it won’t feel gratuitous.

“Trust Is a Must” 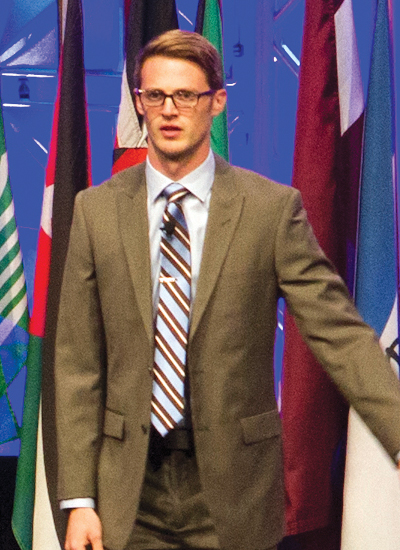 First, Avery paints the scene: He’s at the altar, about to answer the most important question of his life—“Do you promise …” Then he flashes back to his high school days and the false ­promises he made to his mother. As the story of his life unfolds, he leads us back to his wedding, and at the end we hear his answer.

We’ve all seen flashbacks in movies. Why does it work in a speech? For the same reason movie directors do it: You start on a high note of action, creating immediate suspense. And the structure requires a return to the beginning at the end, which naturally creates a satisfying circle of closure.

However, flashbacks can be risky because an audience may not notice that a flashback has occurred and they may get confused. It’s critical to say and show that the time frame has shifted. Avery solves this problem by physically stepping back on the stage while saying, “Rewind like an old-school VHS tape.”

“I Will Be There” 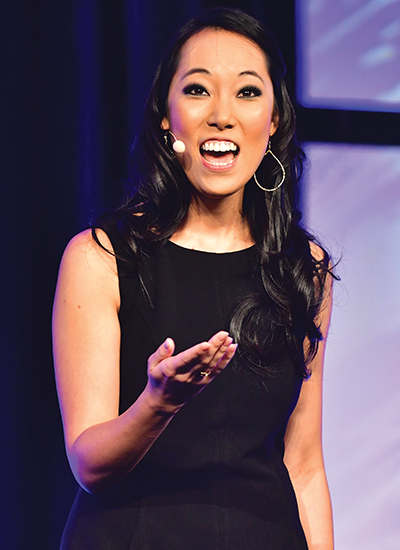 Lee didn’t win the 2016 championship, but her speech offers another example of a strong and creative opening. She starts by speaking slowly and with emotion. “‘I … will be there.’ Those four words can help you make a friend.”

She highlights the importance of these words by making that phrase the title and by repeating it throughout the speech. Lee’s opening shows that quotations at the beginning of a speech don’t have to be from literature. They can be from someone you know, or from the news, or from an authority or celebrity. Her opening also demonstrates that quotes need to be delivered in a natural, ­conversational ­manner, with direct eye contact.

What typically goes wrong? If a quotation is too long or has a complicated word structure, it can be difficult for an audience to understand. They won’t get it. Or if the quote is read, it forces the speaker to lose eye contact and connection. Finally, some people choose a quote that’s meaningful to them but not necessarily to the listeners, so it’s important to ensure that the quote is relevant to your audience.


One Size Does Not Fit All

It’s important to notice that all these speakers chose different primary techniques and usually combined several methods for the greatest impact. And, very likely, each speech took several weeks to initially craft, and required multiple deliveries and modifications to refine these excellent openings. The goal for you is to use these examples as starting points for your own creativity. By understanding why these openings work, and what can go wrong, you’ll be better equipped to develop your own winning opening.

Lisa B Marshall is a communications expert who delivers consulting and workshops, the author of Smart Talk and Ace Your Interview, and host of the Public Speaker and Smart Talk podcasts. Learn more by visiting her website.