Settle your nerves with these simple strategies for sharp responses. 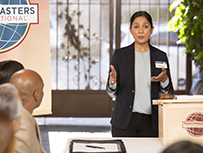 If you can, just stop caring about Table Topics. Remember, everyone in the audience has been in your position, has probably dried up at some point and is willing you to do well, so you don’t need to worry about their reaction.

Give yourself time for your nerves to die down and for you to think of something to say. Sit at the back of the room and walk slowly to the front. Acknowledge the audience and repeat the question. If you need to, just talk for a while about something vaguely related to the theme, or even about something totally unrelated: Sooner or later, inspiration will come.

Go with the first little idea that comes into your head.

Sooner or later, a little idea will pop into your head. Even if it’s just a little idea, start talking about it. Don’t reject it in the hope that a bigger idea will come along: The little idea has to be expressed first. If you do reject it, it’ll sulk, and will block the big idea from ever getting through.

Express an opinion, right at the start.

Unless you’re a ­beginner, try not to give a long introduction. Instead, answer the question or express an opinion, and do so at the start. This is easier for closed questions (e.g., “What was your favorite holiday?”), but you can also do it for open questions (e.g., “Talk about holidays”). So long as you can seize your little idea and turn it into something concrete.

Remember the rule of three.

You can put some structure into your speech by breaking it down into three main points that justify your opinion or reinforce it. (For example, “My best holiday ever was in Tibet, and there are three reasons why.”) You don’t need them all before you start: Instead, you can think of the first point while answering the question, then think of the second point while talking about the first, and so on. It’s surprising how often this works.

Alternatively, you can develop your argument by using British writer Rudyard Kipling’s “six honest serving men” (what, why, when, how, where and who) to trigger ideas in your mind. (For example: What was my favorite holiday? Why did I go there? When did I take the trip? How did I travel? Where did I stay? Who did I meet?) By actively looking for answers to these questions, we can give ourselves both material and the framework to put together a well-structured speech.

Know when to stop.

Try not to ramble your way through a long conclusion. Instead, recap your answer and the main points of your speech, finish with a punchy ending and hand it back to the Table Topicsmaster.

Prepare something in advance.

You can often use the theme of the topic to suggest a framework for your speech, a style of delivery or a direction to take it in. When your question arrives, you can fit your answer into the framework you’ve already thought of.

Draw on your own experiences.

When you’re given a Table Topic, you can ask yourself if there’s anything in your own experiences that will answer the question or illustrate your argument. As well as making it easier for you to answer the question, a personal reply will often sound more heartfelt than other answers you might give.

The best Table Topics responses are often those where the speaker avoids a serious or conventional answer, and instead tries something unusual or entertaining. For example, you can deliver your speech in character, or deliver an unexpected or contrarian argument. By doing this, you can grab the audience’s attention and free yourself from the constraints of a conventional approach.


And a bonus tip:

Finally, keep practicing. The more you do it, the less nervous you’ll become, the easier you’ll find it and the more you’ll enjoy it.
Christopher Cox, DTM is a past winner of the District 71 Humorous Speech and Evaluation contests, and a Table Topics finalist. He is a member of Cambridge Speakers club in Cambridge, England, and works as a freelance trainer and consultant in telecommunications.