Funny You Should Say That
January 2017

That would be April, of course – but it starts in January. 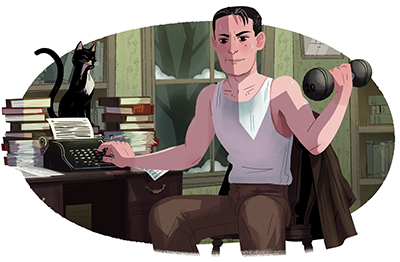 There has been much speculation about what T. S. Eliot meant when he wrote “April is the cruelest month.” April, after all, is the harbinger of spring, the assurance that winter’s dark, frigid miseries will soon give way to summer’s sun-dappled delights. What’s cruel about that? Well, now we know. Scholars have discovered a gym-membership card among Eliot’s papers, the product of a New Year’s resolution he had made to get physically fit and thus become the only poet in England who didn’t look like he’d just spent a year in solitary confinement.

The card was designed to be punched every time it was used. January had punches for almost every day, February for every other day—a slight fall-off, perhaps, but not enough to prevent Eliot from writing in his diary on February 25, 1918, “Looking in the mirror I couldn’t help but think to myself, ‘Yeats would kill for abs like these.’” In March, however, the punch holes covered only a quarter of the month, and by April there were none. His diary entry for April 30 of that year tells the tale: “Not gone to the gym once this month. Failure! Failure! Failure! Can’t I do ANYTHING right?! My New Year’s resolution sagged like my stomach. I was so close to hitting my target training heart rate zone. And what did I do instead? Sit here like a lump of bread pudding writing some stupid poem called “The Waste Land.” Oh April, you have been cruel to me.”

I’m telling you this because it’s January and you are Toastmasters—ambitious people eager to better yourselves. You’re going to make New Year’s resolutions. I know you are. And that’s fine. I just don’t want April to be your cruelest month. I don’t want you to reach that glorious month when the earth is bursting forth with new life and all you can hear is a voice in your head screaming, “Failure! Failure! Failure! Plus I still have to do my taxes!!”

I’m telling you this ­because it’s January and you are Toastmasters—ambitious people eager to better yourselves. You’re going to make New Year’s resolutions.

So pick something easy, something you absolutely cannot fail to do. Like breathing. You laugh? Phrased properly this simple act becomes a goal you can be proud to achieve: I will inhale AND exhale every second of every day of this year—whether I want to or not. And if I get a cold and can’t breathe through my nose, I will set my face like flint against the forces of negativity and breathe through my mouth! If you can accomplish this from January 1 to December 31, you will have done better than the 55.3 million people every year who don’t, if you know what I mean.

Another fail-safe New Year’s resolution: I will grow one year older. You cannot avoid this even if you try—in fact, even if you lie about your age and spend 10,000 on miracle anti-wrinkle creams, including (I’m sorry but it’s true) those recommended by the world’s leading dermatologists. All you have to do is sit in your Barcalounger and wait for the earth to rotate 366.242 times on its axis. The only way you can possibly fail at this is if you are somehow unable to keep the first resolution mentioned above, in which case New Year’s resolutions won’t really be an issue anymore, if you know what I mean.

Now, I’m no fool. I hear you out there, snickering at the mundane nature of these suggestions. Is this a joke? Before you answer that question, let me ask a few of my own. If you are determined to better yourself through some challenging activity, why haven’t you done it already? Because it’s hard. It requires commitment and persistence. You may have those qualities, but can you sustain them over 365 days? With all due respect, probably not … or you would have done it by now. And if you do not have those qualities on December 31, what makes you think they will magically appear on January 1? I know that sounds harsh but I’m only trying to save you from the agonies of Eliot. If you take my suggestions and start right here in January, by April you will be able to say with confidence, “I have been breathing and aging for four straight months now. I can do this!”

It may not be climbing Mount Everest, but it’s a success. ­Failing at yet another New Year’s resolution? That’s just cruel.