Funny You Should Say That
February 2017

How do I love thee? Let me count my money. 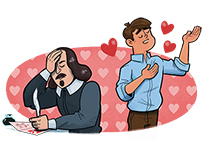 It’s February, and that means Valentine’s Day. Lots of other things happen in February worldwide but the 14th day of the month is the one that really counts, the day when merchants sell 144 million cards, 35 million boxes of chocolates and 320 million roses, generating 20 billion in consumer spending and belying the romantic notion that love is free. The origins of the day are shrouded in mystery and myth, unless you accept my father’s confirmed belief that Valentine’s Day is “a bogus invention of greedy retailers to sell cards and candy and flowers!” This didn’t stop him from buying my mother a card, candy and flowers, but … well, let’s just say that he preferred to be a hypocrite with a happy wife than a cynic with an unhappy wife. Smart man.

The truth is there really are historic origins for Valentine’s Day and its association with romance, going all the way back to the ancient Roman fertility festival known as Lupercalia. This involved the sacrifice of a goat and a dog, whose skins were used to gently whip willing young women in hopes of increasing their fertility. Not exactly the same as in vitro fertilization at the Mayo Clinic but Rome did produce 90 million people so … one way or another those folks knew how to get the job done.

Moving down through the centuries we come to France and England where, in the 1300s, people believed February 14 was the beginning of the bird mating season. This may seem unlikely, since February was the time when every bird’s primary objective was to avoid freezing his tail feathers off. On the other hand, if the larks were huddling together for warmth, it’s not hard to see how one thing could lead to another.

Giving credence to this avian theory is no less a personage than the Father of English Literature, Geoffrey Chaucer, who referred to Valentine’s Day in a poem thusly: “For this was on Seynt Volantynys day when euery bryd comyth to chese his make.” (“For this was on Valentine’s Day when every bird comes to choose his mate.”) So maybe there is some truth to the bird thing, although you would think that, of all people, the Father of English Literature would know how to spell.

The modern Valentine’s Day card lets you express your deepest, most personal feelings of intimacy in words written by somebody else.

Then there’s the story of the three martyrs, all named Valentine and all meeting their fates on the same day, which was—you guessed it—February 14th. The story most often told is of a good friar who, in A.D. 270, displeased the Emperor, Claudius the Cruel (and you don’t want to displease a guy with a name like that). Sentenced to prison and death, Valentine befriended the jailer’s daughter and, on the way to his execution, handed her a note that said, “From your Valentine.” Kind of sad, really—not what you want to think about on a day meant for love and affection. On the other hand, if you are a person who has completely forgotten it’s Valentine’s Day and you come home to your significant other with no card, candy or flowers, staring death in the face doesn’t seem quite so far-fetched.

An actual written declaration of undying love for one’s paramour—the Valentine’s Day card—didn’t start until the Middle Ages with handmade paper notes, and then only to a limited degree since 99 percent of the population was illiterate. As a result, from the 12th to the 15th centuries only 13 Valentine’s Day cards were actually composed.

Then came the Enlightenment and the education of the masses. Finally, the butcher, the baker and the candlestick maker could write their amorous feelings in words. They just didn’t know what to say. Hence, the origins of our modern Valentine’s Day card, which lets you express your deepest, most personal feelings of intimacy in words written by somebody else. In those days it was the poets, including Shakespeare, who actually had a side business writing greeting cards. Here’s an example:  Tomorrow is Saint Valentine’s day/All in the morning betime/ And I a maid at your window/To be your Valentine. The Bard liked this one so much he had Ophelia say it in Hamlet. Of course, Ophelia goes nuts so … by all means get your Valentine something nice. Just don’t overdo it.