From the Kitchen to the Stage

Former executive chef finds peace at the podium after two decades of cooking. 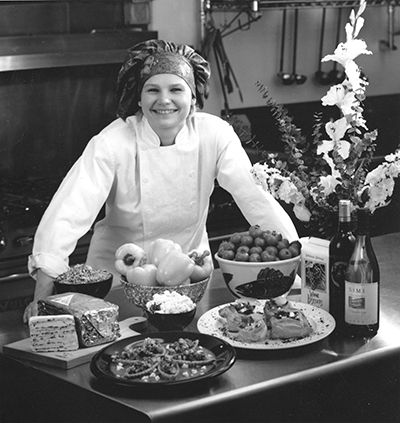 The first time Heather Turner, ACG, ALB, went to a Toastmasters meeting, she was 18 years old and painfully shy—the opposite of the easy, articulate communicator she is today. Feeling awkward, she didn’t return for a couple of decades.

A graduate of the Culinary Institute of America, Turner has been an executive chef in Vermont at the Cliff House at Stowe Mountain Resort and at Harvest Market in Stowe, and on Cape Cod at The Olde Inn. In 2003, she hung up her apron and founded Forfeng Designs, a hospitality consulting business, and Forfeng Media, offering social media training and workshops. She continues that work today, speaking at conferences around the United States and hosting webinars on social media. She is also marketing manager for the Professional Association of Innkeepers International (PAII).

Turner has long since overcome feelings of awkwardness from her first Toastmasters experience and is active in three clubs in Connecticut, Cromwell Community Toastmasters, Speech Weavers club and Mass Mutual club, and has served as area director. She received the 2013-2014 District 53 Governor’s Award for her dedication to excellence in communication and servant leadership. Heather recently talked to us about cooking, short tempers and her career in public speaking.

What inspired you to join Toastmasters?

I used to be really shy, so someone suggested it as a way to get out of my shell. At my first meeting, I was the youngest person by decades, and all the members were men. It was very formal, and nobody smiled—nothing like it is today.

When did you learn how to cook?

I learned in my first job in Kingston, New York, when I was 13. I’ve always been a bit of a bookworm, and my appetite for books outweighed the amount of money I had to spend to buy them. So I got a job at a gourmet café and catering company. I remember they had a “death by chocolate” cake that took three days to make.

Preparing food with others requires a lot of communication. What did you learn from that?

In my first job, the kitchen was small; we all worked around an island and had to be very coordinated. Over the years I developed a really bad temper, primarily I think, because I worked with a lot of chefs who worked that way—yelling, screaming, throwing things.

My breaking point came on New Year’s Eve at the Cliff House at Stowe Mountain Resort. At 1 or 2 a.m. we were super busy and running low on food when a server dropped our last lamb rack and filet mignon on the floor. I freaked out and went nuts on her. As she stood on the other side of the line, tears streaming down her face, I had this aha moment and thought, what am I doing? I had high blood pressure, an ulcer, and I was making this poor lady cry. From then on, it was different.

“A well-run kitchen is like a well-run Toastmasters club with all sorts of personalities that mesh well.”

I think there’s a fine line between management and uber-management. Most of the best-run kitchens are either so well organized that they run seamlessly or they’re run like a dictatorship and everyone is afraid of the chef. Many of my Toastmasters talks include the crazy chefs I’ve worked for. I’ve got the French accent down pretty well.

When did you make your career move?

After 20 years of cooking, I got burned out. I’d always had an interest in graphic design, and so I set out with a computer and a digital camera to do web design for restaurants. My business has evolved significantly since then.

What made you join a club again after so many years?

When I started my business in 2003, I was doing workshops and getting engagements to speak in front of large groups at lodging conferences. At one conference, they needed someone to speak to a crowd of about 500. I got up and froze for what felt like 20 minutes. I remember thinking it would be nice to be more polished. I wanted to learn how to slow down to make points so people would remember them.

How has cooking prepared you for leadership roles in Toastmasters?

A well-run kitchen is like a well-run Toastmasters club with all sorts of personalities that mesh well. If you have someone who is really egotistical, you get conflict. If you get people working for the common good, you can work smoothly together and make progress.

What have you learned about public speaking?

Slow down! When I speak now, I speak a lot slower. Early on, when speaking at a seminar, I tried to cram as much information as I could into a 60- or 90-minute presentation. As I slowed down, feedback showed me that my audience had better retention rates.

Tell us about your audiences.

When I do workshops, maybe I’ll have 12 in the audience. When I speak at conferences, I get 50 to 600 people. Generally, it’s for those in the lodging industry, but I’ve done presentations for Realtors and insurance companies. I also do hands-on social media training webinars.

How is running a webinar different from public speaking?

You have to be comfortable with the technology. When you’re speaking to an audience, you can see them. Are they bored or puzzled? Do they have questions? Are they paying attention or playing on their phone? In a webinar, you can’t see any of that because you’re talking to a computer. The only sign you have that someone isn’t paying attention is an indicator that shows they’ve switched to another tab on their screen.

There’s a time lag between when the presenter shows something and when it shows up on a laptop (or on the participants’ computers). I use both my main desktop and a laptop, but I talk to the laptop because the timing is more aligned to what the audience sees.

How much has Toastmasters influenced your social life?

Half of my friends are innkeepers and the other half are Toastmasters. My Toastmasters friends are of every age, every profession and from every walk of life. I enjoy mentoring new members and seeing how people interact. When we have guests, I encourage them to visit other clubs because each has its own dynamic.

Do you still cook?

I do! My husband does about one-third of the cooking and I do the rest. We cook everything—Indian, Moroccan, French, Mexican. My vice? Goat cheese.

Melanie D.G. Kaplan is based in Washington, D.C., and writes for many publications, including National Parks magazine and The Washington Post. Visit her website at www.melaniedgkaplan.com.