From One Club to 164 and Still Going Strong!

Wow! Who did that?

The credit goes to Peter Kossowan, DTM, in Edmonton, Canada. He joined Toastmasters in February 1970, and he’s practically built an entire Canadian district by himself. At age 82, after inspiring and mentoring hundreds of people, Kossowan is still committed to Toastmasters.

What’s his secret? To put it simply: He is passionate about serving the community. Kossowan has a long history of involvement with dozens of community groups besides Toastmasters. In one podcast interview, Kossowan said he is inspired by these words from the playwright George Bernard Shaw, who said, “My life belongs to the community, and as long as I live, it is my privilege to do for it whatever I can. I want to be thoroughly used up when I die, for the harder I work, the more I live.” 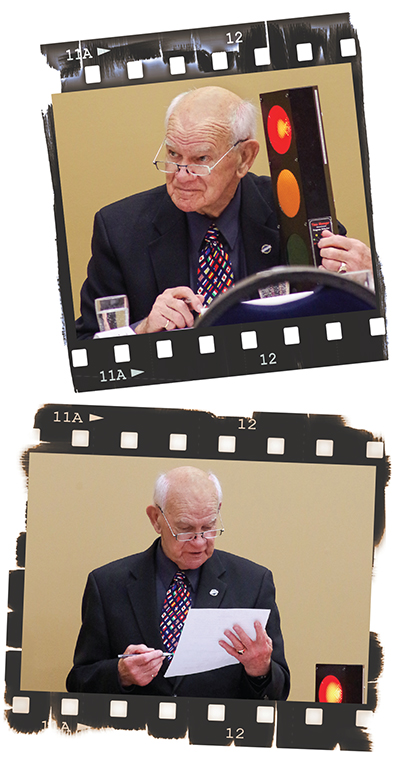 Kossowan prospects for potential clubs wherever he goes. He invites the people he meets to club meetings to demonstrate how members benefit from the experience. He invites visitors who are interested in joining a club to speak with him and tailors his pitch to the specific needs of the prospective member.

His commitment to the community helps explain why Kossowan is drawn to Toastmasters, an organization that identifies service to the member as a core value. He credits having been born to a generous and kind mother who developed in him an attitude of service, an attitude that is evident to everyone who meets him. Kossowan’s close friend Past International President Neil Wilkinson, DTM, says of him, “Kossowan always wants to put somebody else first, to connect you with someone who can help. That’s what he’s all about—helping others.”

Kossowan’s 46-year Toastmasters journey started when a friend invited him to attend a club meeting. He immediately saw how Toastmasters could help him grow in his financial planning business by improving his presentations and sharpening his listening skills. He increased his sales-closing techniques—the same skills he uses to launch new clubs.

“I’ve been to many Toastmasters demo meetings where the people conducting the meeting don’t ask for the sale,” he says. “They don’t invite visitors to join. You have to ask for the sale!”

Chartering a new club may seem daunting, especially if you’re a new member. But if one member can do it 164 times, surely anyone can do it once. And you can too, if you fit the following criteria:

2 You like people. Kossowan believes nobody has too many friends. “Some of my best friends are Toastmasters,” he says. He loves watching people develop. “They walk tall and feel valued and it shows in their body language,” he says. “Each individual is unique, bringing wisdom and knowledge to the group.”

3 You see the big-picture impact. Toastmasters doesn’t just change people; it also affects organizations. One club Kossowan helped build was for an association for people with learning challenges. “We helped give a voice to those who’ve never had a voice before,” he says, “and it changed the organization’s culture.

“One woman, a member with learning challenges, gave a speech at their fundraiser and it generated 145,000 in contributions!” That’s a big-picture impact that goes far beyond counting ahs and ums.

4 You’re comfortable asking for help. Kossowan has developed relationships with many phenomenal, helpful members. “Their values coincide with mine,” he says. “I trust them to do whatever task they choose to do.” To conduct a demo meeting, for instance, Kossowan uses five volunteers. He has a one-page flier that describes the tasks for each one. “Should a new volunteer join us, I send them the flier so they know what is expected of them,” he says. “It works like a charm. I have sponsored clubs hundreds of kilometers from home using this technique.”

If those four qualities resonate with you, why not jump in and sponsor a club? Here are some tips to help: 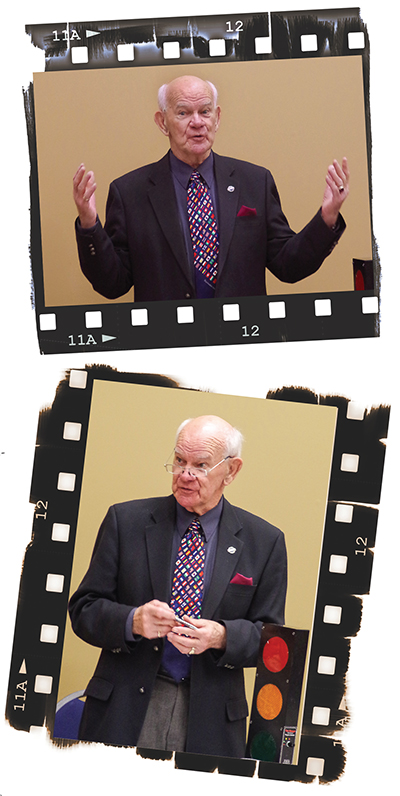 Prospects are everywhere! Look where large groups gather. Kossowan believes any group of more than 250 people can sustain a club. He has built clubs within the blind community, amid ethnic groups and nonprofits, and in prisons, universities and government settings. Maybe you work for a big company or are part of a large congregation. Be watchful and learn from Kossowan, who is constantly prospecting for potential clubs.

“Recently, at a funeral, I met the executive director of an organization that would benefit from Toastmasters … we have a demo meeting scheduled next month.” Work with district leaders, especially the club growth director, whose job it is to prospect for new leads. Kossowan handles several prospects simultaneously. Immediate Past District 42 Governor Doris Henn, DTM, says Kossowan is very organized and keeps a spreadsheet of all leads. “I have passed leads on to him,” she says, “but he also generates many of his own. Sometimes he’s working on 20 leads at once.”

Be patient. Most visitors are not accustomed to the applause, structure, speaking and evaluating that are part of the club experience. Some won’t buy into Toastmasters until they see the benefits for themselves, which could take time. Sometimes new marketing techniques are needed.

Kossowan is currently working on establishing a corporate club. He says they have 12 members, and in six months, that number has not changed. “I am advising them on how to invite guests,” he says, “but I must wait until they are prepared to accept the knowledge. Patience!”

Try a softer invitation. It’s tempting to exclaim You should join Toastmasters! and call that an invitation. However, the word should can be counterproductive. Denver psychologist Susan Heitler, Ph.D., writes in Psychology Today that although the word should sometimes gives good guidance, “More often it sets unrealistic expectations, induces guilt and decreases the desire to do what you otherwise might want to do.”

With his 55 years of sales experience, Kossowan prefers to take a softer approach: “Why don’t you join me at a Toastmasters meeting and see for yourself the benefits?” This works!

Marketing is key! You may have an advantage if you want to start a club in your company. “Today, many more human resource managers are aware of the value of Toastmasters,” Kossowan says. “Invite them to a meeting to show how it benefits employees.” To start a community club, use social media, public bulletin boards and word of mouth. Invite people with leadership ability and ask them to invite people in their network. Talk about it everywhere.

“I moderated a political forum,” Kossowan says, “and I mentioned Toastmasters. At the end, I invited those interested in Toastmasters to see me afterwards. Ten people approached me! We arranged for a demo meeting and chartered in one meeting.”

Plan a demo meeting: Give a demonstration of an actual meeting. Kossowan uses a team approach with his volunteer demo members, giving each one a clearly defined role. Assign a Toastmaster, speaker, evaluator, Table Topicsmaster, timer and grammarian.

Another approach is to bring short scripts describing each role, which visitors read out loud. One visitor reads the role of evaluator, another reads the role of timer, etc. This can be done with only two Toastmasters—one serving as Toastmaster, evaluator and general evaluator and the other doing a speech and leading Table Topics. Be creative and make certain to cover the integral components. Visitors are more likely to join if they are involved.

Sell the benefits and the features. We teach communication and leadership skills. So what? Why is that important to a prospect? Tailor the benefits to the specific group. To charter a corporate club, management needs to know what their employees will gain from it, says Kossowan. He tells them, “It’s ongoing and cost-effective leadership training. Employee morale goes up and they make better sales presentations.”

“Kossowan always wants to put somebody else first, to connect you with someone who can help. That’s what he’s all about—helping others.”

Greg Gazin, DTM, one of the hosts of the Toastmasters podcast series and Kossowan’s good friend, has participated in many demo meetings with the super club-starter and says he directs his pitch to the specific needs of the audience. “While I have heard many variations of his pitch or call to action,” Gazin says, “it never gets tiring; it always feels fresh.”

Collect success stories, including your own. Craig Valentine, the 1999 Toastmasters World Champion of Public Speaking, teaches the “then-now-how” technique of persuasion. “Back then I was terrible. Now I’m not. Here’s how I improved.” What’s your Toastmasters “then-now-how” story? Tell it! Brag about the people in your club who were terrified to speak and stumbled over their words but were transformed after a few months. Success stories sell.

Ask for the sale! Before the close of your demo, share some short success stories and let the Toastmaster of the meeting take questions from the audience. Finally, use Kossowan’s brilliant yet gentle technique to ask guests to join: “Knowing what you know about Toastmasters, how many of you will support the formation of a club? Raise your hand.” Kossowan raises his hand, as do the volunteers. “Should 10 or more hands go up,” he says, “we arrange for another meeting and ask each visitor to bring a guest.” That is how Kossowan recruits the 20 members needed to create a club.

District 42 Director Marg Faryna, DTM, has watched Kossowan at demo meetings. She says he ends it this way: “If there are no other questions, I have a question for you. Will you complete the membership application and leave it with us today?”

Chartering a club is incredibly rewarding—it brings the greatness of Toastmasters to a world that desperately needs strong leaders and communicators. You are qualified to start a club, and you are up to the task.

As Gazin says, “When Kossowan calls for help with another potential club, I say yes—just as I did the first time over a decade ago when I was both vice president education and area governor and the thought of chartering a club gave me a serious case of the butterflies. Today, I’m no longer afraid to step up to the challenge.”

Your journey to 164 clubs starts with one. Decide today to do it.


Editor’s Note: For a detailed guide on the club chartering process, download the free How to Start a New Club manual.