What Do You Mean by That? 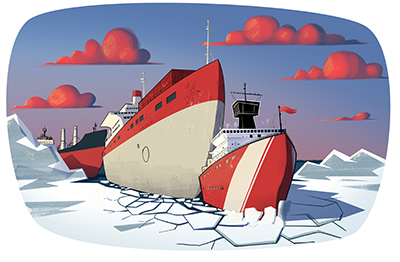 Our first speech in Toastmasters is called the Ice Breaker. But how many of us realize that the name is shared by small ships called icebreakers? This conjures up images of rescue ships freeing up larger ships that are stranded in frozen seas. The next time you need to coach a new member on that challenging first speech, tell them it’s a warm and cozy experience compared to the alternative icebreaker experience.

But the Ice Breaker is just the beginning of our journey in Toastmasters. Now that speech contests are underway, lots of us find ourselves “in the limelight” when onstage. But just what is limelight? In the early 19th century, before the invention of the electric lightbulb, scientists found that quite a bit of light can be generated by heating a cylinder of lime with a flame, especially when the cylinder is placed in front of a reflector or behind a lens.

Although limelight had been used for other purposes, possibly its earliest known use to illuminate a public performance was in 1836, when magician Ching Lau Lauro juggled outside at Herne Bay Pier in Kent, England. The following year, limelight was used indoors to illuminate the Covent Garden Theatre in London, and the trend took off around the world. Limelight then became used to highlight different performers and speakers, just as modern-day spotlights are now used. But today, unless the power goes out, the lime can be left at home.

For those of us who speak with no preparation, we do Table Topics. Some say we speak “off the cuff.” What do cuffs have to do with it?

There is an old practice in which men sometimes wrote informal, impromptu notes on the detachable and disposable cuffs of their dress shirts. This was a practical solution, as it allowed men to travel without a notebook. They could record their ideas and still wear their shirt long after the note and cuff had been discarded.

That must have been convenient, for example, when in days gone by, livery stable owners recorded the credit they issued to their customers on their shirt cuffs. As it turned out, however, these informal contracts were not very cost-effective, because debtors sometimes went from town to town to borrow without paying off the debt they owed for boarding their horses at the stables. These people were known to live “off the cuff.”

You can still buy detachable shirt cuffs today, although they’re certainly not required attire in Toastmasters. But if you’re looking for your next speech idea, you need not look further than the phrases that you use.