February 2023 View PDF
Geoff Regan, 56, is Canada’s Speaker of the House of Commons. He wears the traditional Speaker’s robes in the House chamber.

Not long after he was elected Canada’s new Speaker of the House of Commons in December, Geoff Regan gave a public shoutout to Toastmasters. He tweeted this message to his 7,000-plus followers: “Thanks to speech therapy and fantastic Toastmasters, I gained confidence to pursue career in politics.”

Besides the tangible skills he learned—skills he says have been critical to his political success—Regan gained something else.

“The most important part of my Toastmasters experience, the number one thing I learned, is that working toward a worthwhile goal builds self-esteem,” says the veteran member of Parliament, who lives in suburban Halifax in Nova Scotia. “When you set a goal, like working toward your next speech or participating in a speech contest, you learn and grow. You build self-esteem and it makes you feel good about yourself.”

Regan says one of the most valuable things he learned in Toastmasters was how to lead a meeting. He’ll need every ounce of that ability in his current job. Canada’s House of Commons—which along with the Senate comprises the Parliament—has 338 members. It’s the Speaker’s job to maintain order in the House, using parliamentary procedure—and an umpire’s touch—to keep members in line during discussions and debates.

“We must elevate the tone in the House and restore decorum. Mutual respect, despite our differences, is essential,” said Regan, who gave his speech in both French and English.


All in the Family

Regan delivers his acceptance speech on December 3rd after being elected Speaker by his House colleagues. Photo credit: Sean Kilpatrick/The Canadian Press via the Associated Press 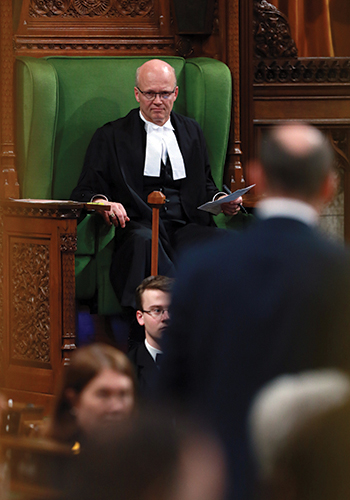 As Speaker of the House, Regan must maintain order during discussions and debates. Photo credit: Canada House of Commons

After graduating from St. Francis Xavier University in Nova Scotia, Regan earned a law degree from Dalhousie University, also in Nova Scotia. One day at a political convention in the province, he was talking with Rod Doiron, a man who knew his father. The man urged Regan to run for office.

“The most important part of my Toastmasters experience, the number one thing I learned, is that working toward a worthwhile goal builds self-esteem.”

By the time he was elected to Parliament, Regan had left Toastmasters, but he says the lessons he learned there continued to pay dividends. He cites a long list of Toastmasters skills that are key to political success: how to craft a persuasive argument, organize your thoughts, use evocative phrasing, evaluate what other people say, and connect with your audience, whether it’s one person or thousands.

Geoff Regan, Canada’s Speaker of the House of Commons, isn’t the only Toastmaster to flourish in the world of politics. A long list of members or former members have made their mark in that arena, whether as lawmakers, speechwriters or diplomats.

Political leaders have included Pat Roberts, a long-serving U.S. senator from Kansas; Linda Lingle, who served two terms as the governor of Hawaii; and Paramasivum Pillay Vyapoory, CL, elected earlier this year as vice president of the Republic of Mauritius, an island nation in the Indian Ocean.

Gary Schmidt, DTM, International President in 2009-2010, served as a top aide to two U.S. senators from his home state of Oregon, Mark Hatfield and Gordon Smith. His responsibilities included writing speeches and speaking at political events like town hall meetings.

Toastmasters have also served as high-ranking diplomats. David Y.L. Lin was Minister of Foreign Affairs for the Republic of China (Taiwan) from 2012 to 2016. Thabo Khasipe served as an ambassador for the Kingdom of Lesotho, a country in southern Africa.

In a 2010 speech to a club in Honolulu, then-governor Lingle said, “I encourage everyone who is even thinking about running for office to join Toastmasters. It will give you a level of confidence that you wouldn’t already have; it will give you a built-in support base among your fellow Toastmasters, and it will enable you to stand up and be effective in front of any audience and communicate ideas that are worthwhile.”

Paul Sterman, is senior editor, executive and editorial content, for Toastmasters International. Reach him at psterman@toastmasters.org.