In his 1926 book, The Story of Philosophy: The Lives and Opinions of the World’s Greatest Philosophers, Will Durant paraphrases Aristotle’s teaching on habits with these words: “We are what we repeatedly do. Excellence is not an act, but a habit.”

Excellent leaders partner their goals with consistent habits. Goal-achieving leaders have character traits like courage and persistence, but their habits pave the way to success. They practice day-to-day routines and behaviors so regularly they almost become automatic. Even mundane habits lay the groundwork for a successful journey and propel you little by little to reach your goals. 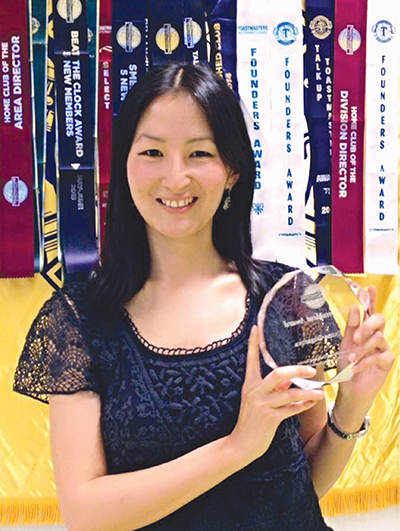 Esuna Dugarova poses with the Club President Award after serving her term with the International Geneva Toastmasters club in Switzerland in 2016.

Esuna Dugarova, ACB, CL, is a past president of the International Geneva Toastmasters club in Switzerland. Originally from the Republic of Buryatia in Russia, she holds a Ph.D. in Asian Studies from Cambridge University and was a research fellow at the United Nations in Geneva studying social dimensions of sustainable development, which is development that meets present needs without compromising future generations. In October, she moved to New York City to take the position of Policy Specialist in sustainable development at the headquarters of the United Nations Development Programme. In her professional role she is a “future-thinker,” so goal setting and vision-casting is part of her job.

She does the same with Toastmasters. As club president, her vision was to change the club’s routines and habits to enhance the members’ experience. She says, “I polled members to find their needs and what changes they’d suggest for the club. From that I identified specific ways to meet those needs. We brought more variety to the club with debate and improvisation. We improved mentoring for speech contestants. I adopted a more personalized approach of ­writing encouraging heartfelt notes so people felt valued.”

Although sometimes exhausted from her regular job, she wanted to provide an inspirational club environment for everyone. “When I was tired, I pushed myself to accomplish things. It’s hard, but always rewarding, because energy creates energy,” she says. “I believe that strong will, hard work and perseverance drive success. It’s not enough to tell yourself, ‘You can do it!’ You need to act. This trains your will to get where you want to be.”

Dugarova models the power of consistent habits, both personally and within her club. When she implemented changes in club routines, or regularly chose to push through exhaustion, the results were clear. Under her leadership, the club grew consistently and became dramatically more positive. She says, “The members clearly enjoyed themselves as evidenced by happy smiles and the lovely ambiance during the meetings.” For her dedication, she received the Club President Award in recognition of Dedicated Service and Outstanding Leadership, a clear indication she met her goals. 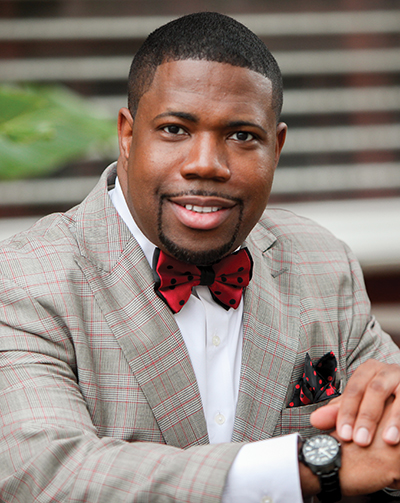 Delatorro McNeal II is a peak performance expert, best-selling author and professional motivational speaker. And he got his start in Toastmasters. In graduate school he originally joined Seminole Toastmasters in Tallahassee, Florida. He says, “I moved to Tampa and joined an extraordinary club, Suncoast Toastmasters.” In 2003, he became a full-time professional speaker and began to travel extensively. “I’m not an active Toastmaster now,” he says, “but every chance I have, in all my interviews, training material and boot camp speaker training events, I promote it. I even require my coaching clients to join.”

In 2013, he wanted to create a reality TV show that featured him coaching emerging speakers to build a speaking business. The vision for The Keynote was born. Unfazed by his lack of TV production experience, he worked to achieve his dream. He secured a cast, crew and a location, then crowd-sourced over 25,000 in funding. He proposed the show to major networks, but after a year of rejections, chose instead to release it directly to the internet in the spring of 2016. The second season is in production. In the show, he features Toastmasters clubs helping contestants improve their communication skills. 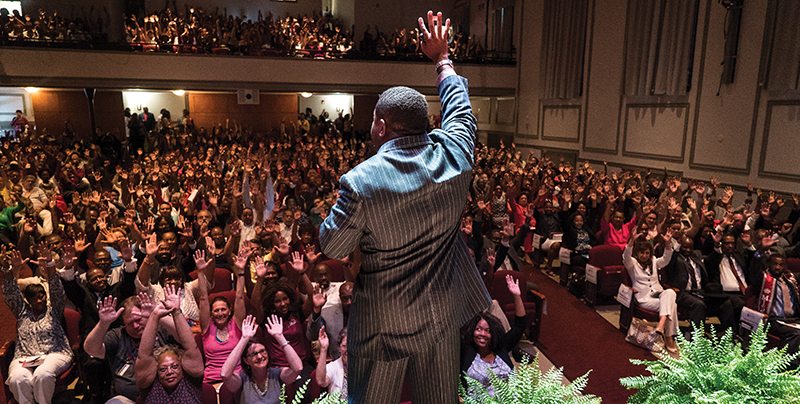 While developing The Keynote, McNeal used the same goal-setting techniques that he teaches in his annual transformational conference “The Full Throttle Experience.” He says, “Massive success needs 3 R’s. First, what’s the Reason you do what you do? I wanted a positive business reality show about public speaking. I wanted to help people push past their top fear because then their other fears don’t have a chance. Second, what’s the Reward at the end? I visualized myself on TV, on DVDs, in the press; I imagined what the fans would say, how the contestants would change. Third is Resources. Maximize what you have, and get what you need. Build your resources … spiritual, financial, human (engage others to help), and emotional (determination, resilience, patience.)”

McNeal relies on consistent habits. He says, “Each night I plan my next day. While I’m sleeping, my subconscious mind works on what my conscious mind has scheduled. When I wake up, I’m ready. Then I immediately verbalize my gratitude because that’s the emotional trump that overcomes negative emotions. You can’t be simultaneously grateful and grumpy. After some cardio exercise, I attack my day with routines like tending to finances, checking on pending contracts and following up with clients.”

Many of us are chronic un-completers. We don’t finish what we start, we abandon habits and give up on our goals. These self-sabotaging patterns block us from the success we long for. Mike Rayburn is an international keynote speaker, a Certified Speaking Professional (CSP), Hall of Fame speaker (CPAE), and two-time TEDx presenter who inspires his audiences to think “What if…?” in order to achieve more than they thought possible. He says, “Success is not what you think. It’s what you do with what you think. Ideas mean nothing without execution. The measure of your success is your ability to complete things.” If your goals are not being met, it’s probably because the habits and behaviors you chose are not working in your favor.

The solution is in setting different habits, ones that are personalized for you, and therefore easier to maintain. Gretchen Rubin is a speaker and writer on the topic of habits and happiness. Her New York Times bestseller, Better than Before: Mastering the Habits of Our Everyday Lives, describes how to develop personalized, customized habits that work for you. She writes in a January 2016 blog: There’s a popular myth about habits that leads people astray. It makes them accuse themselves of being lazy, self-indulgent, and lacking in will-power. It causes them to fail. What is this myth? It’s the myth that there’s a magic, one-size-fits-all solution for habit change. But there’s no one ‘best’ habit. Rather, there is a one-size-fits-all-solution, which is: Follow the habits that work for you, that help make you happier, healthier, and more productive.
So, instead of doing what everyone else does, try to choose habits that are effective for you. This will increase your odds of reaching your goals. Here are some that worked for other Toastmasters.

1. Send personal notes. Ryan Avery, DTM, is the 2012 World Champion of Public Speaking, and a member of the Competitive Speakers PDX club in Portland, Oregon. He makes it a regular habit of writing handwritten letters. “It’s physical proof that you took your most precious resource (time) and thought of that person. Handwritten notes offer a human touch that is missing in most of our communication today.”

2. Document everything. Margy Sneeden, ACS, ALS, of Kloof Toastmasters Business Breakfast club in Durbin, South Africa, knows the connection between documenting her club involvement and reaching goals. Her habit is tracking everything. “A meeting role is for CL credit … every PR or membership campaign is for CL credit. Each member I mentor is CL or ACG credit. These goals are as much for me as they are to help my clubs achieve Distinguished status. My personal goal is to complete my DTM by December 9, 2016. I have just three speeches to go. In addition, since achieving a Triple Crown [achieving three education awards in a single program year] in the 2nd year of my membership, I now set a goal to achieve a Triple Crown every year.”

3. Prioritize well. Chief Ambassador and past District Governor Jan Vecchio, DTM, is a member of seven clubs in New South Wales, Australia. Since her teen years, she’s been focused on setting and meeting goals. As a member, she says, “Each year I plan to achieve an education award for each of my clubs. That’s seven awards each year! In addition, I plan to complete another DTM this year. For the required HPL [High Performance Leadership] project, I am thinking of something that will benefit the community outside Toastmasters.” She finds ways to balance her Toastmasters commitments with other things, such as friends and family, reading, running and going to the opera. “I plan ahead and keep a diary,” she says. “It comes down to time management. I don’t waste time watching television. Time is a precious commodity and I handle it with care.”

4. Create habits related to your goals. Will Durant’s quote, as mentioned in the opening paragraph, is one of Josephine Lee’s favorites. Lee, the third-place winner in the 2016 World Championship of Public Speaking®, says it’s because the idea of benefiting from our daily habits “gives us hope that we may all achieve excellence through what we do every day.” A member of three clubs in Southern California, Lee says of her path in Toastmasters: “I try not to have expectations or tie myself too closely with an outcome that I have no control over. Instead, I focus on what I have control over every day.” She credits her success to daily practice, as well as to her speech coach.

5. Practice your ABC’s: Always Be Curious. Great leaders are intensely curious, and make continual learning a high priority. They ask questions, seek expert advice, read extensively and invest in training. If you have a Toastmasters leadership goal, you would be wise to do the same, especially since the opportunities for learning are plentiful. The Toastmasters Leadership Institute (TLI), for example, is the training program designed for club officers to learn their roles. Leaders from all over your district come together, providing a phenomenal networking environment and a safe forum to ask questions and share ideas. At my first TLI, I learned a creative way to conduct a demonstration meeting. That helped me to charter a new club and earn my DTM. I’ve attended many TLIs and presented at several as well. The learning never stops for the leader.


Leaders know that whether your goals are inside or outside of Toastmasters, the habits you choose will help you reach them. Habits and goals go hand in hand. Durant’s words bear repeating: “We are what we repeatedly do. Excellence is not an act, but a habit.” Choose excellence.