Speaking With a New Purpose Many people come to Toastmasters to become better speakers. But one club is reaching out to people who are adjusting to a new way of speaking. Members of Speaking on Purpose, an online club, which chartered in June 2021, are all adjusting to life with various physical and neurological disorders, from Parkinson’s to multiple sclerosis to recovery from brain injuries and strokes.

The club is already having an impact, providing a powerful sense of community and support for members facing arduous challenges, both physical and emotional.

“By creating an environment with individuals who are experiencing similar issues, members are feeling less intimidated, more empowered through participating and sharing their stories,” says Rick Taylor, former Club Growth Director of District 29, who helped get the club started.

Speaking on Purpose is the brainchild of Jeff Arnette, a Toastmaster since 1999, who was diagnosed in 2020 with Parkinson’s disease (PD), a progressive nervous system disorder that affects movement, including tremors and stiffness, as well as softer and slurred speech.

After his diagnosis, Arnette began speech therapy, and although he gained a lot, some sessions frustrated him. “I could only speak at those classes for a very limited time,” he says. “But I knew Toastmasters could offer a lot more.”

He asked Taylor, “What if we were able to put together a club that helps people like me improve vocal variety?” Taylor had a family member with PD and knew the effects of the disease. With just two months left in his term, he saw the potential and swung into action.

Both men started reaching out to people in the medical community—neurologists, speech and language pathologists, and people in support groups—as well as in Toastmasters to gauge interest.

Experienced Toastmasters were eager to help. Viki Kinsman, DTM, a Past International Director, advised the club leading up to its formation and then served as Club Mentor. Mike Schultz, a former District 27 Governor who suffered a traumatic brain injury, is Vice President Public Relations, and Arnette is the Club President.

They officially chartered only two months after conceiving of the idea.

“I’ve seen what Toastmasters can do,” says Arnette, who helped charter a club back in 1999. “And in this club, although we all have different diagnoses, we all have one thing that’s very similar—families that [unintentionally] start to ignore them.

“Maybe Dad doesn’t talk as well or Mom is having an issue with something. So they drop out of the conversation. We can help minimize the symptoms and help people learn to speak well, speak loudly, speak clearly, and get people’s attention. We can give them a chance to talk more and practice more as a group.”

The club has had to relax a few Toastmasters guidelines. They don’t count many ah’s and um’s, and often reduce time requirements to accommodate some members.

Members aren’t required to speak about their condition or ability. Some feel validated talking about it; others prefer to give speeches on other topics. And while paying attention to the clock is still important, the club tries to balance the importance of telling your story with the need to do so in a reasonable amount of time.

Evaluations take into account members’ differing abilities. “I always see a great sensitivity being given to the speaker regarding their ability—that is, what is in their control and what is outside their control,” notes Taylor.

The club’s online meetings went from being a daunting experience to a great opportunity. Members anywhere can join in and benefit without needing to drive or find someone to drive them to meetings if they’re physically unable to do so.

In the past year, Arnette has noticed a dramatic increase in attendance and participation. Members come from across the country and the club recently participated in its first speech contest. As skills have grown, so has confidence.

Says Taylor: “It’s really a testament to how Toastmasters can change people’s lives for the better.” 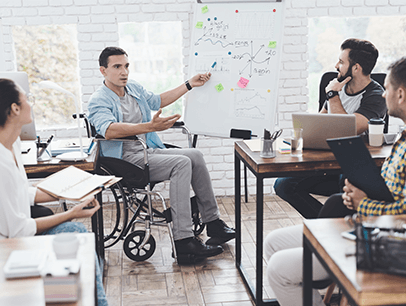 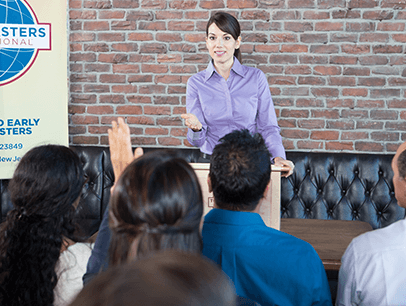 Set the stage for more inclusive meetings—in Toastmasters and beyond.