Learn how feng shui, cattle raising, and a missed opportunity were all part of this Canadian’s path to the presidency.


Click play to hear an exclusive podcast interview with 2021-2022 International President Margaret Page, DTM, and the hosts of The Toastmasters Podcast.


On any given morning, Margaret Page can be found riding her bicycle against the sunny and scenic backdrop of Delta, British Columbia, Canada. Back at home, surrounded by plants aplenty, she’ll practice yoga before her day becomes busy with virtual workshops, calls with clients, and an online Toastmasters meeting.

“I have filled the house with plants—there is life here!” says Page, laughing. “Last fall I had about five … now I have 35. I just have to be surrounded by living things.”

This is a notion that many people around the world can relate to, now having spent more time than ever at home and away from friends and family. The 2021–2022 International President is rarely alone, though. In addition to her daughter and grandchildren living nearby, Page says she has her Toastmasters community by her side, in Canada and beyond. She plans to bring this message of unity to Toastmasters during her term.

“We have been tested the last two years, but now we have this opportunity to move forward more purposefully and build back stronger,” says Page. “We have three different kinds of meeting models now: on-site, online, and hybrid, and there is something for everyone. Geographic borders are no longer relevant—whatever kind of club you want, at any hour of the day, of every day … if you have a need that can be met, we can build it and support members to grow and learn.”

“Build back stronger” is a theme you’ll be hearing from Page, DTM, over the next year, as she draws on perspectives developed during her 18-year membership. Through her monthly Viewpoint column in the Toastmaster magazine, she will motivate clubs to find their sweet spot in membership numbers, encourage individuals to keep track of goals (and thank those who helped them along the way), and give guidance on gaining and retaining members.


A Leader in the Making

As an entrepreneur with more than 30 years of business experience, Page is no stranger to taking on big tasks, leading teams, and making difficult decisions. She and her ex-husband ran successful businesses since the late 1970s throughout the city of Lloydminster, the “oil capital” of Canada. She managed enterprises involving anything from oilfield construction to tire retreading to raising horses and cattle—and then shifted to operating a hair salon franchise in Las Vegas, Nevada.

She currently operates three businesses of her own: Westminster Property Management Ltd.; Etiquette Page Enterprises (providing training and coaching to corporations, executives, and individual clients); and Beyond the Page Coaching Ltd., where she offers one-on-one coaching support for individuals in achieving clarity and confidence.

“There are many things I learned from my own businesses, including finance, delegation, teamwork, and management,” says Page. “What I learned in Toastmasters, though, were the people skills. Leadership is about results and relationships—at one time I thought it was more heavily toward results in the business world … but relationships are so much more significant, especially in a volunteer organization.” 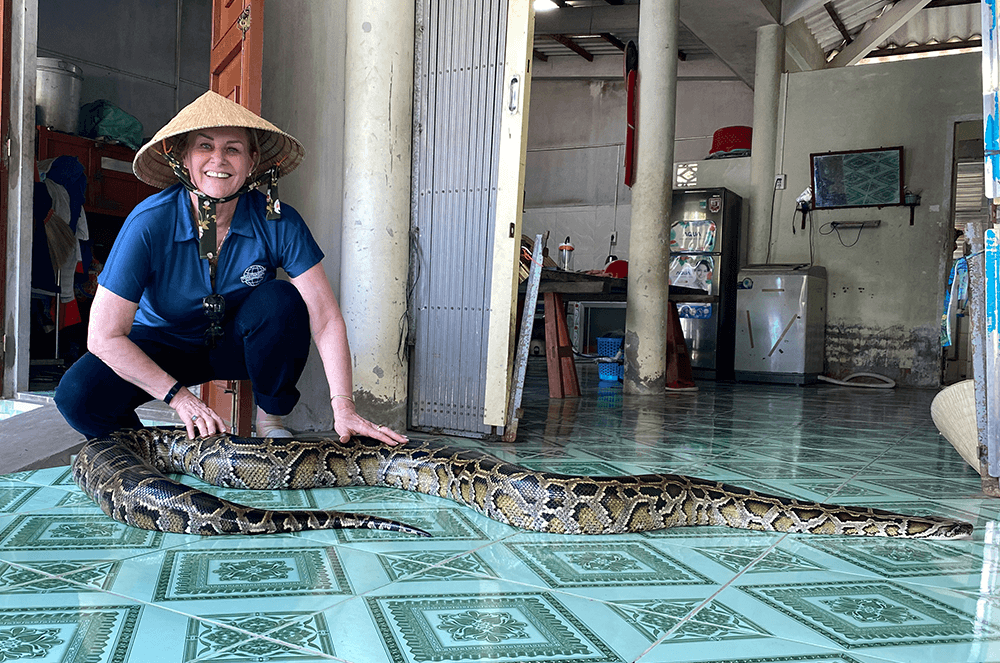 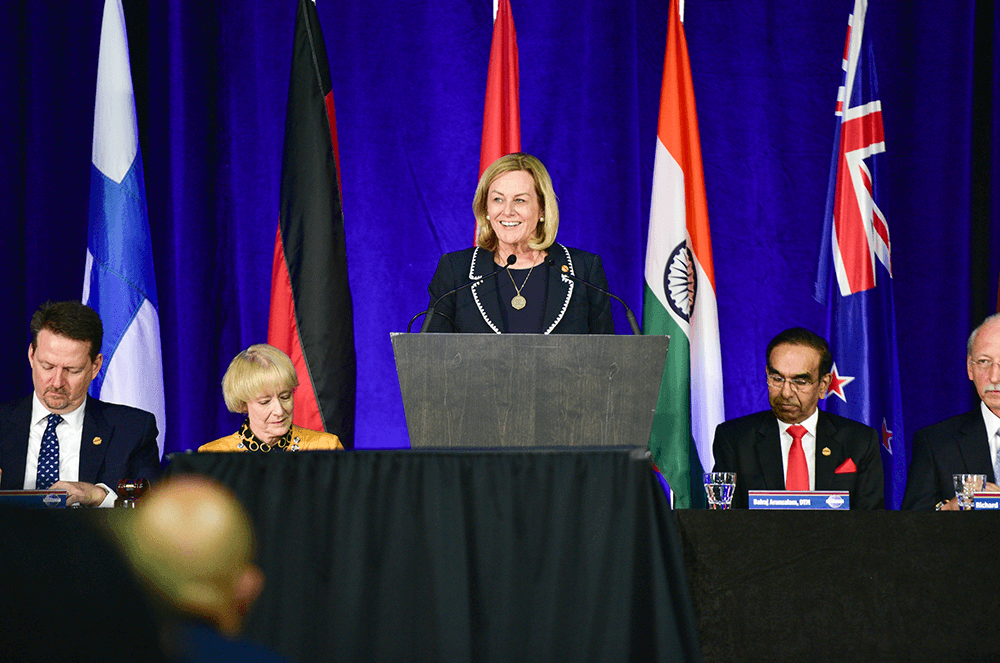 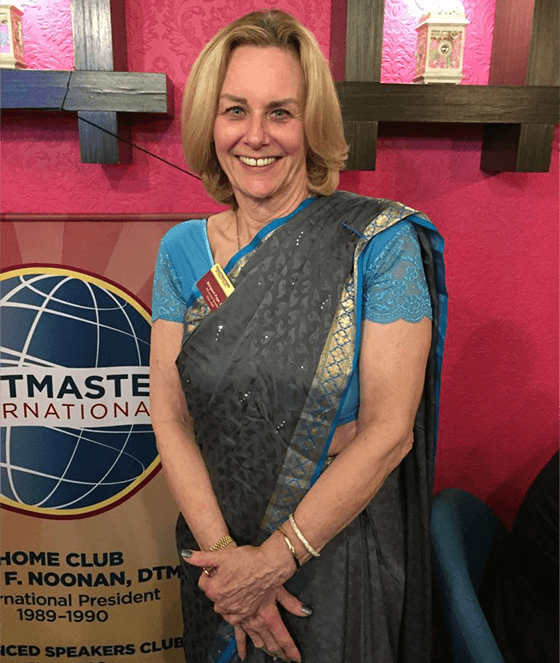 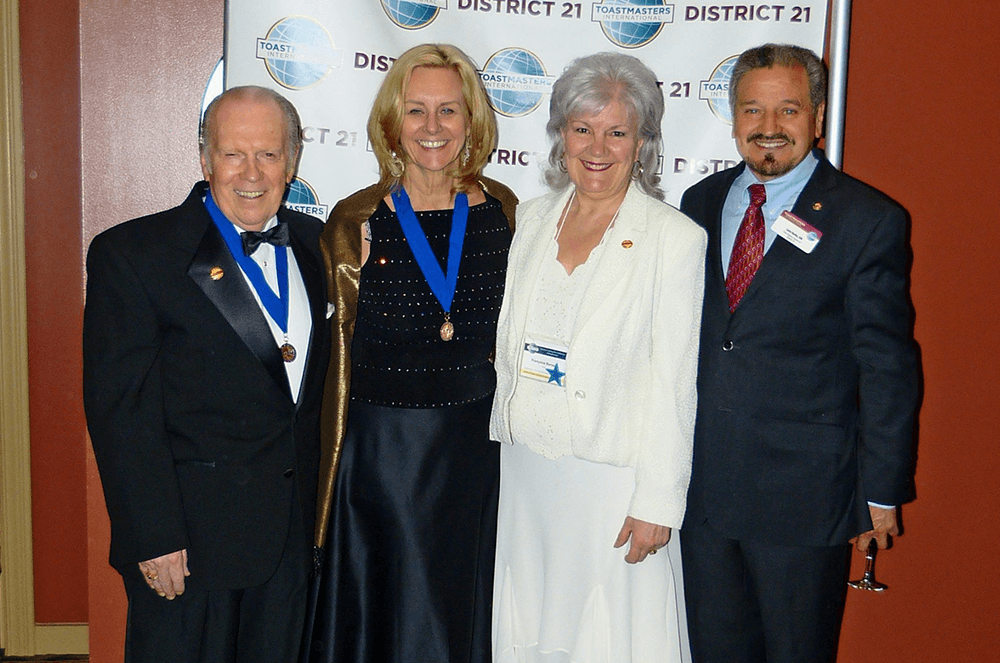 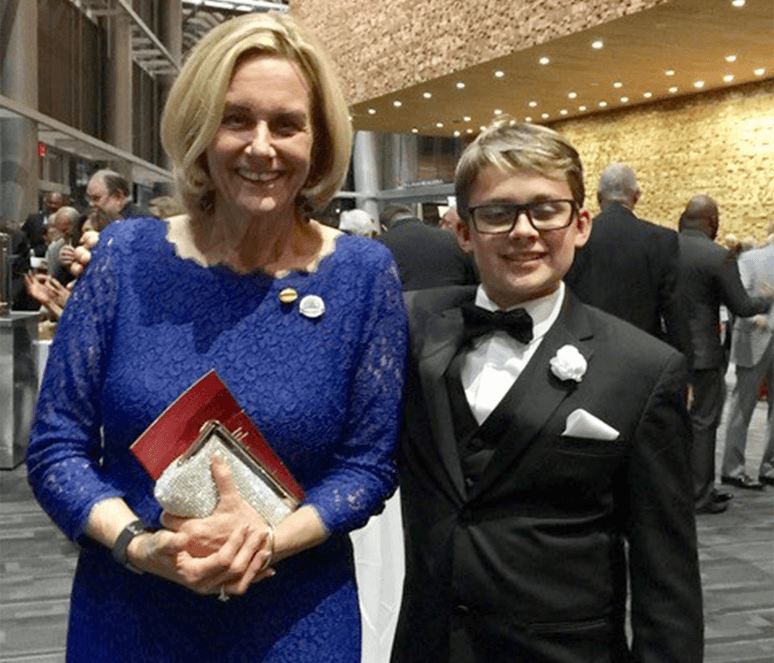 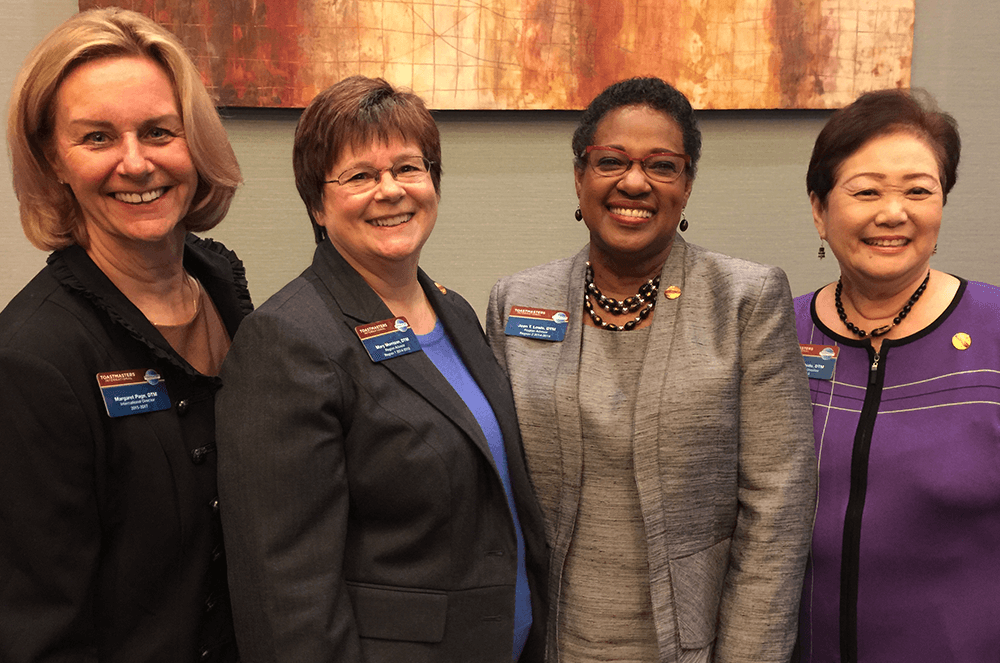 Before she could rise to the challenge of the leadership track in Toastmasters, Page first had to stop avoiding public speaking. Prior to becoming a member in 2003, there was one speech that haunted her, and it wasn’t even a speech she gave. In 2001, Page was living in Las Vegas, running her chain of salons, when she received a call from an association to share her business success story—with 1,700 people. She passed on the opportunity but still attended the convention. While sitting at a table with her managers, she watched as a gentleman from a lesser-ranked company walked to the microphone and shared his business success story.

“There I was with these managers … I looked at them, and they looked at me like ‘what’s going on here?’ That was a pivot point for me—I realized that I had let them down, and I couldn’t share their stories,” says Page. “But then you have a realization that this can’t go on; you need to do something about it. Still, it took a year and a half before I stumbled my way into a Toastmasters meeting.”

Page, who is originally from Calgary (also affectionately known as “Cowtown”), moved to British Columbia in 2003 to live out her late father’s dream of residing there. Having sold the businesses in Las Vegas, she was starting with a clean slate and living somewhere where no one knew her. She recalled how speaking and humor had come naturally to her Dutch father, who immigrated to Canada from the Netherlands. He had found Dale Carnegie training and focused on learning to become a better speaker despite having no formal education. “I still have his Dale Carnegie plaque and ring … he was so proud. That meant something to me; that was important,” says Page.

With her move to British Columbia and her businesses sold, it was time for her to take the leap and join Toastmasters.

“All of a sudden I had this gap of time in my life. There had always been the need to develop public speaking skills, but somehow I always found a way out and to not break that threshold of fear,” she says. “My intention was to stay [in Toastmasters] six months—I thought it was like a university class. If someone told me I’d be there for 18 years, I would have been quite shocked!”

Keep reading to learn more about Page’s journey leading up to her role as Toastmasters International President.


Tell us about your first speaking experiences in Toastmasters.

I had joined in October 2003 but didn’t speak until January. They asked me time and again for Table Topics®, and I would say ‘no, not this week.’ But my New Year’s goal was to speak at Table Topics no matter what; and the very first meeting after the new year I said yes! My question was, “Why is New Year’s on January 1st?” I didn’t have a clue! But I blathered something for 30 or 45 seconds. To me it was such a success. My goal was to just get up there and do it—and I broke through that big threshold.

Then, for my Ice Breaker, I thought I would demonstrate all the hats that I had worn in life, so I had a table with all these props to show driving my kids to school, diapers under my arm, bookkeeping, etc. But I ran out of time and the props were all over and it took a long time to collect everything. I’ll never forget that Ice Breaker!


After becoming more comfortable speaking, was a leadership role your next goal?

Relative to going down the leadership path in Toastmasters, I only saw as far as the headlights.

The door of opportunity would unlock and open—I would peer in and think, yes, I can make a difference here. When the opportunity came for international Second Vice President, I raised my hand and put in my application. After I was nominated, I did a lot of work studying parliamentary procedure, working with an image consultant, and a host of things to prepare for the role. I’m still preparing! When you’re representing many people around the world who are counting on you, you feel obligated to put forward your best. That’s our core value of excellence, right?


What does it mean to you to be Toastmasters’ seventh female International President?

First let me say that I am absolutely proud of Toastmasters and how we, in essence, have been leading the way in nonprofits with women in leadership. Women have been paving the way since 1985 when Helen Blanchard was International President.

Past female International Presidents reached out in support, and have encouraged, nurtured, and guided me along the way. Pat Johnson, DTM, was my mentor when I was District Governor in 2012-2013, then I served with Lark Doley, DTM, on the Board of Directors. Pauline Shirley, DTM, is a longtime supporter of women in leadership roles and she has nudged me on to more passionate thinking, and I adore Jana Barnhill, DTM, AS, who makes everyone feel welcome. I am honored to be following in their footsteps.


How has Toastmasters helped you beyond your career?

There was a period in Toastmasters when so many doors of opportunity opened up to me in my community. I had to come up with some criteria by which I would make a decision on what to do next. So, I came up with three things, and that’s what I measured everything against: 1) It had to align with my values, 2) I had to be learning something new, and 3) I had to make a significant difference. I served on the Community Foundation Board and the Sunshine Coast Economic Development Organization, and I received other requests, such as serving on the hospital board, running for mayor, and council person, all because Toastmasters unlocked those doors of opportunity.

During COVID, I also started doing work for some cities and chambers of commerce, and I started a program called “Lights, Camera, Action,” which is about effective meetings on Zoom. I have done that workshop 25 times, and now I’ve been asked by the hospitality industry to deliver workshops for them. The online experience did come about from Toastmasters, and now that’s a big chunk of my business.


What are some of your interests outside of Toastmasters?

When I lived in Las Vegas, I studied with a feng shui master. I would fly or drive to Los Angeles on the weekends to study with him. I also went on a tour with him and 22 students around China as he did his readings.

I love Sudoku and do it every day—if I don’t solve that then I am frustrated! And I don’t take the easy ones. I did at one time set a record for fastest solving of a puzzle in the diabolical category when the apps came out.

I also study Spanish and Dutch every day for 10 minutes each—just enough to keep improving. I’m trying to join a club in the Netherlands so I can give speeches in Dutch. I’ve spoken in about 30 different countries, and I attempt to do the greeting in their native language when I visit.


Tell us about someone who made an impact on you.

One thing that has been a driver for me for many years happened when I was taking my Area Director training in 2005. The District Governor, Mike Robinson, DTM, at that training said, “We owe it to those who came before us to leave the organization in better shape than we found it, so those that come after us can grow and learn.”

That meant a lot to me, because Anne Kramer, DTM, a past District Governor who lived in North Vancouver, Canada, had gone to extraordinary measures to make a four-hour trip—by ferry and bus—every Monday night to get to a club meeting. Had she not done that for more than a year, there would not have been a club for me to join when I moved to the Sunshine Coast, and that made all the difference in the world.

A New World of Possibilities When it comes to literary material, Page strays from the classic book genres. While her friends often suggest their favorite novels to her, she is particular about what lands on her bookshelf. “I can get goosebumps on my arms from business books,” she admits with a laugh. “Business, investments, psychology, human development … sometimes I read the same thing over again. There’s always a golden nugget, and another tool to put on my toolbelt.”

Here are a few of Margaret’s favorite books: