Chartering on a Small Island

Mauritius has one of the highest club growths per capita. Find out how they do it. The country of Mauritius, a small island in the Indian Ocean off the coast of eastern Africa, has seen incredible club growth recently, with 12 active clubs and five more chartered this year. That’s impressive for an island of just over 1 million people and an area of only 788 square miles (1,268 square kilometers).

Ravin Lama, a Toastmaster of nearly 30 years, has been instrumental in Mauritius’ club growth. After joining Toastmasters in 1992 in Nepal, chartering clubs and holding leadership positions, he saw the growth in that country take off. He moved to Mauritius in 2006 and joined Port Louis Toastmasters Club, and in 2017, he began trying to help Mauritius see the kind of growth he had seen possible in Nepal. Below, Lama reflects on that evolution.

Click play to hear an exclusive podcast interview with Ravin Lama and the hosts of The Toastmasters Podcast.


How did clubs in Mauritius grow so quickly?

We’ve been working to expand and grow clubs for a while. The process started in 2011 when Bob Ward, DTM, a member of Mauritius Financial Toastmasters Club, began talking to District 74 leaders about Mauritius joining the District. He did so again in 2017, but we were turned down both times based on the number of clubs we had. That’s when we decided to really challenge ourselves to grow the number of clubs in our country, something that is particularly hard to do when you’re a small island.

Since I was in the newspaper business, I knew a lot of people in various corporations. I reached out to people I knew at the top and said, “Here is one of the best training programs in the world. You’re not going to find another program like this at this cost.”

Most members in Mauritius are young professionals, 20- to 35-year-olds. There are a lot of banks, financial institutions, and tourism industries in Mauritius so there’s no difficulty in finding members. We go to these companies and tell employees, “It’s absolutely essential for your career growth.” We have corporate clubs in a variety of major organizations. Accenture (Mauritius) has just chartered its second corporate club. We also chartered the Mauritius Revenue Authority Toastmasters Club and are working toward opening a second club there.

We also realized that most of the Toastmasters clubs were in the central region of the country, and we knew we needed to expand. So right now we’re looking at universities and the police. With them you could open one club in the north, south, east, and west, and start to get Toastmasters in these areas.


What is your “recipe” for success?

I have always believed that if you want something in life, you ask for it. The way I see it, you need someone with connections, and then a backup team.

I meet with the higher-ups, explain Toastmasters, and get them interested. Then the backup team does a demo meeting and has all the sign-up information right there at the end of the meeting. As soon as I had one type of business signed up, I’d move on to similar businesses. So I would sign up one bank, then go to another bank and tell them about the first bank. It created a sense of competition.

It’s been easier to open a club since we came up with this plan. Since part of the Distinguished Toastmaster project is sponsoring or chartering a club, I encourage using the demo meeting as a project.


What role do the current clubs play in growing other clubs?

We’ve created a fun sense of professional competition. We hold an annual conference that includes a friendly rivalry over who has the best speakers. But it’s more than just a rivalry. Because of COVID, everyone has joined a common platform. The world has opened up.

When Toastmasters finally gave us the okay to join District 74, all the Club Presidents got together to see how to work together. We’re really excited because being in a District allows us to have access to training, like Club Officer Training; it allows us to compete in speech contests alongside people in other countries; and it allows us to offer more leadership possibilities after Club President.

Once you join Toastmasters you have an instant sense of camaraderie. And it’s not only within your own club, your own country, or your own District—there’s also a fantastic network around the world.


Discover how Toastmasters and Rotary International members came together with a common desire and held a historic joint hybrid meeting in this May 2021 Toastmaster article. 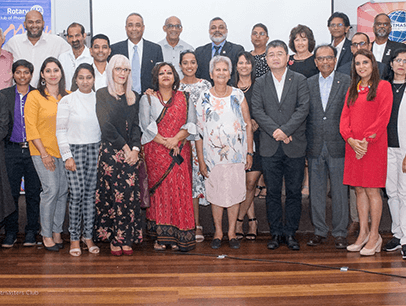 Toastmasters and Rotary members came together with a common desire for the Republic of Mauritius.