Funny You Should Say That
October 2020 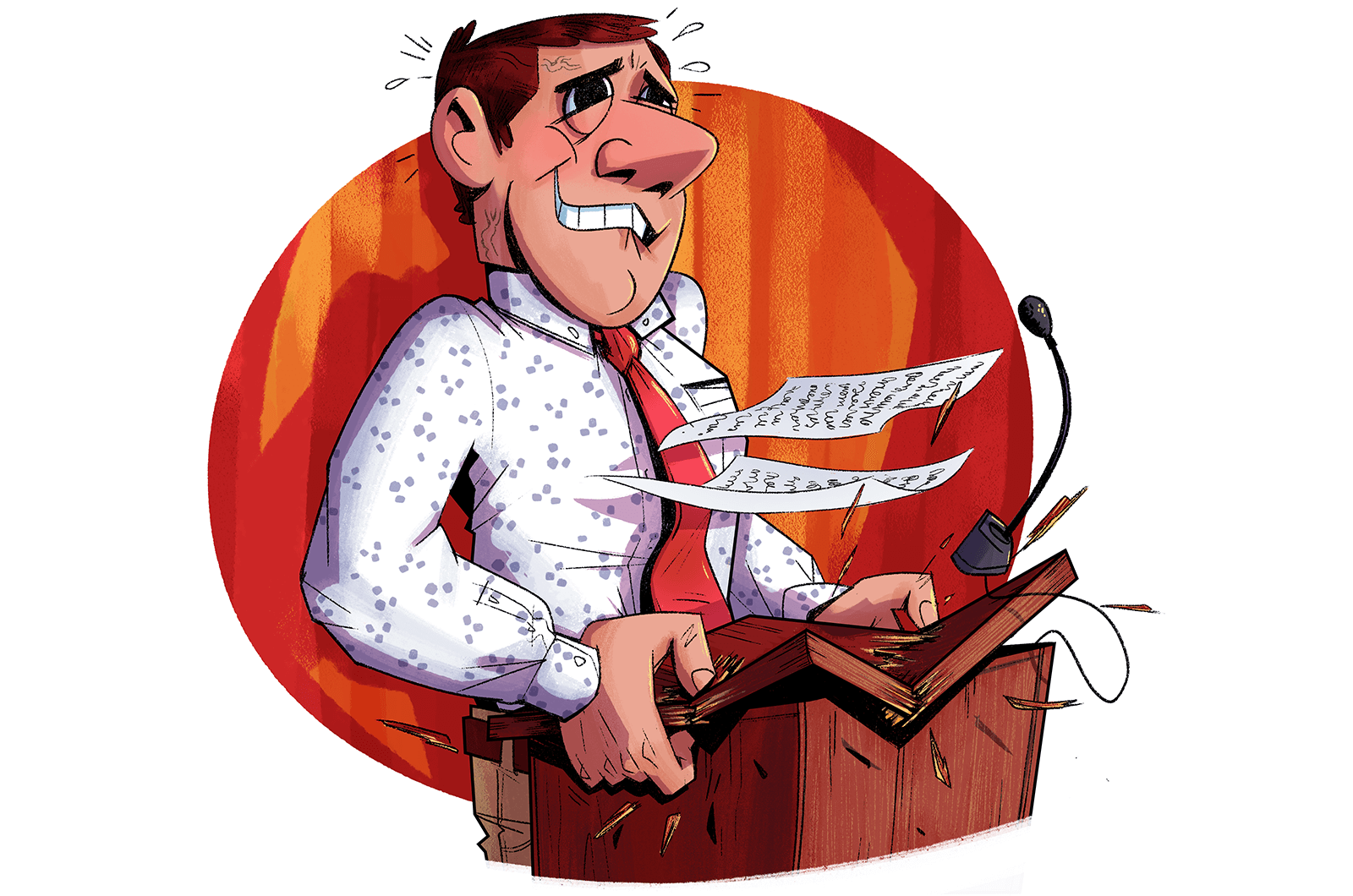 You’re going to nail this. You’ve organized your speech into a concise, logical flow, opening with a spell-binding anecdote that will grab your audience by the throat. You’ve meticulously chosen every word for maximum effect, crafted every sentence to sing like music, and come up with a wham-bang closer that will have them throwing roses on the stage and shouting, Encore! Encore!

Now think—have you forgotten anything that could possibly derail your coronation as a Distinguished Toastmaster? Ah! Body language. Better take a quick look at that. Not critical but victory is in the details. So you consult the research of a pioneering expert on nonverbal communication, Professor Albert Mehrabian … and drop to your knees in despair. What? No! Impossible! Professor Mehrabian’s research tells you that a mere 7% of human communication is verbal while 93% is nonverbal. This can’t be true. You consult other sources and they all cite the same famously controversial Mehrabian 7-38-55 Rule: 55% of communication is visual, 38% is tone of voice, and 7% is verbal. Now what are you going to do—cut your speech by 93% and pantomime the rest? You’re ruined, destroyed. You’ll be lucky if you can get a job announcing baseball games—Batting in fourth position, number 23 ... Oh, the horror, the shame, the humanity!

Professor Mehrabian’s findings may have wide currency but, like your mother telling you not to cross your eyes or they’ll get stuck that way, it’s just not true. By Professor Mehrabian’s own admission, his study involved only a small sample of individual words and did not consider context or how people converse in normal life as opposed to a communication experiment. This is not to say body language is trivial. It is critical. But being a writer, I must give words their due before moving on. Lincoln’s Gettysburg Address, for instance, is remembered strictly for its words. Nobody remembers if Abe was playing with his beard or looking at his pocket watch. Winston Churchill gave his inspiring “We will fight them on the beaches” speech via radio, so nobody saw him either. Considering the man walked around with a perpetual scowl, it’s probably just as well, but that would not have diminished the impact of his words. I mean, England did end up in the winner’s circle.

“It’s what we humans have a desperate need to do—make order out of chaos.”

Now that that’s off my chest, we can move to the nonverbal. When an anthropologist like Ray Birdwhistell reveals that humans have a repertoire of some 250,000 facial expressions alone, we know that body language isn’t just some guy flicking lint off his pants. Why else would the class of people who live or die by how sincere and honest they appear—i.e., politicians—hire personal body language consultants? Now remember, Senator, when you call a Town Hall meeting to hear your constituents’ concerns, try not wave your hand for them to speed it up.

So let’s get back to that speech of yours. What should you do and not do? Don’t fidget. It makes you look nervous. Instead, grip the sides of the lectern tightly enough to rupture the tendons in your forearms, thus rendering you physically incapable of any awkward hand motions. Don’t assume a defensive pose, like crossing your arms over your chest. It looks like you’re hiding something. You should only do this if you are, in fact, hiding something. Do not make aggressive eye contact. You know the type: They fix you with a stare that burns holes in your forehead. Remember, your audience has come to hear you speak, not to be vaporized with the Xenomorph Death Ray.

Don’t slouch. It makes you look depressed and when you get to the Q&A, people will be giving you the names of their therapists. Instead, stand up straight and throw your shoulders back like a drill sergeant, creating the impression that your audience can either pay attention or crawl through mud under a barbed wire obstacle course. Don’t shuffle when you walk onstage. It makes you look weak, and, according to a British Broadcasting Corporation report, more likely to get mugged. Admittedly, your chances of being mugged during a TED Talk are low—unless they really, really hate your speech.

Given all this, you know what to do: Stride confidently to the podium, look at your audience firmly but warmly, stand up straight, and when you shred the tendons in your forearms gripping the lectern, smile. It shows character.