Funny You Should Say That
March 2020

Signs of the Times

I hesitate to write this column for fear of the effect it may have on my readers. Toastmasters prize, in both the written and the spoken word, clarity, precision, brevity, and eloquence. I have no doubt that when they see someone violate those qualities it sends a shudder up their spines, as it does mine. And yet I feel it is my duty to call out some of the most egregious examples of lacerated verbiage I have come across so that you, the guardians of effective communication, can see what you’re up against and remain ever vigilant in your dedication to The Cause. Hence, I apologize ahead of time for any uncomfortable tingling you may feel in your vertebrae but remember—it only shows that you would never commit such a gaffe.

I cite first a sign written on the side of a van, which read: Antiquing the Way It Was Before the Web. What does that mean? “Antiquing,” as I understand it, means going into an antique store to look for antiques, which people still do, web or no web. I can only guess that “antiquing” implies old and “web” evokes new, and the author feels the two are somehow incompatible. I can see where browsing inventories on a high-tech computer might not be as much fun as poking around in quaint, musty shops, and I might even agree … were it not for the line appearing directly under Antiquing the Way It Was Before the Web, which was—ironically—a web address.

Next up is the theme line for an American insurance company, Excellus BlueCross BlueShield, which states: Live Fearless. Never mind that, grammatically, it should be Live Fearlessly. The point is that this is an insurance company that has to pay large sums of money to people who get injured … and they’re telling us to ignore the one instinct—fear!—which stops humans from doing the things that could get them injured! If that doesn’t rattle your linguistic lumbar, I don’t know what would.

We can now move on to Great Britain where we find a park sign that is not so great: Please Do Not Empty Your Dog Here. Words fail me, as they apparently did the author of the sign. It is, of course, the dog that does the emptying and I’ve never seen one that needed any help whatsoever in that regard, especially on my lawn.

I apologize ahead of time for any uncomfortable tingling you may feel in your vertebrae but remember—it only shows that you would never commit such a gaffe.

Living only a few hours from Canada, I visit that wonderful country often. I love the people. They’re just so darn nice. Where else would you see a woman holding a sign at a protest rally that says I’m Generally Displeased With the Current State of Affairs? That, my friends, is the definition of civilized public discourse.

Back in the United States, I took a road trip recently and came upon a highway sign outside a restaurant that was meant to entice drivers to stop in for a bite by informing them that the estab-lishment was air-conditioned and the featured entrée was meat loaf. The sign, unfortunately, was rather small, without enough room for even a little punctuation. Hence, what prospective customers actually saw was Air-Conditioned Meat Loaf. I prefer mine hot, so I’ll see if there’s something a little farther down the road.

I am also forever irritated by the road signs telling drivers to Stay Alert in Work Zone. Just the work zone? Great! As soon as I drive out of it, I’ll go back to reading the paper.

And finally, there are the signs written in a foreign language that lose something in translation. Unlike my other examples, this is not a criticism. I’m sure I would misspeak just as easily in other languages. But one can’t resist mentioning the sign in a Norwegian pub that, when translated into English, comes out as Ladies Are Requested Not to Have Children in the Bar. In the back of a taxi, yes, but please, not the bar. There’s a dart game going on. 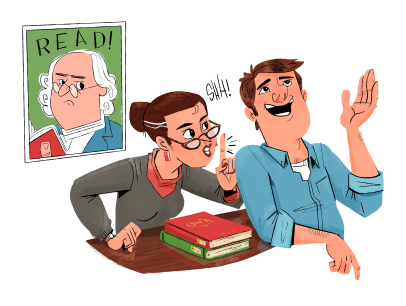