While recovering from an injury in 2015, Deutsche Bank (DB) employee Mahi Sall studied books and podcasts on personal development and entrepreneurship. “I realized that excellent communication skills drive success in life and business,” he says. Determined to improve his skills, Sall joined Mercury Toastmasters, a club in Berlin, Germany, where he advanced rapidly.

But as an employee of a leading financial institution, he yearned to join a club that focused on the specific culture and competencies essential for financial sector employees. Sall, the senior analyst at the Chief Digital Office of Deutsche Bank AG, dreamed of a Toastmasters club that could help his coworkers build their skills while he achieved his personal leadership goals. He was excited to learn that his employer hosted an award-winning network of Toastmasters clubs in the United Kingdom. But there was a challenge: Deutsche Bank had no corporate clubs in Berlin.

An immigrant from Guinea, West Africa, Sall set out to charter the first Deutsche Bank club in Germany. After assembling a team from diverse backgrounds, he contacted Joerg Eigendorf, sponsor of Deutsche Bank’s network of Toastmasters clubs globally. Serving as the bank’s global head of communications and corporate social responsibility, he is based at the bank’s headquarters in Frankfurt, Germany.

“It’s all about putting yourself out there, becoming uncomfortable and just honing those skills.”

Eigendorf responded enthusiastically. “The in-house Toastmasters clubs support our colleagues all over the world to gain confidence and improve their communication skills,” Eigendorf says. “As our employees are our ambassadors, this is essential to building and maintaining our bank’s reputation and brand.”

In 2018, Toastmasters Chief Executive Officer Daniel Rex presented a Corporate Recognition Award to executives at Deutsche Bank’s London offices. The award is given to companies that sponsor a club for more than two years, provide meeting locations, or pay membership dues to encourage employees to join.

As part of the startup process, Sall and fellow employees held a demonstration meeting to attract more people to join. The results were exhilarating. “I was blown away to see my line manager show up at the meeting, sit down, listen, and take notes,” said Sall. “Later, the manager wrote me a ‘well-done’ note and added that I should not hesitate to ask if I needed anything.”

Now Sall serves as Immediate Past President of the first Deutsche Bank Toastmasters club in Germany. DB Toastmasters-Berlin chartered on January 2, 2019. Sall’s efforts paid off, and the Toastmasters training helped him thrive at work. “Getting accepted into a selective talent development program at DB, Germany, was due, in part, to the skills I acquired in Toastmasters that I put to use in my daily interactions at work,” he says.

“I have become more visible within the organization and my confidence has soared.”

An increasing number of studies show that skills in leadership and communication are highly valued by employers. You could be the best in the world at any job, from accountant to zoologist, but if you lack confidence or skills to lead others toward your vision, your career could suffer. LinkedIn’s 2020 Emerging Jobs Report notes that soft skills will increase in value as automation becomes more widespread. Machines and technology can’t compete with the powerful blend of people skills developed in Toastmasters. The report states, “Skills like communication, creativity, and collaboration are all virtually impossible to automate, which means if you have these skills, you’ll be even more valuable to organizations in the future.”

Most companies are already searching for people who’ve developed their soft skills … and their confidence.

A Professional Community of Practice

Elizabeth Carter, DTM, Ph.D., is a member of four Toastmasters clubs, serving as the President of ProMasters club, in Cranberry Township, Pennsylvania. The Immediate Past District Director for District 18 credits Toastmasters with providing a supportive community that helped her build the skills and confidence necessary for a successful career. In fact, she was so intrigued by Toastmasters that she chose to focus on the organization for her doctoral dissertation. To her knowledge, no one has previously published this level of scientific assessments of Toastmasters’ effectiveness for workers who want to advance in their careers.

Carter earned her doctorate in philosophy from Capella University in Minneapolis, Minnesota, in 2018. Her dissertation examined how Toastmasters activities conform to a concept developed by educational theorist Etienne Wenger about the benefits of joining a “community of practice” to expand skills and expertise, enhance professional reputation, gain a sense of professional identity, and increase employability.

She also determined that earlier research on Wenger’s idea had focused more on the benefits to employers, such as improved profits and sales. “The research about ‘communities of practice’ did not have a lot of details about what the members described as value from participating,” Carter says. So she addressed the results in relation to employees.

“A tenured employee needs to be confident to communicate upward to a supervisor, which may include the need to influence (such as asking for a raise).”

A Toastmaster since 2011, Carter found her longtime Toastmasters involvement helpful in setting up and finding participants for her study. She was able to ask perceptive questions based on her own experiences and rely on fellow members for insightful answers regarding their experiences.

It helped that Carter had ample background in the business world: She has been the director of financial operations at 21st Century as well as Farmers Insurance companies. She is currently based in Pennsylvania as the director of finance at Highmark, Inc. in Pittsburgh and the chief executive officer of AAPPEAL in Cranberry Township, which provides solutions to improve organizational and employee performance. 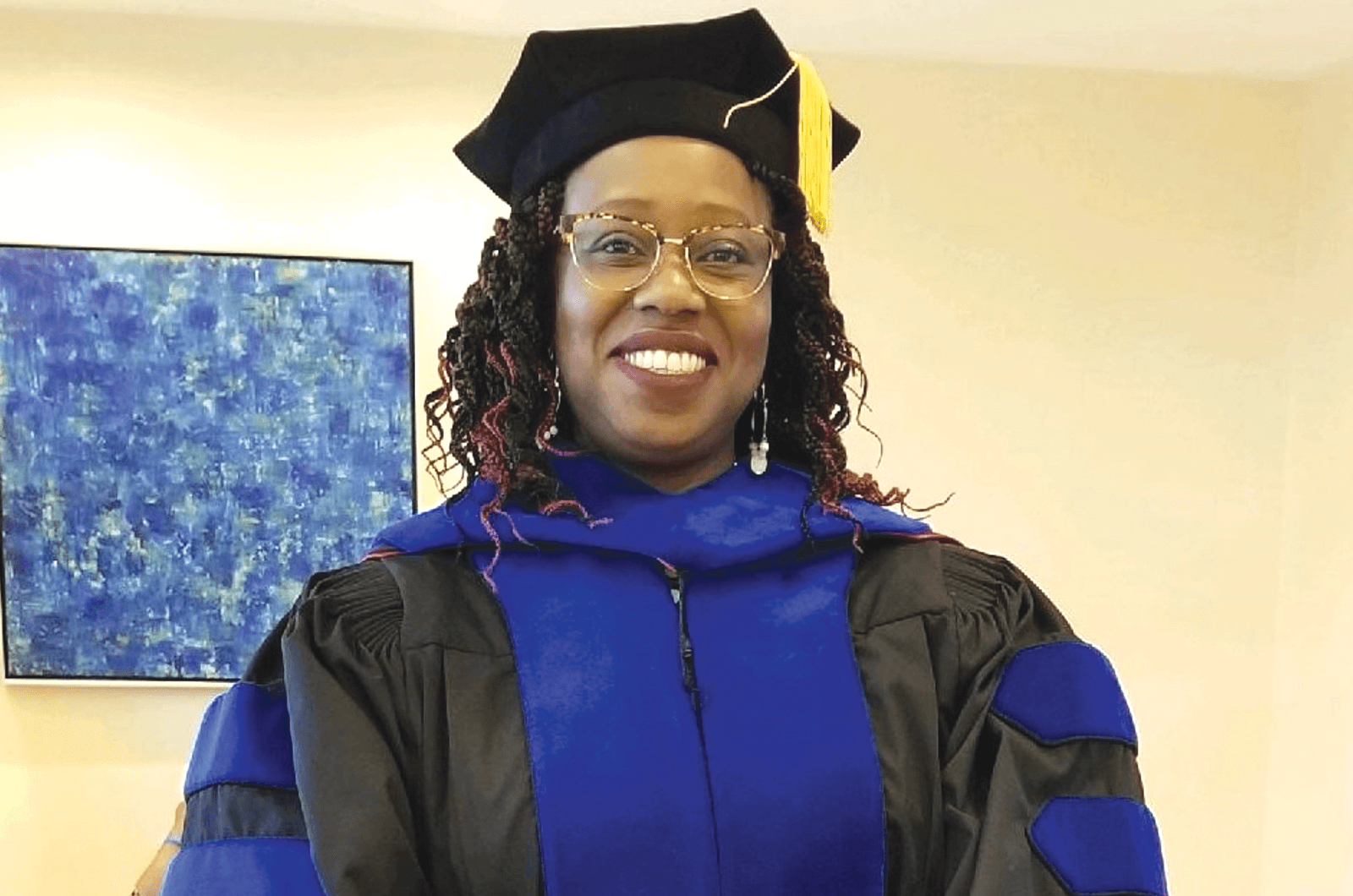 Carter’s study found that Toastmasters develop an intangible sense of confidence that’s valuable at work, in particular benefiting from practical skill-building experiences and supportive evaluations in an engaging community.

Ted Finlay, director of external manager research at Fifth Third Bank, in Cincinnati, Ohio, makes investments for a living, and credits Toastmasters with being one of the best he has made. “The return on investment for that 90 a year is economical, because it has done so much to help my career,” he notes in an article published in CityWire in 2018. He is an advocate for Toastmasters in the workplace and seeks that sense of confidence in any potential investment managers he hires for his company.

Dr. Carter agrees with Finlay that confidence is important at any level in a company’s culture. “A person who is junior in his or her career needs confidence to effectively communicate ideas during an interview,” Carter explains. “A tenured employee needs to be confident to communicate upward to a supervisor, which may include the need to influence (such as asking for a raise).” At the top, a senior-level employee needs absolute confidence to communicate good or bad news to shareholders, board members, and all employees.” At every level in the company, confidence is key, she says, using her personal experience and doctoral research as evidence. 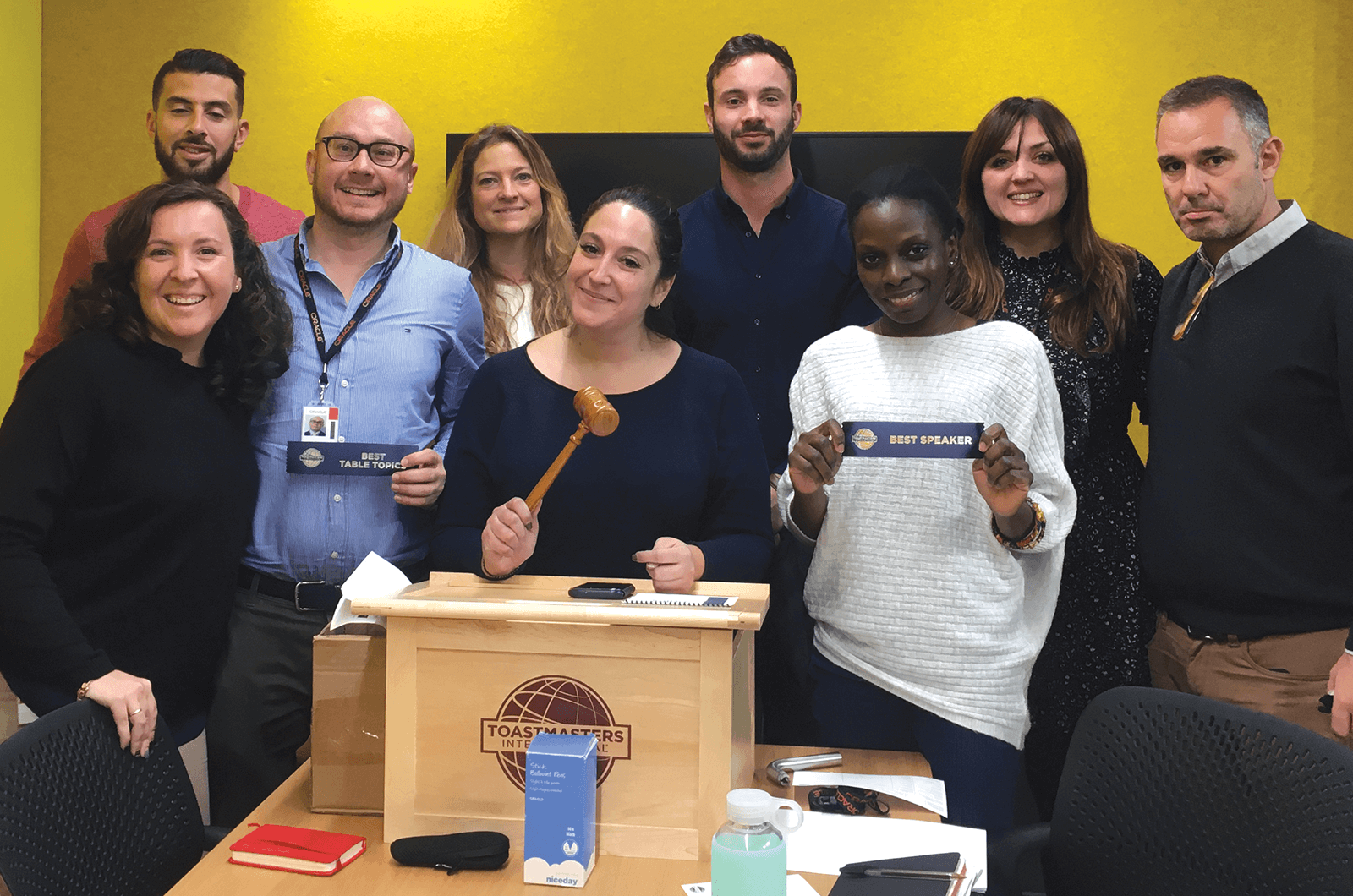 Members of Oracle Málaga Toastmasters club in Málaga, Spain, present the value of Toastmasters membership in a demonstration meeting to 120 employees from many different companies in Oracle’s business park.

Camaraderie in corporate clubs also builds job knowledge. As the LinkedIn report shows, soft skills are critical for the ability to collaborate with colleagues and develop relationships across silos in order to complete projects. Terry Black is a technical writer at Panasonic Avionics in Lake Forest, California, who has made many friends in his company club, the Flying Toasters. Technical writers can understand and write about technology. But these hard skills are only part of the job. “Our company Toastmasters group helps me make personal connections in a professional setting and to communicate clearly about complex concepts,” he says.

Carter also says her doctoral research confirmed what most Toastmasters already know: that evaluations in the club are particularly beneficial in how they guide speakers toward successful presentations later, at work, when career advancement is on the line.

As a technology sales representative at Oracle Digital in Málaga, Spain, Antonio Sanicola knows the value of effective communication. But his membership in the company’s corporate Toastmasters club, Oracle Málaga, has given him the opportunity to gain additional leadership skills. “Now that I am the Club President, I like to remind my team that they don’t work for me, I work for them,” he quips.

Previously, while serving as the club’s Vice President Public Relations (VPPR), Sanicola organized the first “Toastmasters Summit” held by Oracle Digital in Andalusia. His club provided a demonstration meeting for 120 employees from more than 600 neighboring companies in Oracle’s business park. Sanicola had barely met any of the guests beforehand. “At Toastmasters you learn from people,” he says of the experience. His confidence was fueled by paying attention when people spoke about their needs and their desire to grow. “I can better see other peoples’ potential now that I had the chance to lead activities, thanks to Toastmasters.”

Oracle Málaga is one of 33 Toastmasters clubs Oracle hosts around the globe. This company supports the club by offering free meeting space and paying part of the annual membership fee for employees. Like Deutsche Bank, Oracle has earned a Corporate Recognition Award from Toastmasters International. The company encourages participation in the club, which builds specific skills members find beneficial in Oracle’s corporate culture.

Sanicola’s coworker, Chabname Shahrjerdy, senior CX account manager, joined the Oracle Málaga club a year ago and took over the VPPR role after a few months. “The club really helps me improve my leadership skills…” she says. “To my mind, Toastmasters offers a complete way of learning, practicing, and improving our skills for teamwork, which is helpful in our careers.” Shahrjerdy wants to share the expertise she’s gained by mentoring fellow club members and other coworkers at the office.

When workers participate in a corporate Toastmasters club, they see it as a message from executives that they have value. They gain opportunities to master competencies essential to career growth. They benefit from convenient onsite club meetings where camaraderie grows between members of various departments. With Toastmasters in-house, and recognition of club member achievements, any company can empower its workforce with the communication and leadership skills so in demand in today’s marketplace.


Editor’s Note: For more information on starting a club at your place of employment, visit the Toastmasters website, or email newclubs@toastmasters.org. 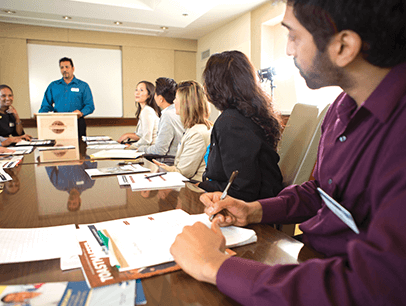 Tips on tackling problems and optimizing opportunities in a company setting.