Bringing the Toastmasters spirit to a remote part of the world.

Ranking high among my passions are traveling the world, running, and Toastmasters. In March 2019, I had an incredible opportunity to travel by ship to a pristine and beautiful place, Antarctica, “the last continent.” I was traveling there with 100 other runners to complete a personal milestone of running at least one full marathon across all seven continents to join an exclusive group of athletes who have achieved that goal.

My other mission: bringing the Toastmasters spirit and experience to my shipmates.

I live in San Jose, California, and any time I visit a new city, country, or continent for that matter, part of my Toastmasters mission is to try to visit clubs. Over the last six years, I have visited 25 clubs across five continents. When I traveled to Buenos Aires, Argentina, to prepare for a marathon, I visited the BA Tango Toastmasters club in that city.

I had hoped to visit a club in Antarctica as well. However, a search on the Toastmasters website came up empty, as it did when I spoke to members and district leaders and feverishly searched the internet. Then it hit me: If there was no club on the continent, why not show people traveling there what our meetings were all about? After all, with 100 of us on a ship together for 14 days, what better way to spend some time than sharing our stories at a Toastmasters-inspired meeting.

Before we left, I decided I would host my own demonstration meeting on the ship to promote Toastmasters and encourage speech-giving. I designed the banner and put together an agenda. 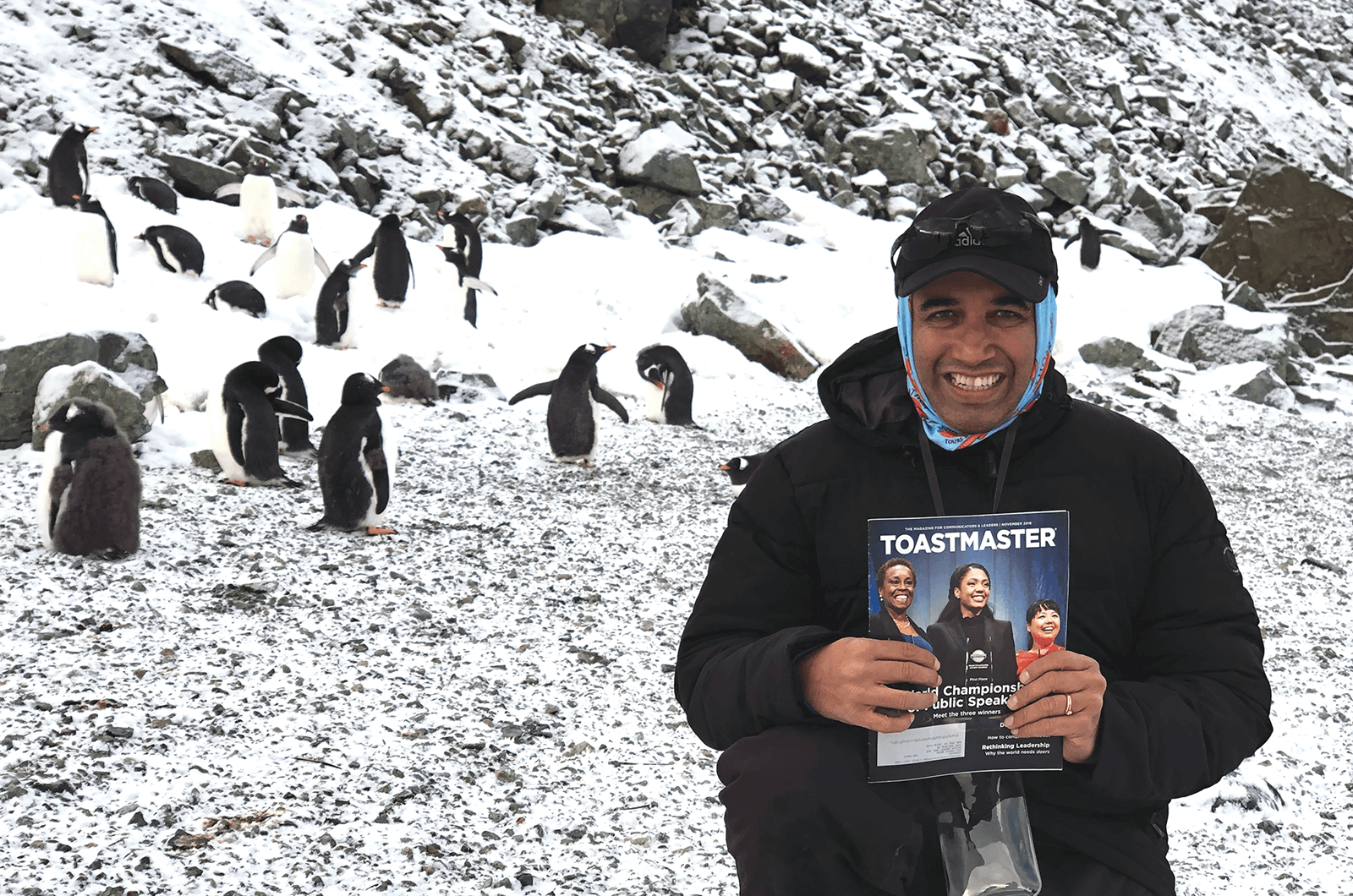 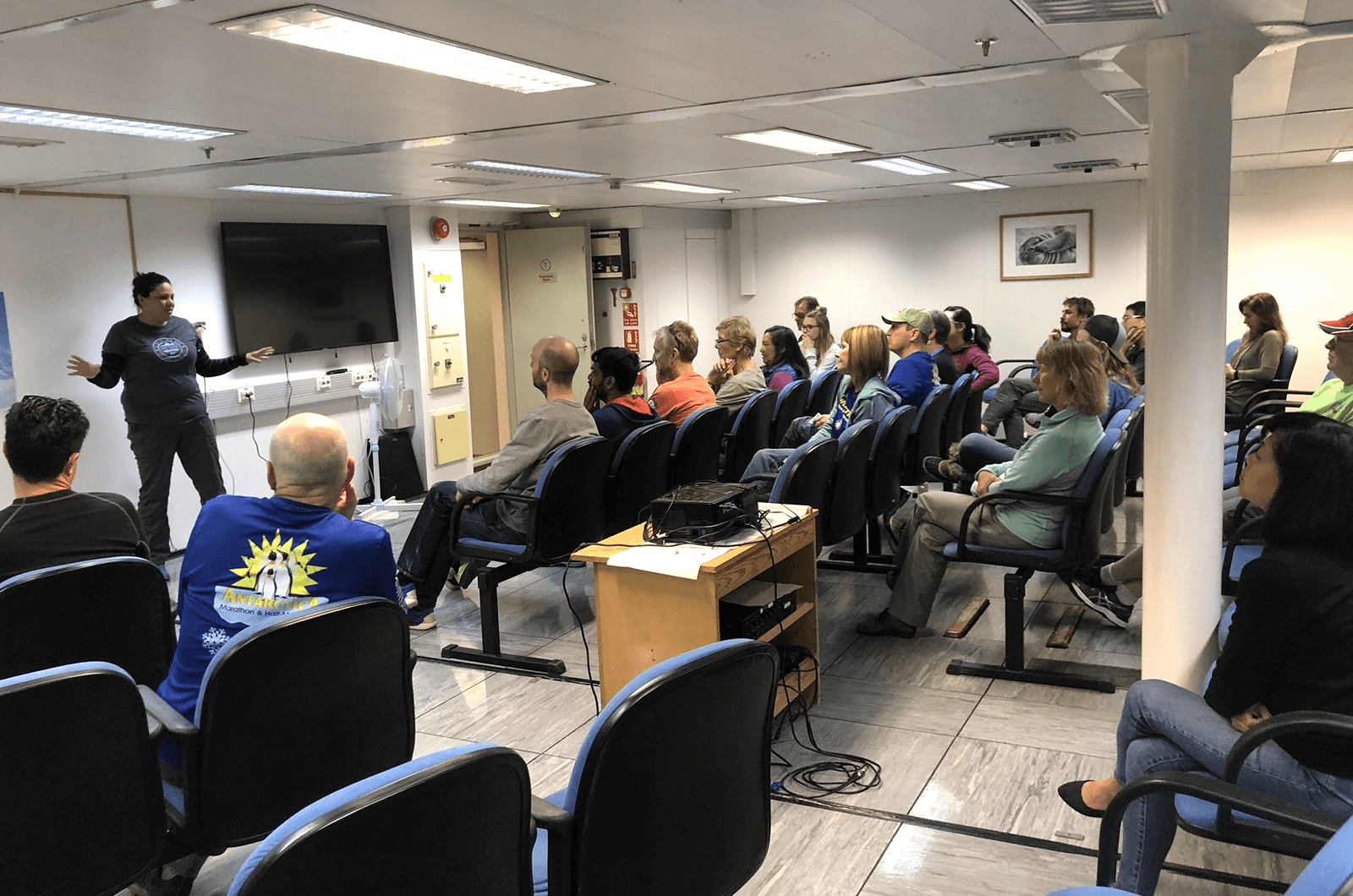 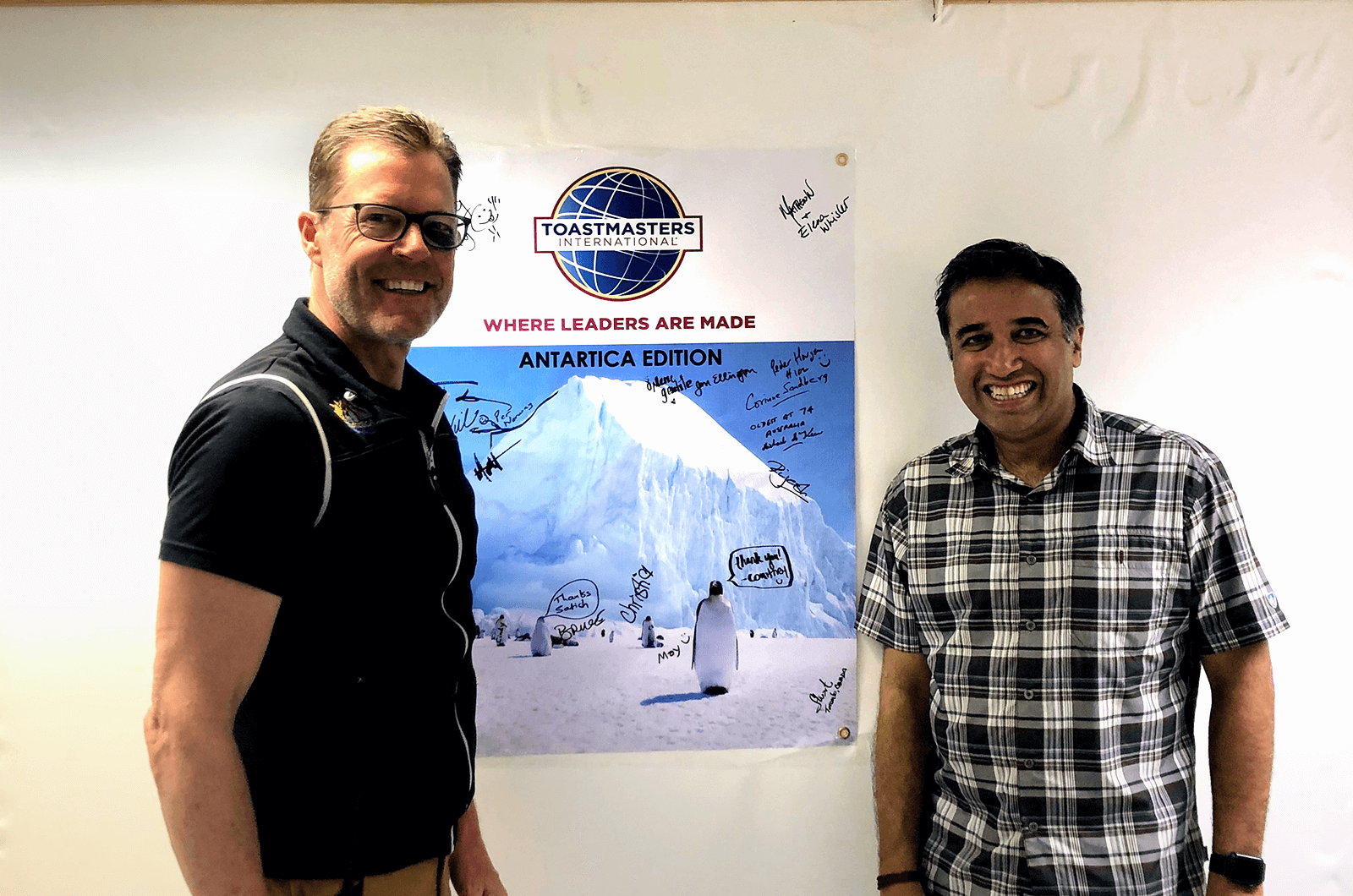 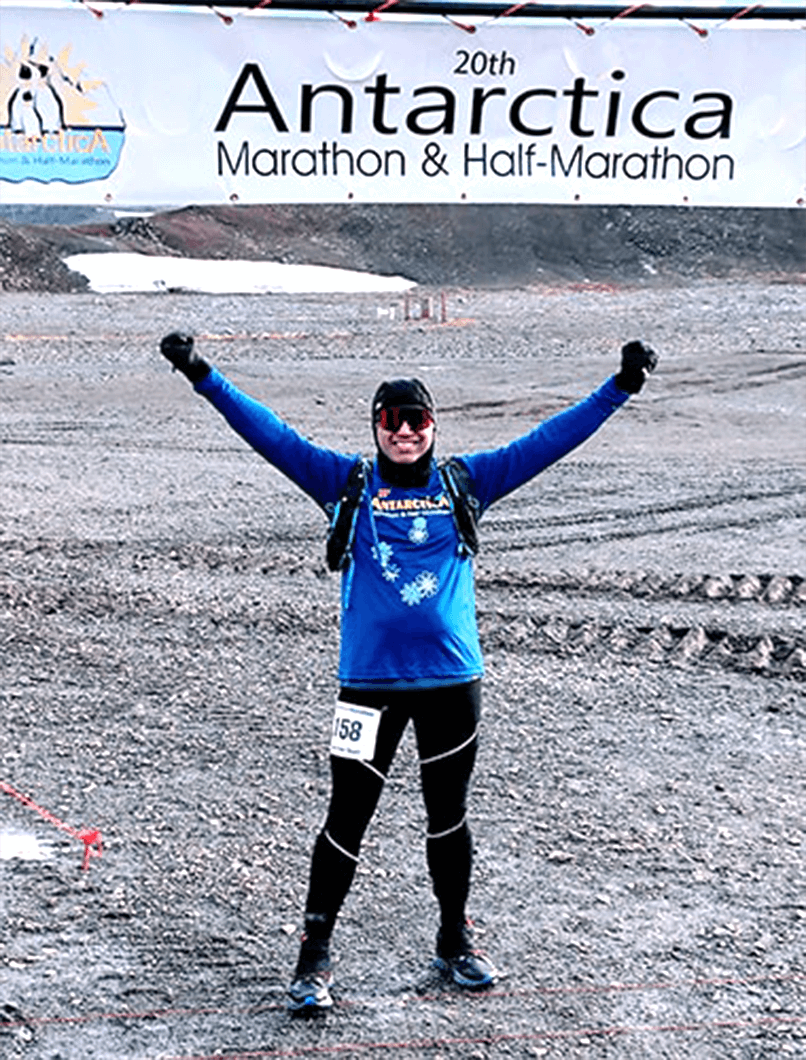 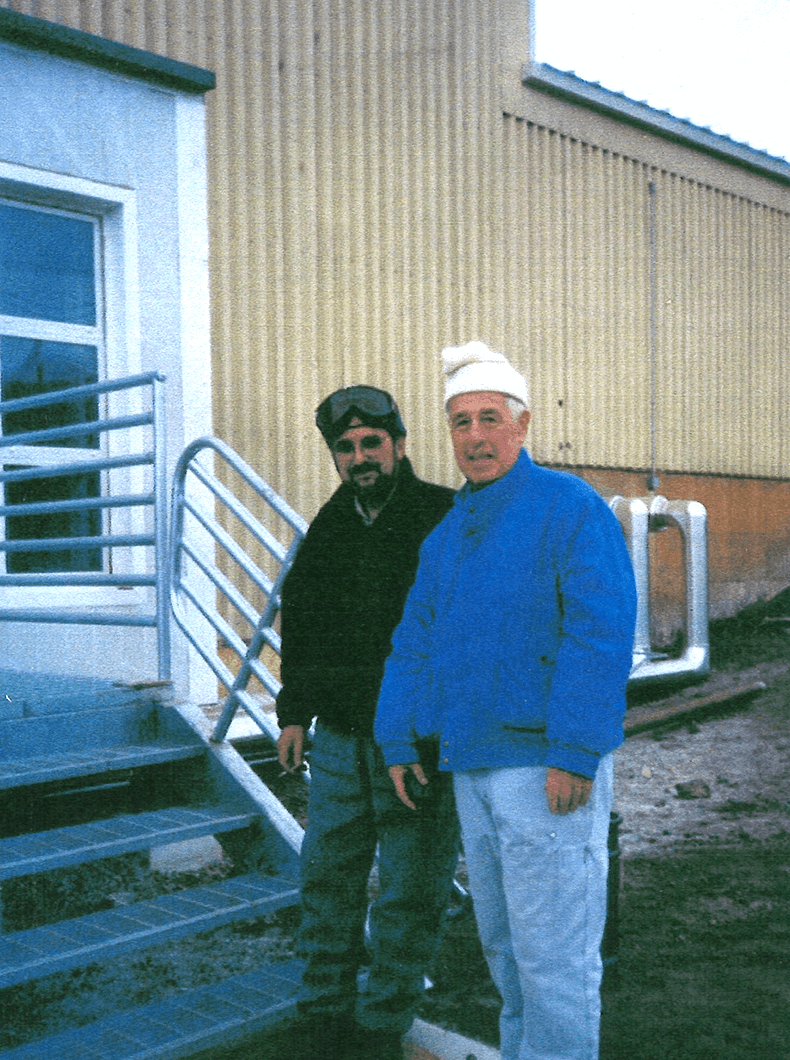 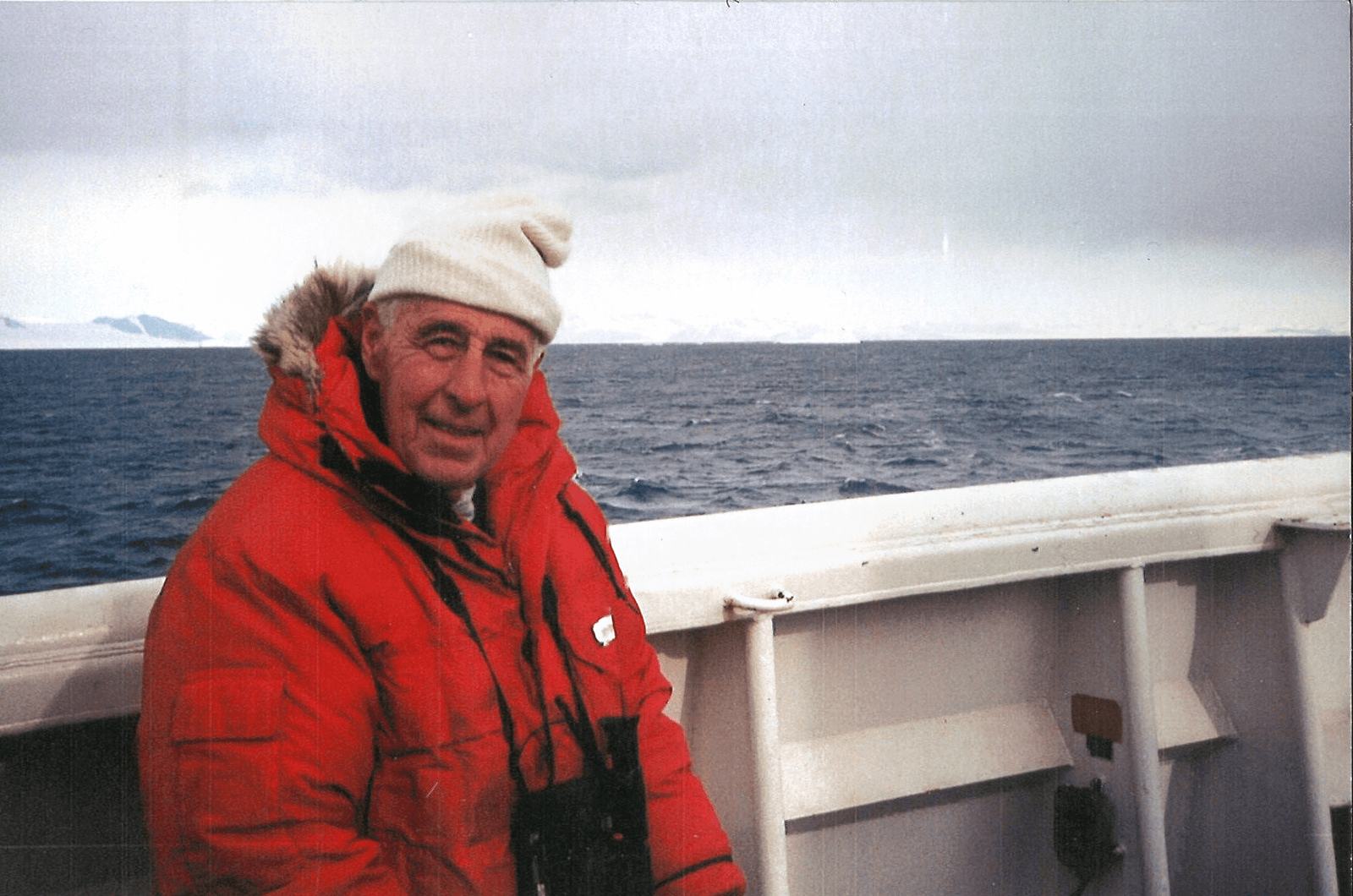 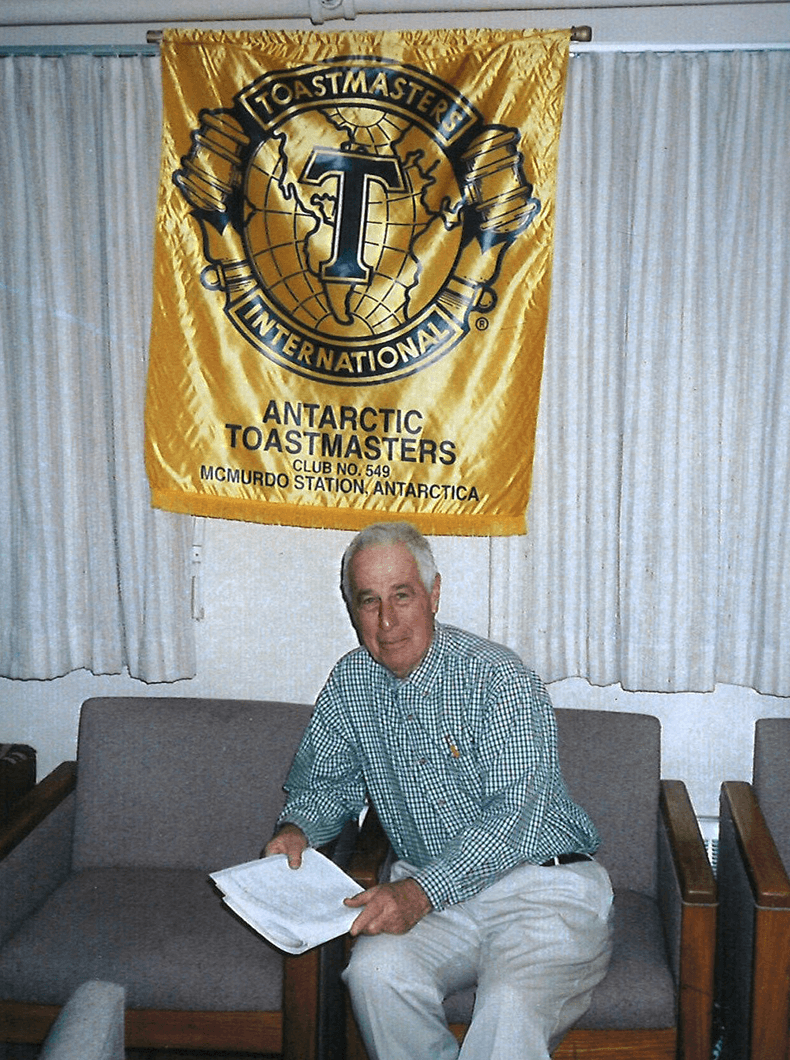 Once we were underway, I approached our team captain, Jeff. To my pleasant surprise, he already knew about Toastmasters and told me he would fit the meeting into the ship itinerary. He recommended scheduling it after the marathon was held. That made sense to me, and I was thrilled! But I still had to get my shipmates interested.

Jeff announced the plans for a Toastmasters demo meeting one night at dinner when most of my shipmates were present, and I kept spreading the word to my new friends on the ship. Among these wonderful folks were Bruce and Helen, a couple from Australia who now live in Houston, Texas. Bruce told me he had been a Toastmaster years earlier. I immediately enrolled him to be Table Topicsmaster for the meeting. By the time meeting day approached, I had about 10 people committed to attend, and five who had agreed to speak.

Meanwhile, there was a marathon to run. In the seven years I’ve been running, I’ve completed 10 marathons in all seven continents in addition to half-marathons and various 10K and other races. The training I did for the Antarctica Marathon was longer and harder than for other races, but in the end, it was mind over body. The 26.2-mile (42-km) course was on St. George Island and included more than 3,000 feet (914 m) of uphill and downhill segments, much of it covered in mud and even patches of quicksand.

We ran in waterproof shoes and multiple layers of appropriate clothing since the trail was ice in the morning and then got very slushy as the day went on and the ice melted. Luckily, it was a sunny summer day, with temperatures in the mid-30s° F (1° C). Of the 116 participants, 98 completed the race.

The marathon run was successful, and now it was time to tackle the Toastmasters meeting. The fateful day came, and slowly but surely the room started filling up. Jeff did a stellar job kicking off the meeting and talking about Toastmasters and why we were all there. I was the Toastmaster for the meeting, and I expressed gratitude to all who came and promised them the session would be worthwhile. Two prepared speeches and eight Table Topics later (led by Bruce as Topicsmaster), we had the rapt attention of all 25 folks in attendance.

As the meeting wrapped up, I asked everyone to sign a commemorative banner. After all, it isn’t very often that a meeting like this happens in Antarctica. Most attendees came by and told me they had a great time and would look into Toastmasters. A month later, I found out that a few had checked out Toastmasters in their hometown and at least one had already joined a club.


Want to read more about the history of Toastmasters in Antarctica? Read this article from 1998.

Satish Shenoy, DTM is a member of Big Basin Toastmasters club in Saratoga, California. He helps create successful technology partnerships; advises start-ups; and is a speaker, author, and runner. He lives in San Jose, California, with his family. Find out more at www.satishshenoy.com.

Back in the 1990s, there was a Toastmasters club in Antarctica—Club 549 at McMurdo Station. Founded in 1955, the research facility is run by the National Science Foundation and attracts scientists from around the globe. It is the largest research station on the continent.

John Donnellon, DTM, of Denver, Colorado, spent three summers at McMurdo while employed as a boiler technician and maintenance specialist with Ratheon Polar Services. He joined the McMurdo club in 1999 and participated each time he went down.

He remembers the club met weekly on Monday evenings in one of the dormitories’ recreational rooms. The club followed the standard Toastmasters meeting agenda and had about 20–25 members during the summer months. “It was a wonderful interaction among people,” he says. “Club members came from all over the world, including scientists from various foreign countries.” After the meetings adjourned, members would frequently continue discussions about what they had heard.

“The members that I worked with all agreed that their experiences at the McMurdo club directly or indirectly helped in their work in Antarctica,” Donnellon says. “While I was there, several of our members gained promotions at their job because of the lessons in communication they learned as members of the club.”

Just getting to McMurdo is a feat. It’s located on the actual continent of Antarctica along the remote east coast, and the nearest landmass is New Zealand. While the summer population at McMurdo hovers just above 1,000 people, the winter population shrinks to around 150. Lasting from February–August, winter brings total darkness with a mean temperature of -51° C/-60° F. There are no flights into or out of the continent during those months, leaving residents completely isolated from the outside world.

According to a December 2000 article in The Antarctic Sun, former Toastmaster Madison Hall joined the club because it offered something new. “All the other clubs around here had something to do with drinking,” he said at the time. As a self-proclaimed introvert who enjoyed working the night shift in the winter months, Hall credited the club with helping him become more comfortable and articulate in front of groups.

Although the club disbanded in the early 2000s, the Toastmasters McMurdo club helped foster a sense of camaraderie. “The isolation is tremendous,” recalls Donnellon. “But the Toastmasters club did a lot to keep people busy and engaged.”

Laura Amann, is managing editor for the Toastmaster magazine. Reach her at lamann@toastmasters.org.