The 2019–2020 International President embodies the lifelong pursuit of self-improvement.

As Toastmasters International nears its 100th anniversary, President Deepak Menon, DTM, says the organization’s programs and growing global member network offer a “formula for the future” in the continuing development of dynamic, talented and confident speakers and leaders.

His optimism is based partly on his experiences in District 82, in India and Sri Lanka, where membership has skyrocketed since the district was founded in 2006. It was ranked the No. 1 Toastmasters district in the world for four straight years, including 2009–2010, when Menon was district governor. During his year of leadership, the district added 75 new clubs—a Toastmasters world record. “The District 82 legacy was not built by its leaders, but by its members,” Menon emphasizes.

Menon, of New Delhi, is energized by that kind of member power and by the universe of prospects the world over who have never heard of Toastmasters. 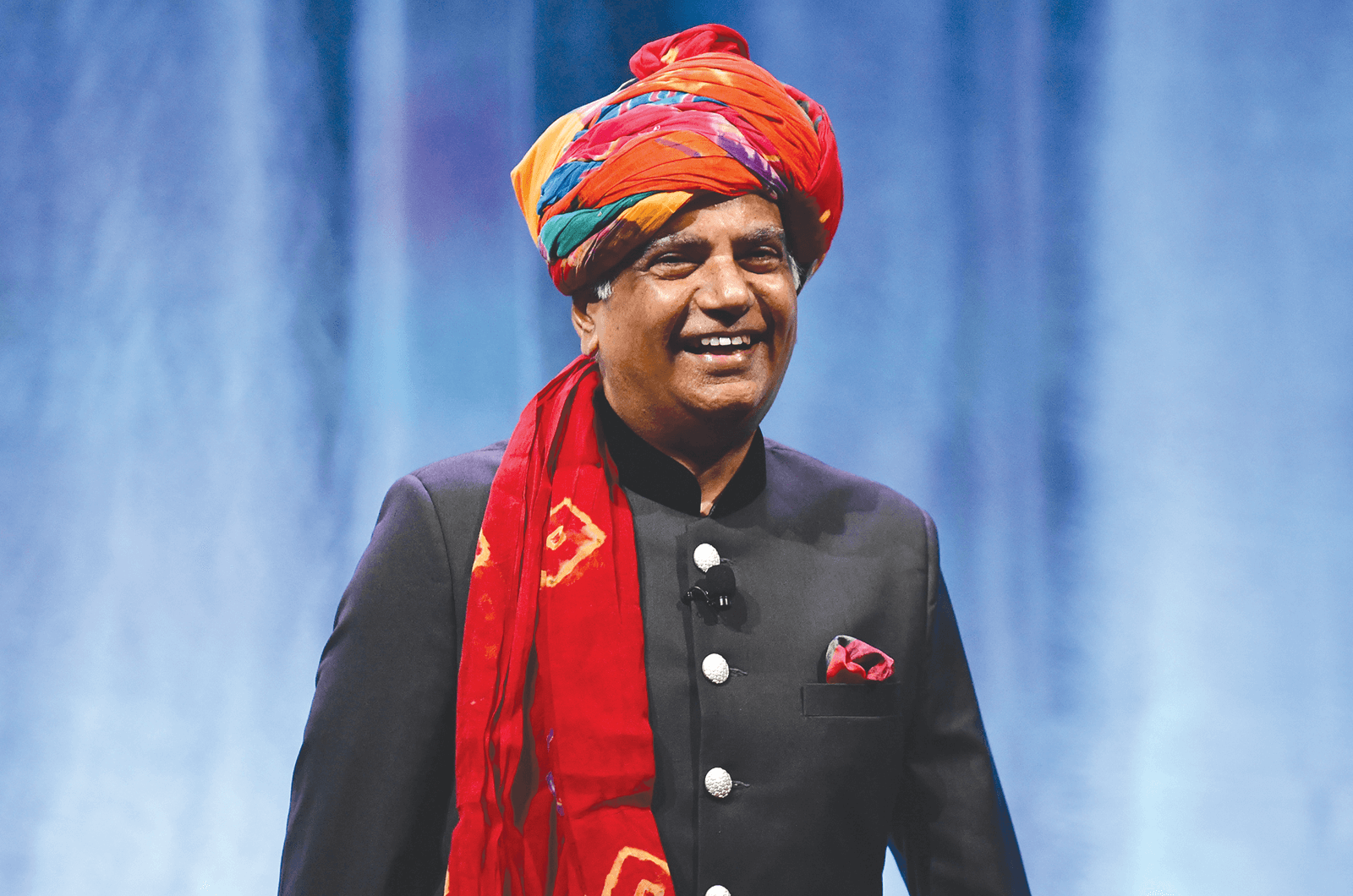 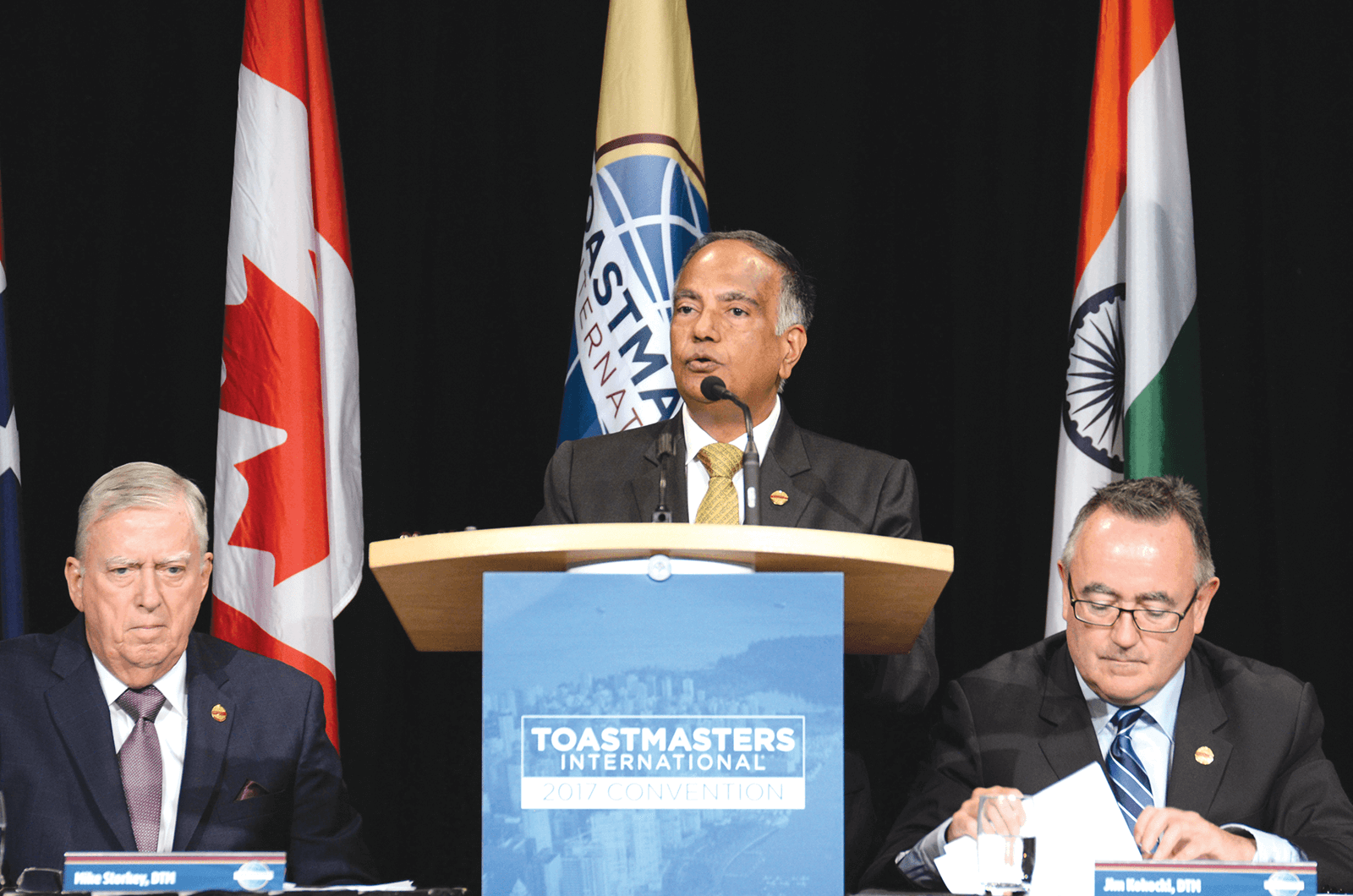 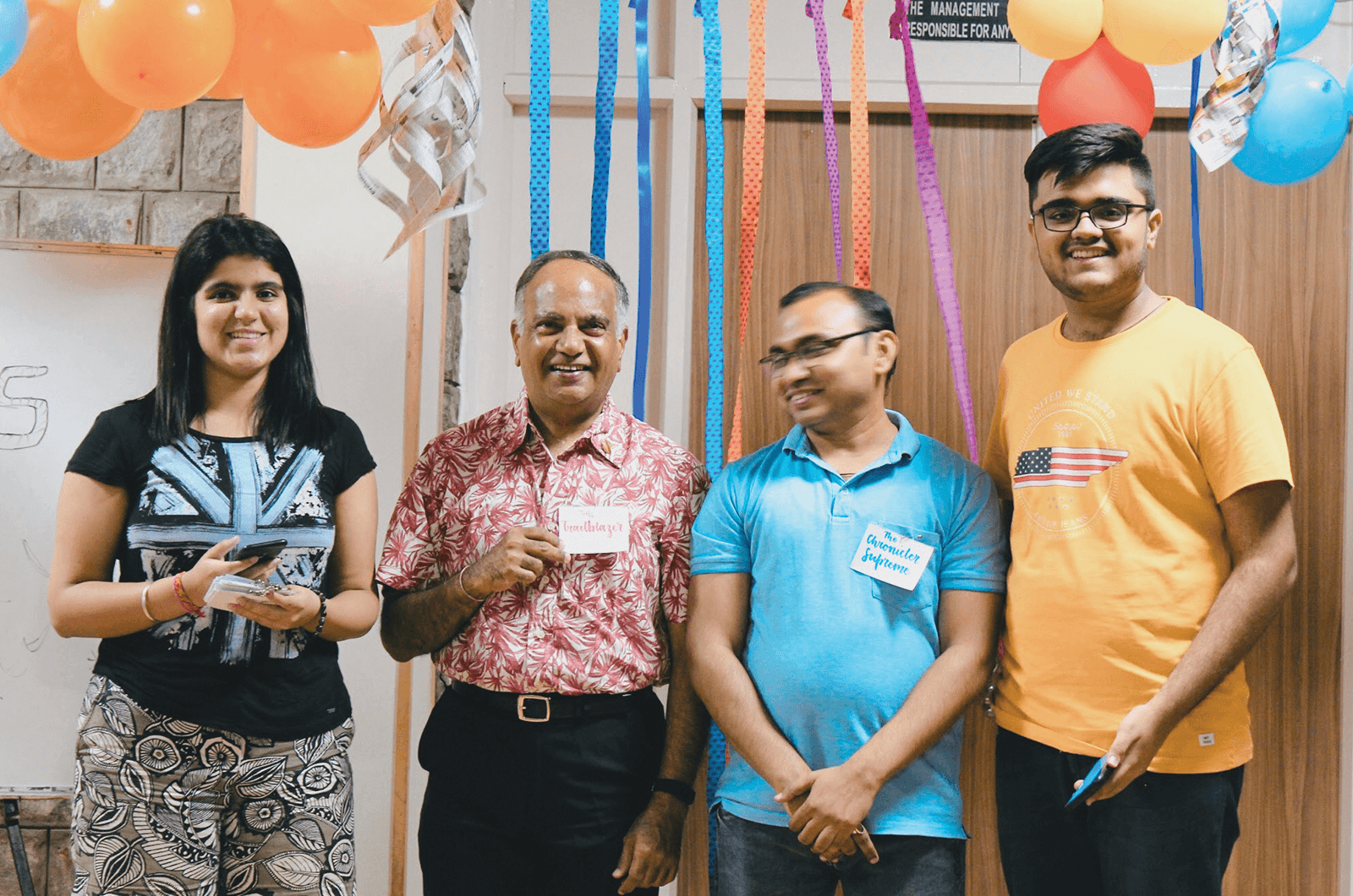 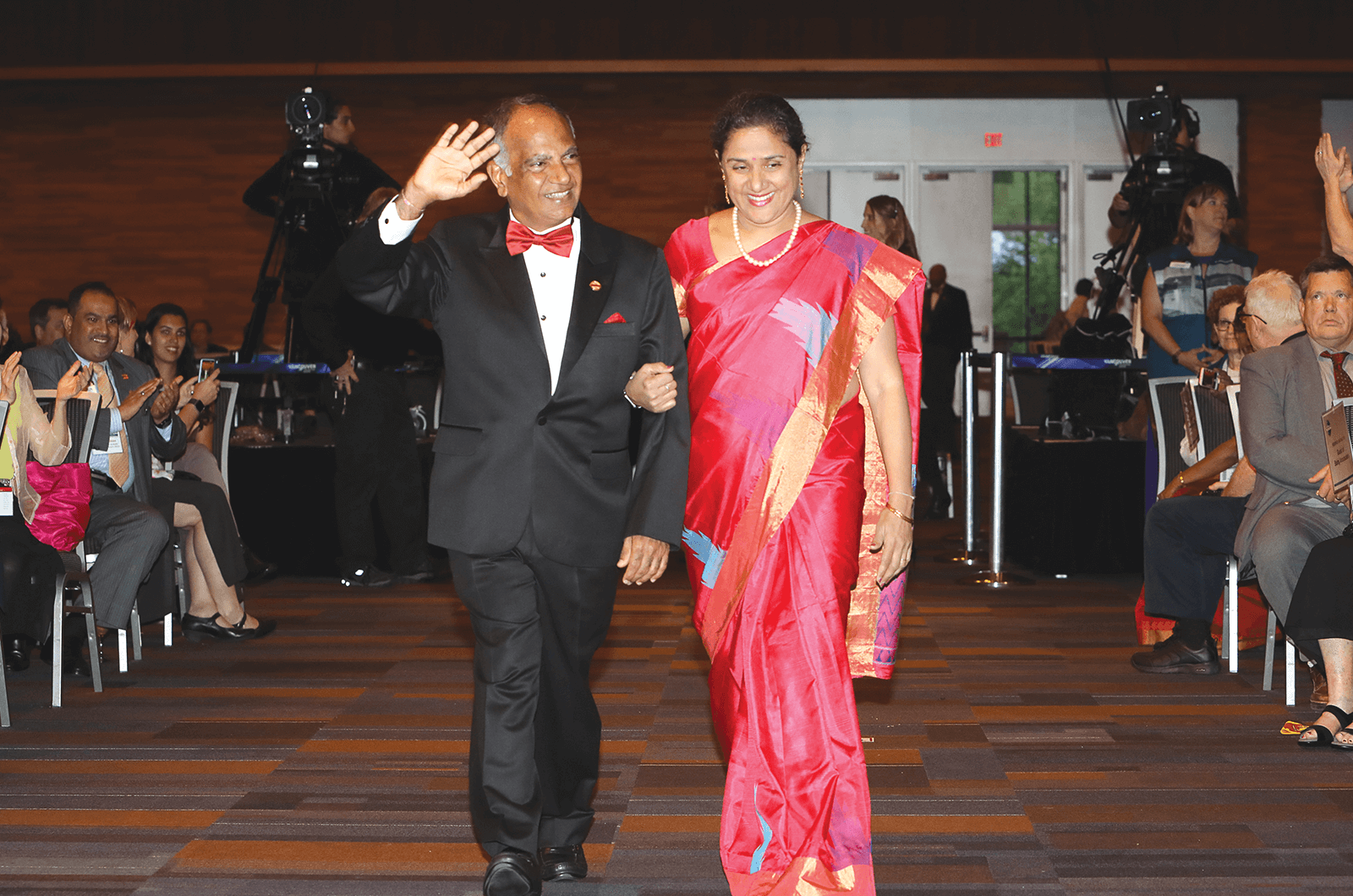 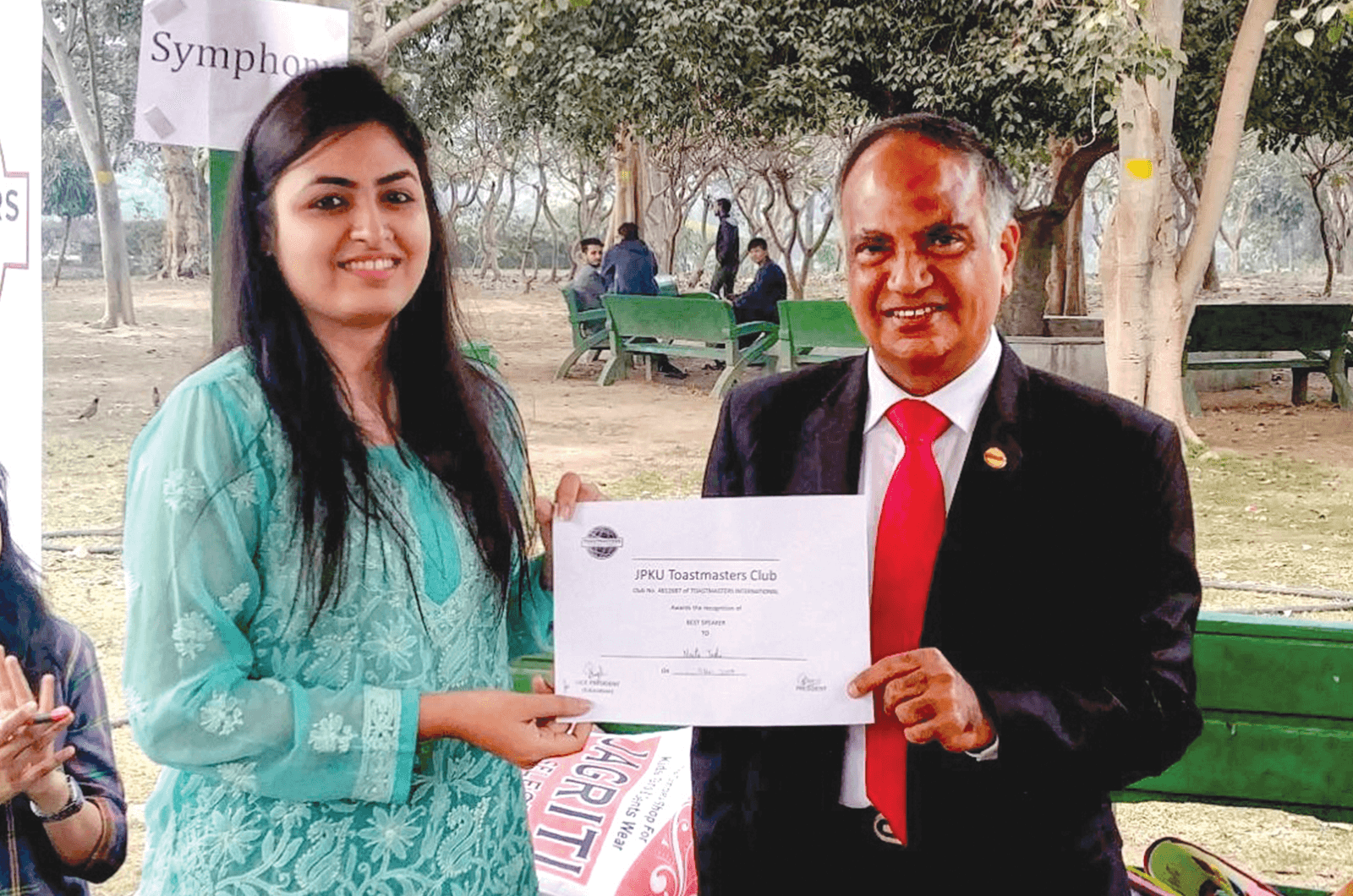 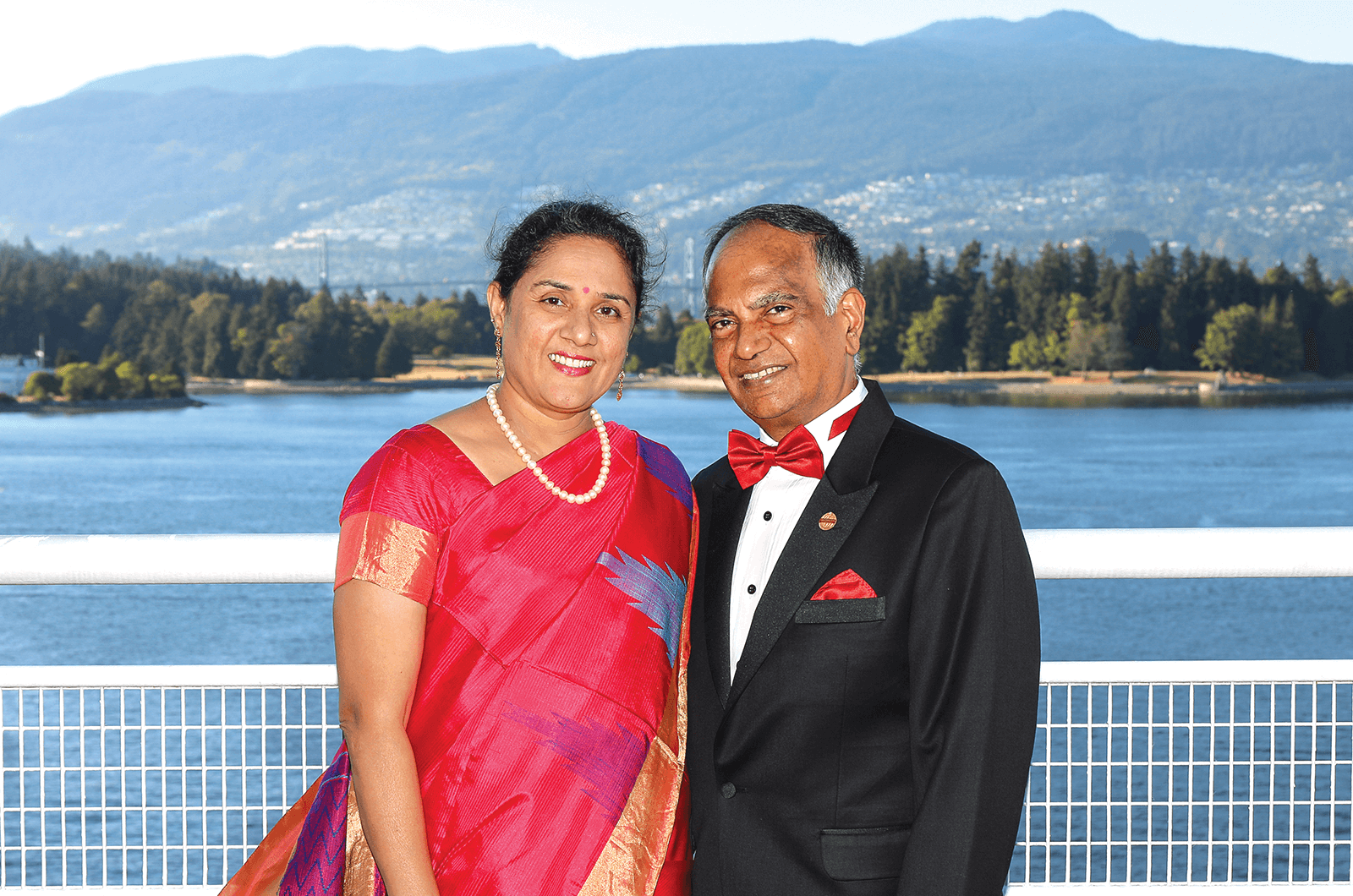 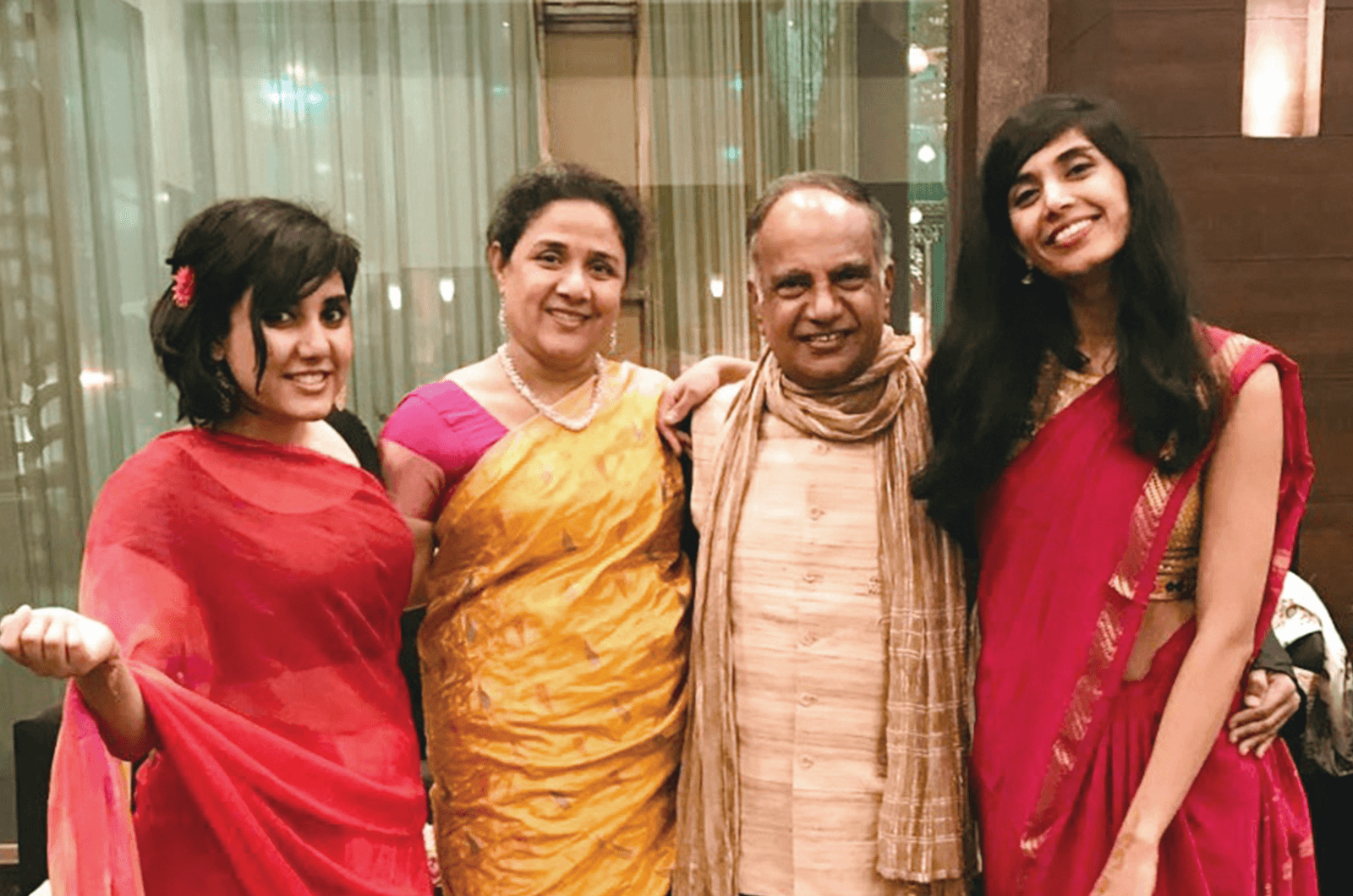 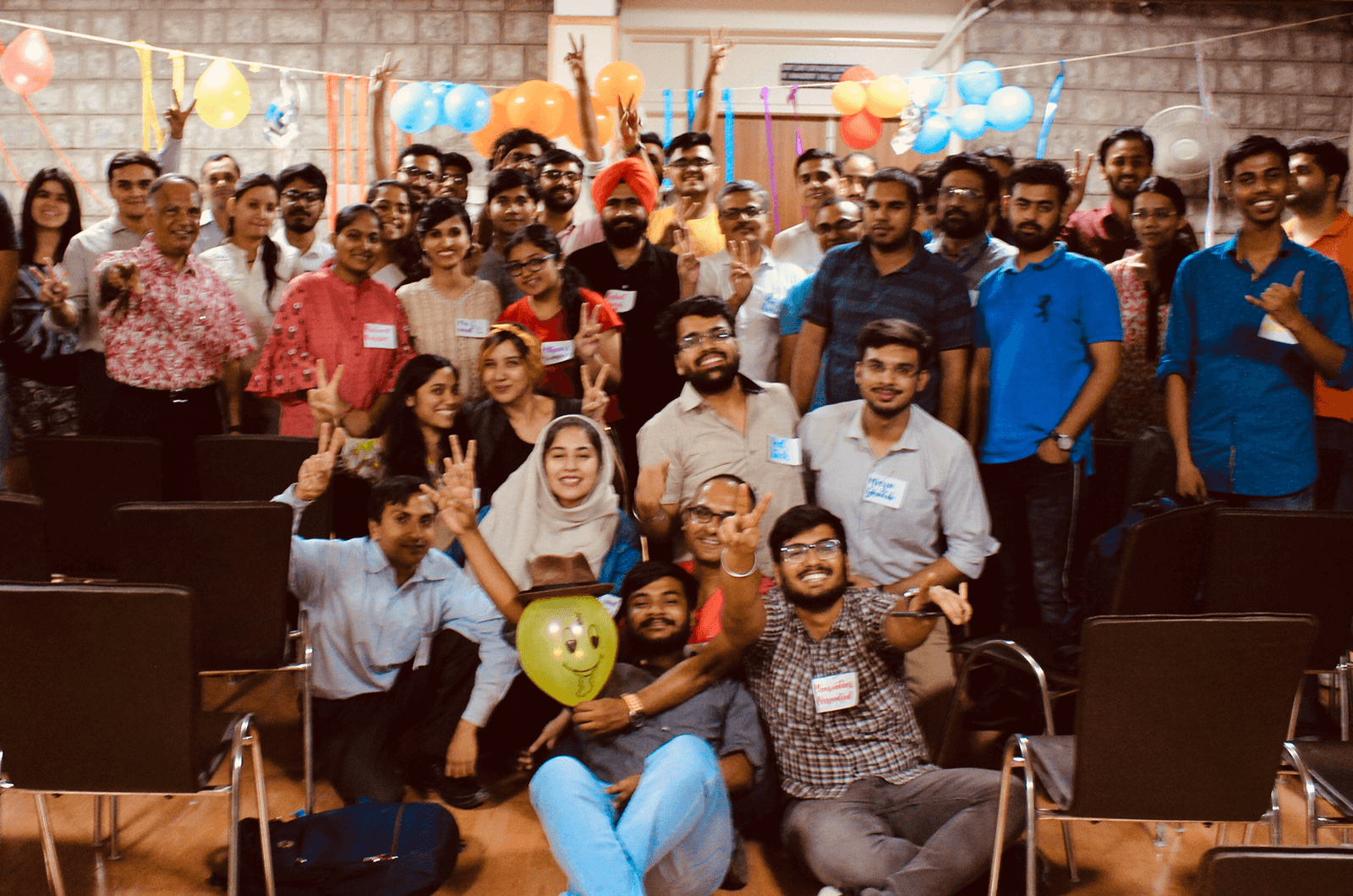 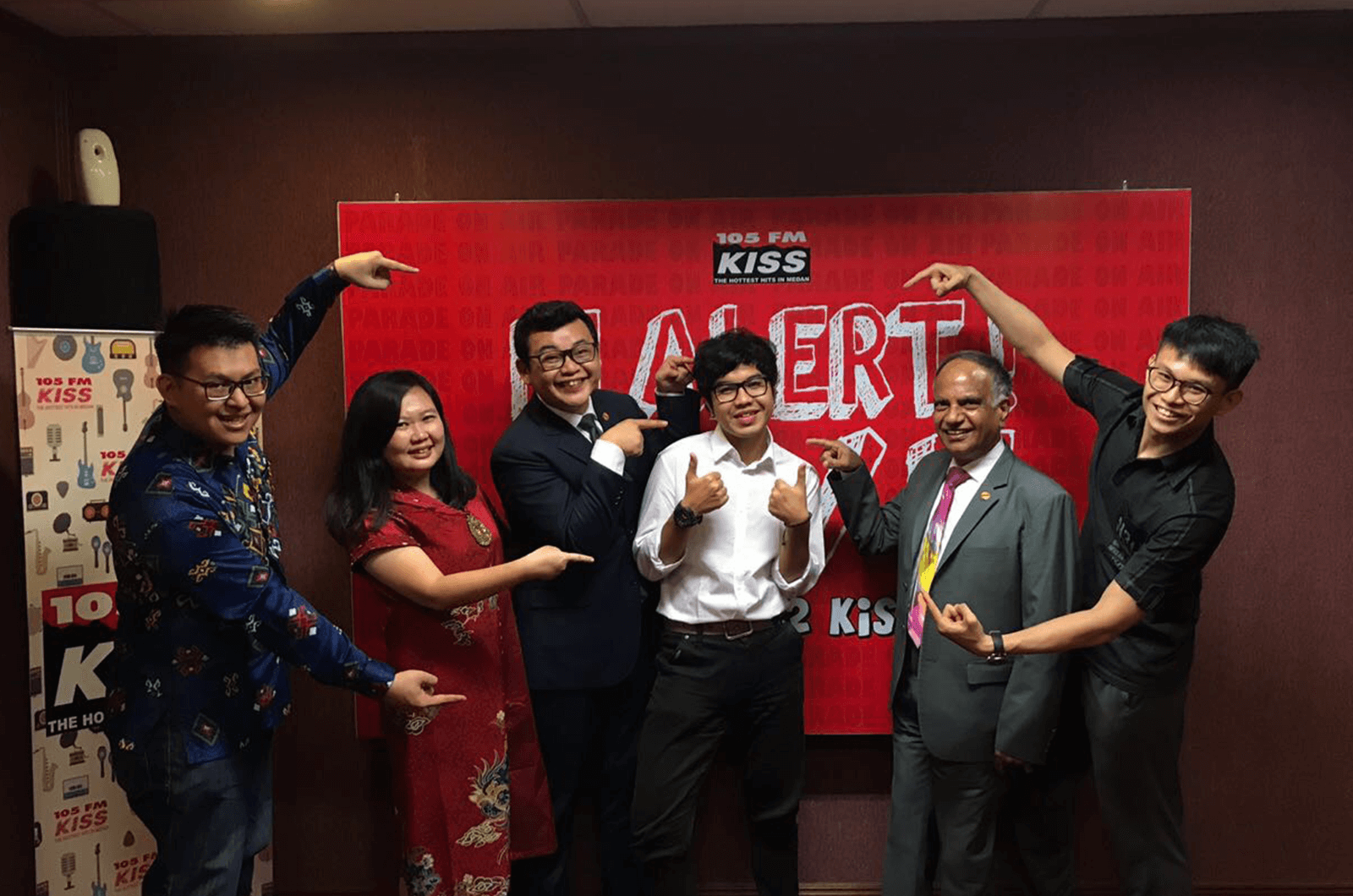 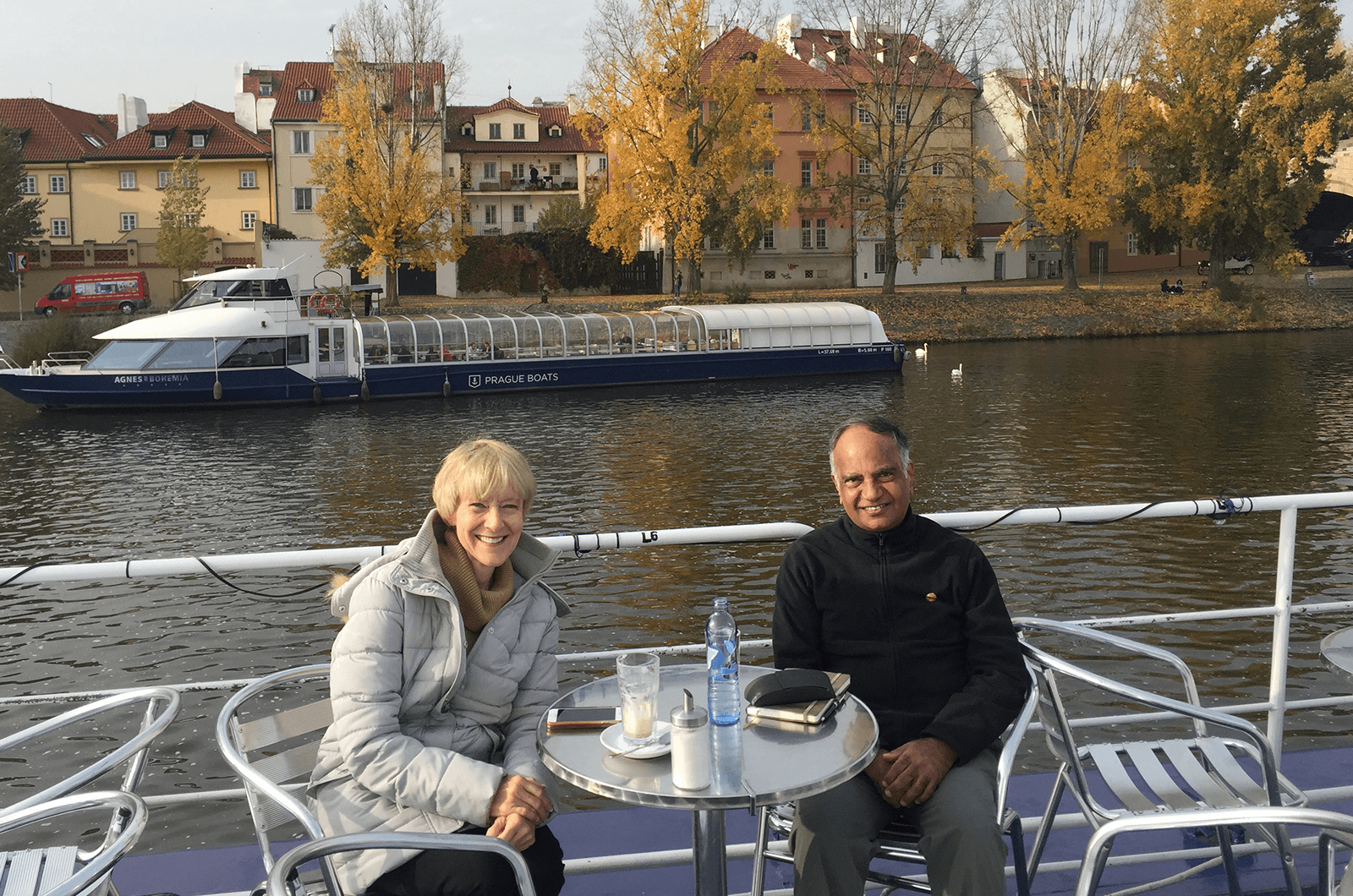 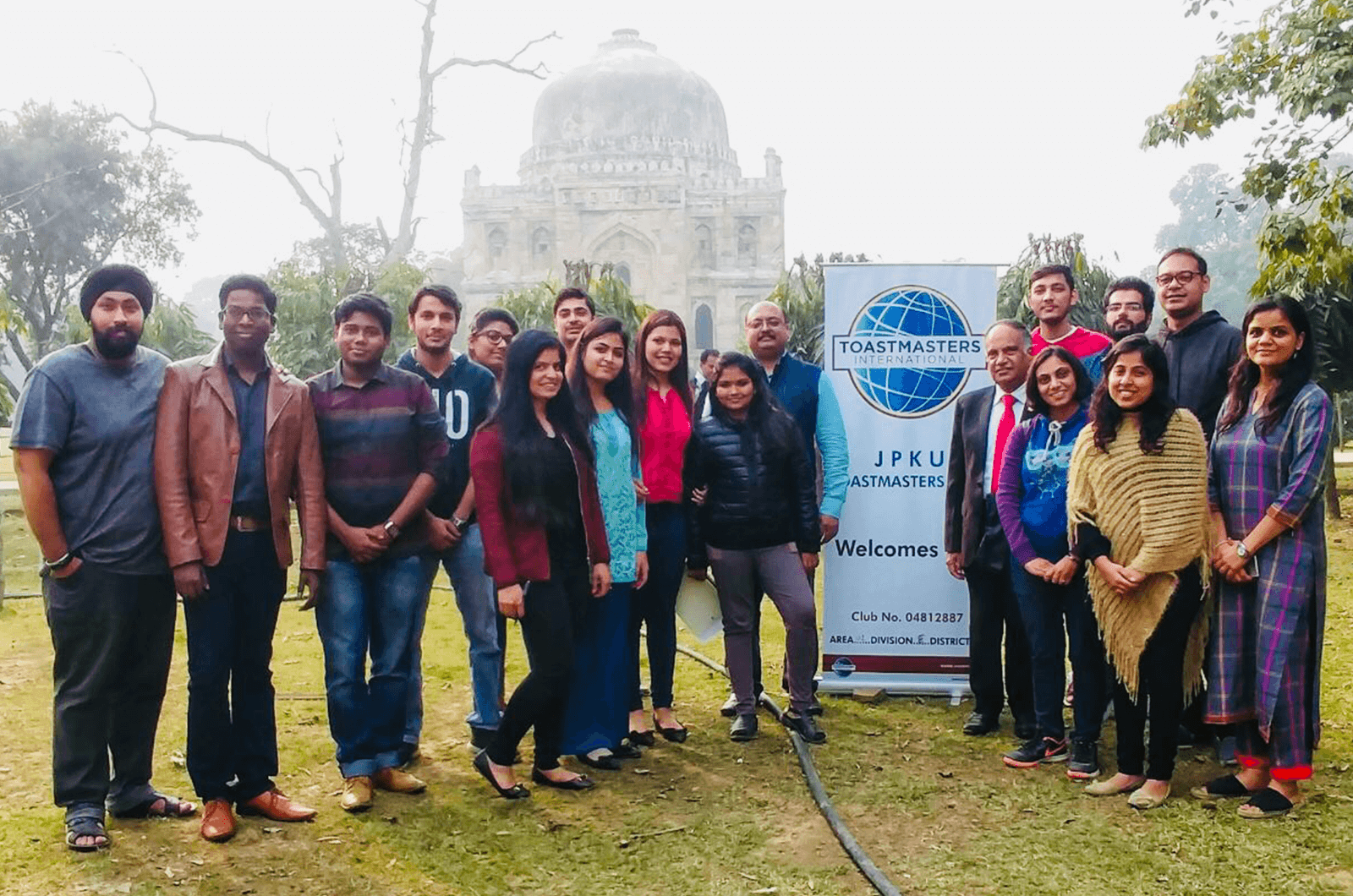 “I hear talk that the districts are saturated and additional growth isn’t possible,” he says. “I disbelieve it. We have the vitality and the members to kickstart outreach to millions of individuals who haven’t had access to our programs or even know about them.” As an example, he cites a recent speech he made to an organization in New Jersey, where 75% of the audience had never heard of Toastmasters, even though the area has three districts.

As a successful professional, Menon felt comfortable in his speaking abilities when he attended his first club meeting in 2002. Once the meeting began, he says it didn’t take long to discover his personal challenges, along with the motivation to overcome them. That night, he joined Toastmasters of New Delhi, the capital’s only club at the time.

His passionate involvement over the years, fueled by remarkable mentors and member connections, led him through Toastmasters’ leadership levels, to the International Board of Directors and ultimately, the role of 2019-2020 International President. These experiences allowed him to discover and hone his leadership talents, and to complete the arduous DTM journey six times.

Professionally, Menon is a chartered accountant at J.P., Kapur & Uberai, a firm he joined in 1980 as a trainee. He was made a partner in 1986. The firm’s portfolio includes typical accounting consulting services, with niche practices in hospitality, real estate, banking, finance and government contracts. Menon specializes in international cross-border taxation.

“The international element keeps the job interesting. There are changes every day around the world—the global business place is never static,” he notes.

A talented, compassionate communicator? An optimistic, solution-oriented advocate for member opportunities and club excellence? Sounds like a good fit for a Toastmasters International President.


You mentioned corporate clubs—why are they so important in the “formula for the future” scenario?

Growing our corporate club sector offers tremendous growth potential for Toastmasters. Success lies in being able to demonstrate the value of Toastmasters to company decision-makers and develop a rich cooperative relationship.

Sometimes these clubs are at risk—they may be quick to form and quick to dissolve unless we take the time to build and maintain those management relationships. It’s critical to demonstrate how Toastmasters’ education curriculum offers unique value to the company—a value they couldn’t find elsewhere for the investment.


Continuing in that “future” vision, talk about reaching out to young people.

I was active in a Toastmasters’ Youth Leadership program and English-language teaching effort under the umbrella of the American Center, which was attached to the U.S. Embassy in New Delhi. I was appointed chief coordinator and enlisted other Toastmasters to assist in using the program to teach English and transform students into leaders.

Over two years, 700 young people in seven cities went through the program, and the transformation was astounding. They used their newly acquired confidence to create positive change in new academic and professional endeavors.

This is another element to our future success. Obviously, young people are the leaders of tomorrow. If you can engage them early, when they have limited inhibitions, it’s easier for them to improve and enhance their skills.


What is the role of the Pathways learning experience in both individual and organizational growth?

I’m very excited about Pathways both for today and for our future. Yes, there are some glitches and challenges to overcome. Yet the overall program is so inventive—it’s meant to help us become the leaders who reach out to corporations and speak the language that business wants us to speak. Clearly we are an organization to build not just speakers but also business and societal leaders.

I also see Pathways as a quicker way for members to learn and advance. Learning in Levels 1 and 2 equals what took six (speeches) in the traditional Competent Communication manual. Yes, Pathways has significantly changed our methodology and education process, but I believe that is a tremendous benefit. We are giving members the ability to identify areas for improvement, start working on those immediately and build on skills steadily, sequentially.


Tell us about your family.

My wife, Kavita, is a high school principal at the Air Force Senior Secondary School in New Delhi. Managing a staff of 70 can sometimes limit her ability to travel with me, no matter how much she might like to. We have two daughters. Rajita has a doctorate in physics and is involved in biosciences work in Boston. In her spare time, she’s passionate about dancing and performs with several groups in the Boston area. Our second daughter, Ramita, has a degree in math but also loves dancing and is pursuing the discipline full time.


What are some of your priorities as president?

International Presidents step onto a sailing ship, with the power to make some tweaks in our journey, but in general we follow the Board of Directors’ Strategic Plan and stay the direction of our course.

I continue to see building global awareness of Toastmasters as a huge opportunity, and I plan to emphasize that outreach during my term.

A Leading Light in India


Stephanie Darling is senior editor of the Toastmaster magazine.
Next Article

A Leading Light in India

One of this organization’s great success stories in recent years has been the dramatic growth of Toastmasters in India. Deepak Menon has played a key role in that story.

When the new International President first joined Toastmasters, in 2002, only a handful of clubs existed in the country. Today there are nearly 900. The first club in India didn’t form until 1991. The first district didn’t emerge until 2006. Now, less than 15 years later, the country has four districts.

When that initial district did form, consisting of 40 clubs in India and Sri Lanka, Menon knew something special was building. However, when he first joined as a member of the Toastmasters of New Delhi (still his home club), it was the city’s only club. At first, says Menon, the club was content to stay in its own bubble.

“We weren’t that aware of other Indian clubs or clubs elsewhere in the world. We were happy within ourselves, learning and growing.” But as the club grew, so did its ambitions. “The New Delhi club started getting a bit lonely,” says Menon. “As we got better, we wanted to start more Toastmasters clubs.”

As Menon has often noted, business community support was vital to Toastmasters growth in India. Of the 875 clubs in the country at the end of the 2018–2019 program year, more than half—480—are company-sponsored clubs. Menon says the large percentage is proof that companies in India realize that Toastmasters training is invaluable to their employees, and, ultimately, a cost-effective business asset.

Indian leaders, through their dynamic drive, spurred club growth, giving rise to clubs and members who were increasingly inspired by the spirit of self-improvement, especially in English language and presentation skills.

District 82 now has more than 300 clubs—more than any other Toastmasters district—and about 8,000 members. It has also been the home of Past International President Balraj Arunasalam (2017–2018), DTM, and 2014 Toastmasters World Champion of Public Speaking Dananjaya Hettiarachchi, both of Sri Lanka.

Following another membership surge in the northern, eastern and western parts of India, District 41 was formed in 2011. Menon’s home club is now part of that district. It was Smedley Distinguished—the top level of the District Recognition Program—in 2018-2019, and was President’s Distinguished the three years before that.

District 41 covers over 200 clubs in India, Bangladesh, Bhutan and Nepal. Since 2014, two more districts have formed in India: districts 92 and 98.

Thanks to all the members who submitted questions online for the International President’s response. Here are just a few, along with answers from Deepak Menon.

Communication in any form is important; learning to communicate effectively through speech is vital. Written communication allows the writer to ponder over the subject matter and edit the communication until it meets with our satisfaction. Oral communication requires an agile mind, fluency of tongue and the ability to hold the interest of the audience—essential skills we learn in Toastmasters.


How can a new club president motivate new officers and new members?

The president’s vision lays the foundation for the club’s future success, and for the growth of members and leaders. He or she should help officers understand their roles, be a mentor, encourage teamwork—all these make for a vibrant, productive club. Dive into this role. What could be more satisfying than seeing members achieving all they want from Toastmasters?


How has your leadership style changed over 17 years?

It has undergone a significant change. My early leadership style was based on self-reliance; I thought I could fulfill all my leadership responsibilities on my own. I was a lone player. But as I climbed the district leadership ladder, I realized I could only be successful as a leader if I worked with a team by effective delegation of responsibilities. Toastmasters transformed me into a team player!


What modern leader do you admire as a public speaker?

A modern day leader who has captured the attention of the world through his charisma and public relations skills is the present Prime Minister of India, Mr. Narendra Modi. He is a leader worth emulating for the public speaking skills he displays.


How would you advise me if I want to become Toastmasters International President one day?

Excel in every leadership role that comes your way; use every opportunity to gain skills, knowledge and experience. Understand the organization and have a strategic vision for its future—all these can help ensure that you can one day be a successful International President.


What is one question you always wanted to be asked?

This is the one question I have never been asked and has never occurred to me! Usually I am asked questions about the organization or about my leadership journey, but never about my life as a member before I started on the leadership track. The experiences as a member and all that I gained in that capacity is what propelled me into leadership.


What is a day in the life of a Toastmasters president like?”

The day starts early, sometimes as early as 3:00 a.m.! There are meetings to attend or conduct from those early hours of the day; messages and emails to respond to from members around the world and from the Board; time spent on preparation for Board meetings and committee work; fulfilling mentoring responsibilities; liaising with the Chief Executive Officer; monitoring and tracking the organization’s progress throughout the world and working with the Region Advisors in ensuring that every district receives the support it deserves. This is in addition to the president being hard pressed in finding time to fulfill their own professional and personal commitments! And then there is the travel…

With all this pressure, attending and actively participating in club meetings provides much needed relaxation for the president!


As Toastmasters ambassadors, what can we do, rather than just speaking, to demonstrate the height and depth of leadership to various corporations across different industries and truly justify our tagline, ‘Where Leaders are Made?’