Giving a Speech About Yourself?

Build your story around people who influenced you the most.

If you are a successful professional—or you aim to be—it is likely that you will be asked to speak about yourself at some point in your career. Of course, all Toastmasters learn to do this in their Ice Breaker speeches. But a more robust speech about your background and how you attained your current stage in life might be appropriate with a promotion, accepting an award or some other community recognition.

Even seasoned speakers can be shaken by the idea of speaking at length about themselves. Didn’t our parents teach us to be humble, work hard and keep our heads down? Giving a speech about how successful we are might feel immodest or boastful. Not if it’s done properly.

As a professional speaking coach, I advise clients who come to me for help with crafting a speech about themselves to use two simple strategies: 1) Tell your life story in three clearly defined acts; and 2) Remember that no one becomes successful alone. While discussing your experience, be sure to give credit to the family members, colleagues and mentors who guided or supported you through your career. Highlight your success while thanking the people who helped you find it.


The video above is from www.frippvt.com.

Look at your life story as if it were a play: Act I: When you were young; Act II: When you were more mature and starting your career; and Act III: When you achieved success. Audiences want to know your personal story and details about your journey to success. Try to convey where you came from, how hard you worked and what motivated you through your life, and then finally, how it feels to be where you are now—always remembering to mention the people who helped you along the way.

Here’s an example of what I mean: Consider Alex, a successful executive, who was to give a speech about his role as president of a real estate franchise. Speaking at the company’s annual conference, Alex’s audience of 700 realtors knew he was a multimillionaire. They did not, however, know of his humble beginnings.

“This is the secret to talking about yourself comfortably: give the best lines to your characters.”


Act I: His opening: “I never met my mother and didn’t meet my father until I was 14 years old. I was raised by my grandmother, and life was perfect.” Scene I, Act I of his life “play” gives the audience a clear sense of who he was as a child. He continued by describing his first hero—his grandmother. He talked about the influence she had on him, her philosophy that would inspire his own, the unconditional love she gave and her death when he was 14. That’s when Alex went to live with his father. Suddenly, he was forced to live with a person he never knew and stepbrothers and sisters he hadn’t known existed.


Act II: The owner of the business where Alex worked when he was 20 years old brought in a business consultant who noticed Alex and realized that he had great potential and initiative. The consultant guided him toward going into business for himself. That consultant gave him the courage to pursue entrepreneurism.


Act III: In this act, Alex talks about the man he referred to as his adoptive grandfather. This man also encouraged and guided him to expand his business beyond what Alex had believed possible. Alex included the actual words of support his adoptive grandfather said to him. This is a great example of the kind of story you can tell about yourself that helps the audience feel connected. In this way, his three influencers were the “heroes” of the speech, rather than Alex himself.

Alex’s presentation described the influence of his grandmother, a business consultant and his adopted grandfather. This is the secret to talking about your self comfortably: give the best lines to your characters. Repeat their advice in your speech—let them deliver the dialogue.

When you are putting together a speech about yourself, design it in three acts and give credit to all who helped put you on the right path. This strategy will help alleviate any anxiety.

Patricia Fripp, CSP, CPAE is a Hall of Fame keynote speaker, executive speech coach and online learning expert. She was the first woman president of the National Speakers Association. She joined Cable Car Toastmasters in San ­Francisco in 1975. For more information, visit www.frippvt.com.

What Should I Talk About? 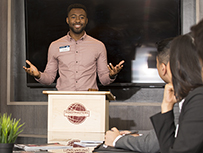