Surgeons and researchers at a Canadian university merge medical talents with communication skills.

An elite, global team of surgeons and scientists is conducting cutting-edge research at the University of Alberta in Edmonton, Canada. Many of these medical experts belong to a Toastmasters club near the university and bring their communication skills to the lab.

The university’s Faculty of Medicine and Dentistry has various departments, including the Department of Surgery. Within that department is a research team focusing on surgical-simulation training, and it is regarded as a world leader in this type of training. The team includes a number of Toastmasters, and they credit their communication skills with helping achieve that success.

The team uses robotic and other innovative tools to give medical students a uniquely realistic experience in surgical training. For example, the team is developing virtual reality and augmented reality technology for surgeon training. It aims to build a surgical robot that can remove tumors in the prostate, brain, and liver. And talk about a hands-on approach: The same group is developing a robotic teaching system to transfer surgeons’ miniscule hand motions from an expert to a novice.

The team’s ultimate goal is saving lives. “Improving surgeon training will cut surgical procedure time and reduce infection risk. We are doing something fantastic—combining IT with healthcare,” says Dr. Bin Zheng, Ph.D., a surgeon who leads University of Alberta’s surgical-simulation research team. “We are training the next generation of surgeons using smart technology.” 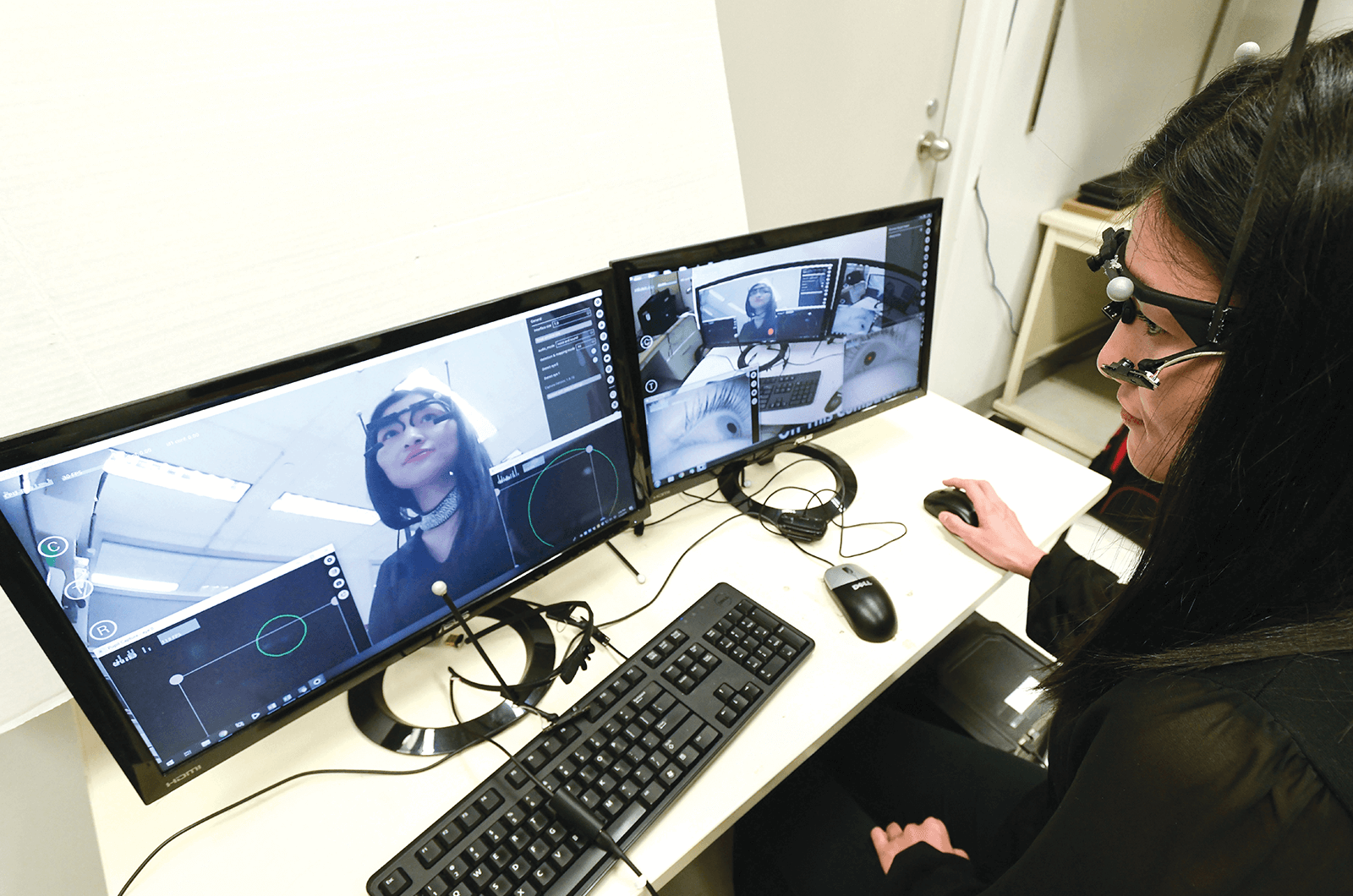 Dr. Wenjing He uses eye trackers to monitor the eye movements of surgeons at the University of Alberta. Photo by Matt Martin

In this hothouse of training and research, strong communication skills are critical. Both the university’s surgery department and the nearby College Plaza Toastmasters club benefit from each other’s presence, say members of both groups.

“The synergy between the two, and their innovation, is incredible,” says Oksana Babenko, Ph.D, a charter member of the College Plaza Toastmasters club and a medical education researcher in the university’s Faculty of Medicine and Dentistry. “Researchers bring science to the Toastmasters club, making it accessible to lay people, and the club enables [the researchers] to be effective communicators back in their labs.”

The ability to effectively communicate constructive feedback is also a valuable asset, says Dr. Zheng, an associate professor of surgery who collaborates with surgeons, engineers, clinical educators, and psychologists to develop simulators and assess the effectiveness of simulation-based programs. “Critical comments given by Toastmasters during our research meetings help improve the brainstorming quality among lab members and help yield better research.”

When the Toastmasters-researchers aren’t presenting in lecture theaters, they can be found in their futuristic laboratory, deep in the labyrinth of the university’s Heritage Medical Research Centre, behind a nondescript gray door labeled 162 HMRC. Here, at a bench in the open-space lab, robotic “hands,” which one day will teach surgeons how to suture, are hard at work transmitting a veteran surgeon’s nanoscopic motions to a novice’s fingertips.

In another part of the lab, physician-scientist Dr. Paola Sánchez—a member of the Fun Speakers Toastmasters, another club located near the university—dons goggles that have a tiny tracker built into the eyepiece to record her eye motion and which plunge her into a virtual brain.

“Researchers bring science to the Toastmasters club … and the club enables [the researchers] to be effective communicators back in their labs.”

In the corner is Dr. Wenjing He, M.D., Ph.D., a key leader of the College Plaza club. Her computer hums with custom-made platforms and analysis tools as she number-crunches her own eye-tracking data to boost surgical team performance. She attaches eye trackers to team members to monitor their eye movements. The team is also monitoring surgeons’ brainwaves under stress to develop eye-tracking technology.

Eye synchronization is an important part of surgical teamwork. Surgeons, nurses, and anesthetists working together need to effectively coordinate their eye movements—in simple terms, they need to be looking at the same place at the same time. The more their eye gazes are in sync, the more time can be saved, which can be critical. Dr. He’s research helps with this kind of training. 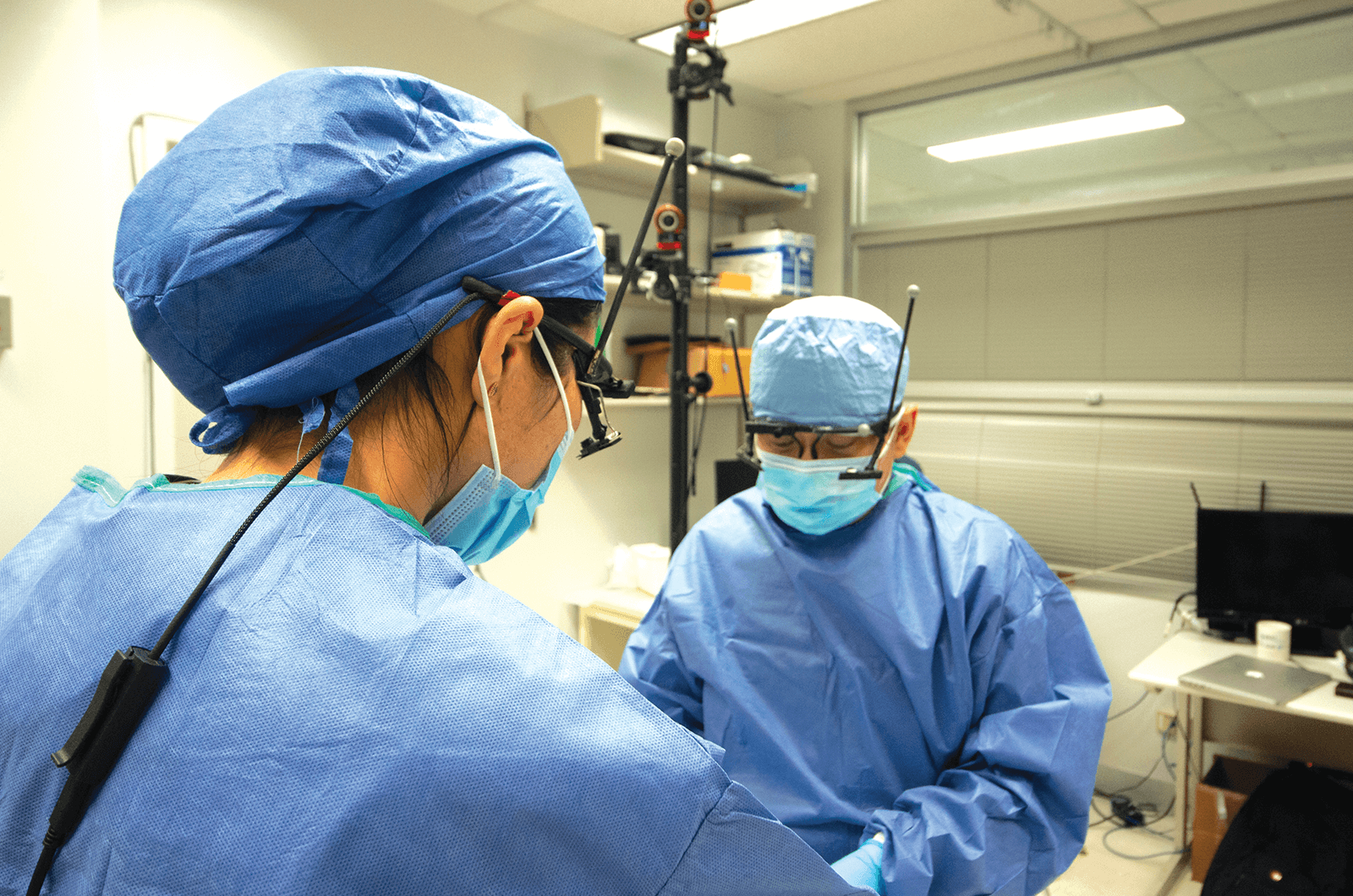 Dr. Wenjing He and Dr. Yuandong Li (right) perform a simulated surgery for training purposes. Dr. He is a leader in the nearby College Plaza Toastmasters, while Dr. Li is a former club member who now works in China. Photo provided by the University of Alberta

She says she applies her Toastmasters skills in her work, including when teaching medical and pharmacy students. “For example, I ask the students to introduce themselves one by one and answer a question at the beginning of each class,” explains Dr. He. “This [process] is what I learned from Toastmasters, and I apply it to a real situation. It helps the students to get to know each other better, share their vulnerabilities with each other, and in the end, they get closer.”

Dr. Babenko, the medical education researcher, says she draws on her Toastmasters training when she works one-on-one with researchers who need to present their ideas for research studies or grant applications to more seasoned researchers. She coaches them on how to best prepare for their presentations.

College Plaza Toastmasters was founded in 2013. The flourishing community club has about 25 members, most from the university (including a number of students) but also some from the private sector, such as an engineer, architect, and business analyst. And when collaborating researchers visit the University of Alberta from hospitals and universities around the world—for between a few weeks to a year—they often come to College Plaza club meetings.

One such visitor, Jani Koskinen, a graduate student in computer science, is looking at setting up a club in his town when he goes home to Finland.

“Being able to clearly communicate your ideas to other researchers is a very important skill in academia,” he notes. “Even in the research world, simply presenting the information is often not enough: You must also deliver your presentation in a captivating way to stand out from others. Toastmasters lets me gain confidence and practice the public speaking skills I need to make my presentations interesting.”

As successful as the College Plaza club is, only last year it was struggling mightily—facing closure, in fact—after losing most of its private-sector members in a fierce recession that affected the prairie province of Alberta. But thanks largely to the efforts of Dr. He, the club has enjoyed a resurgence. When she was elected club president, she reached out to her university colleagues, recruiting students and staff from many disciplines. The university infusion had a dramatic impact: College Plaza Toastmasters made a speedy recovery and became a top-performing club a little over a year later. It added about a dozen members and earned President’s Distinguished status in the Toastmasters Distinguished Club Program—the first time the club has achieved that distinction. 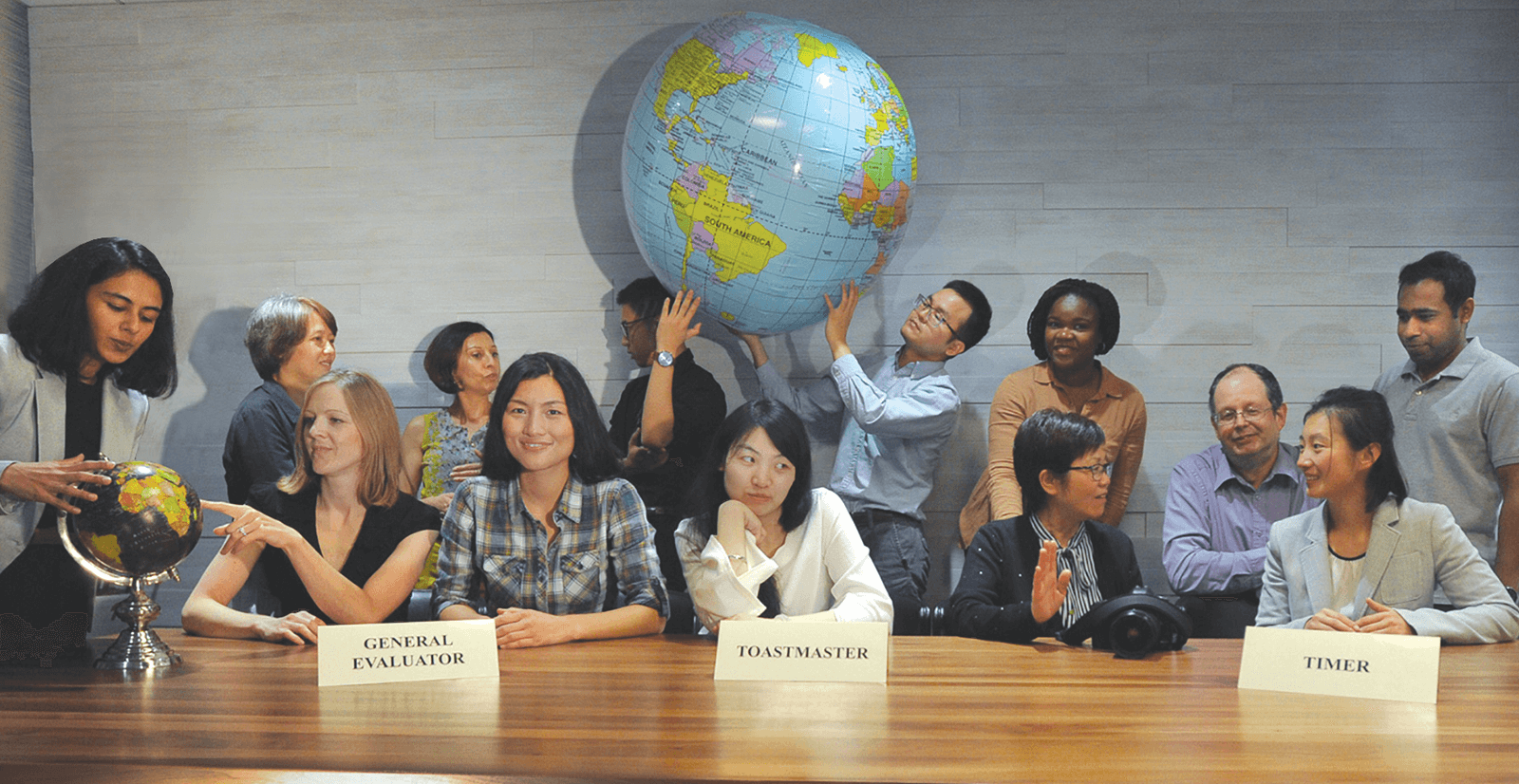 Members of the College Plaza Toastmasters speak many different languages. The diverse community club includes doctors and researchers from the nearby University of Alberta. Honing their communication skills helps their work in the field of medicine. Photo by Kaiyang Fan and Suki Liu

The club has great diversity—with 22 different first languages spoken by members—as does the university surgical-simulation group. “Our research team is multicultural, passionate, and open-minded; we regard each other as family members,” says Dr. Sánchez, who specializes in augmented and virtual reality surgical simulation research. This multicultural family comes from Bulgaria, Brazil, Canada, Colombia, China, Iran, Iraq, Uzbekistan, and Finland.

Dr. Babenko learned English as her third language, after Ukrainian and Russian. Dr. Sánchez and Dr. He, natives of Colombia and China, respectively, co-founded the group’s Mandarin-English-Spanish language learning program.

When referring to the influence that Toastmasters has had on the team’s research, Dr. Sánchez says, “Teamwork is a key word in Toastmasters; meetings cannot work without the collaboration of every member. Similarly, in my lab, I work on a multidisciplinary team where each of us contributes to reaching common goals.”

“Being able to clearlycommunicate your ideasto other researchers is a very important skill in academia.”

The team attracts researchers from many fields: medical education, neuroscience, computer science, physics, artificial intelligence, nursing, engineering, and dentistry. The group even has an artist and fashion designer, Suki Liu, a College Plaza member who makes surgical-simulation manikins—human-shaped models used to simulate the human body in medical and other scenarios. “Toastmasters boosts my confidence, which helps me relax in a team setting and so spurs my creativity,” says Liu. In the 14 months she’s been a member of College Plaza, she went from not speaking English to competing against Anglo-Canadians in their own language in Toastmasters speech contests.

The reciprocal benefits for the Toastmasters club and the university can be seen in various ways. For example, all applicants to Canadian medical schools have to answer multiple mini-interview questions—basically, Table Topics—often with a focus on ethically challenging scenarios. They can practice first at a Toastmasters meeting, where a club panel answers hardball questions from a panel moderator—and faces audience challenges to their answers. (This exercise is also part of a Pathways project in the Presentation Mastery path.)

The club also provides panels of scientists for university graduate students who want to practice defending their theses. Healthcare researcher Yilina Liubaoerjijin, who learned English as her third language after Mongolian and Mandarin, recently presented her master’s thesis to the club and fielded questions from its scientists, the week before her thesis defense.

Surgeon-scientist Dr. Yuandong Li, a former College Plaza Toastmaster, who is now working back in China, also points to the value of the club experience. Communicating effectively is vital for a doctor, he stresses, whether it’s talking with a patient or presenting research to colleagues.

“Club participation has improved my communication skills significantly,” he says. “Giving speeches helps me to summarize my ideas more concisely, so I can share my opinions with research colleagues more clearly and save time.”

Nicholas Wilson is a member of the College Plaza Toastmasters in Edmonton, Alberta, Canada. He is the communications coordinator for the University of Alberta’s Department of Surgery.

A Nurse with the Healing Power of Humor