Skewered for his singing, American Idol celebrity finds success in the end. 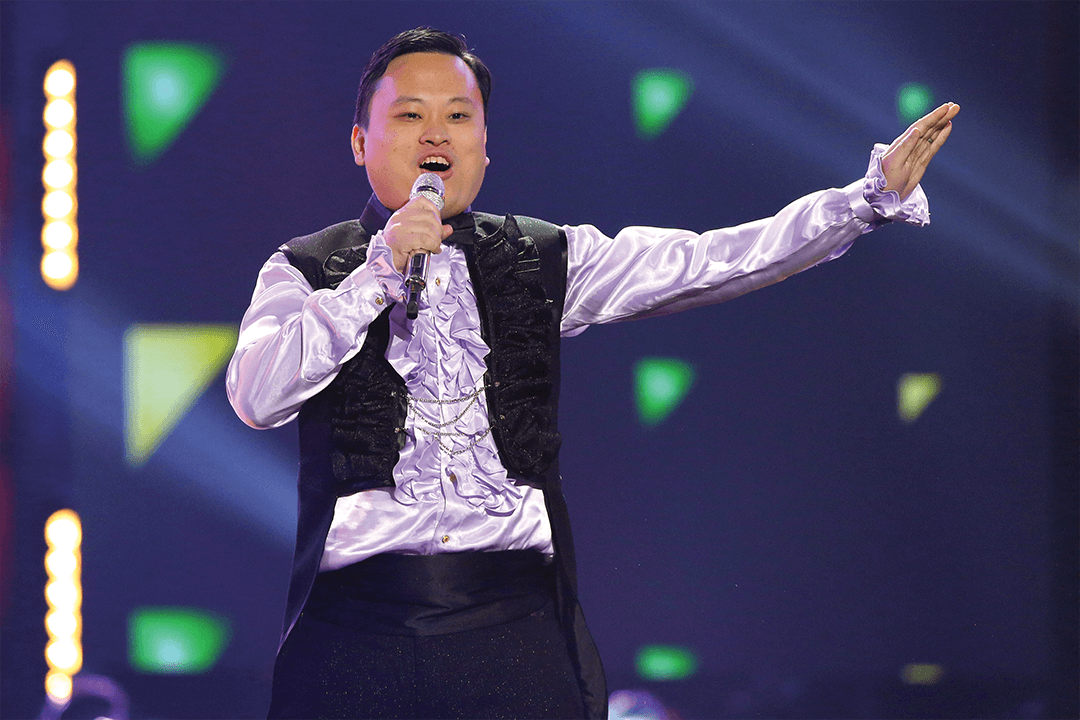 William Hung performs at the American Idol series finale at the Dolby Theater in Hollywood, California, on April 7, 2016. Photo by Matt Sayles/Invision/AP

Let’s revisit the scene—the one that launched the strange saga of William Hung, pop-culture celebrity. It’s September 2003 in San Francisco, California. Hung, a 20-year-old civil engineering student at the University of California, Berkeley, is one of 3,000 people auditioning for American Idol, the TV talent show where would-be popular musicians try their luck at stardom.

Hung stands in front of the three celebrity judges, including the notoriously cantankerous Briton, Simon Cowell. The smiling young man belts out an enthusiastic version of the Ricky Martin hit song “She Bangs.” He bombs. His singing is, um … off-key. His wild dance moves show spirit, but not style. Cowell cuts the ­number short and doesn’t mince words: “You can’t sing, you can’t dance, so what do you want me to say?”

When the audition airs on TV in January 2004, Hung’s singing and dancing become the object of public ridicule. Video of the audition goes viral, and his performance becomes a cultural punch line.

But Hung, ACG, ALB, has the last laugh. The Southern California resident, a Toastmaster for the past six years, capitalized on the onslaught of attention, negative or not. He embraced the surge of media coverage, and his good-natured attitude about the Idol audition endeared him to many. Hung even earned a recording contract out of the whole experience.

“I felt I had a choice in my life,” he says of his sudden notoriety. “I could live my life with courage, or live my life in fear and hope people would forget about me. … Hiding in fear? What a terrible way to live!”

On a recent evening, Hung sat in a small Chinese restaurant in a Southern California strip mall and discussed his unusual journey. The affable 35-year-old is now an administrative assistant for the Los Angeles County Department of Public Health. He says he wants to be a ­motiva­tional speaker, using his own story to inspire others about risk-taking and ­overcoming obstacles in life.

“We can choose to take the high road—we can be positive despite negative things happening around us,” says Hung, who spoke at a TEDx event in Watts, California, in June 2018.

He is a member of the Los Angeles County Metropolitan Transportation ­Authority (LACMTA) Speak Easy Toastmasters. Mayra Puchalski, the club’s 2017–2018 president, says Hung is a bright presence in the group. “He’s made a lot of improvements in his public speaking,” she notes. “He shares a lot of really good tips too. He’s always interested in helping others. William brings a lot of energy to the club.”

Daniel Midson-Short, a Southern California Toastmaster and three-time competitor in the International Speech Contest Semifinals, met Hung six years ago and has connected with him at various Toastmasters events. He says he admires Hung’s perseverance and positive attitude. “It’s so awesome to see someone so resilient in the face of setbacks, and willing to put [himself] out there,” says Midson-Short.

Hung was born in Hong Kong and immigrated to California with his family at age 10. He says he decided to try out for American Idol after winning a college talent show singing—yep—Ricky Martin’s “She Bangs.” Martin, a Puerto Rican singer, had a big hit in 2000 with the up-tempo, salsa-inspired tune.

The failed audition itself didn’t really faze him, Hung says. But his life was turned upside down four months later, when the audition aired on TV. That very night, he recalls, one newscaster said, “William Hung is the worst singer ever.” Then came the flood of derisive comments on the internet. 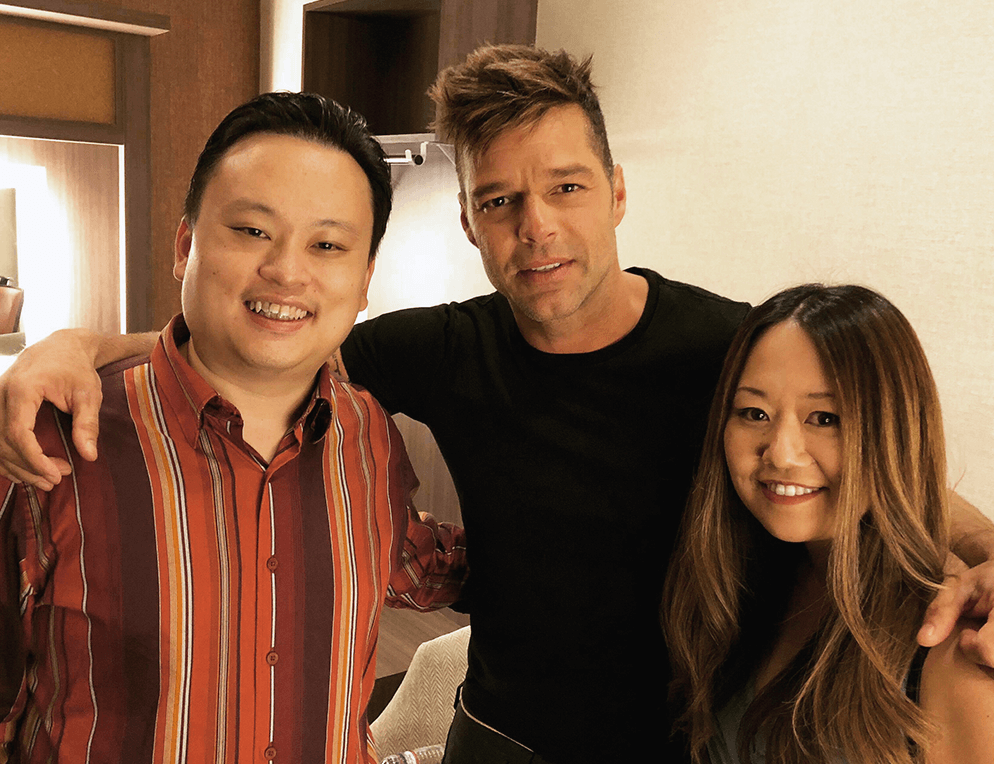 The criticism stung at first, admits Hung. But he was also getting requests to appear on TV, and his friends urged him to take advantage of the exposure. “One of those friends told me, ‘You’re only going to get this opportunity once in your lifetime, so why not go for it? Why not make the most of it?’ And I agreed with him.”

Hung appeared on a number of TV programs, including The Ellen DeGeneres Show (on which he sang another Ricky Martin tune, “Shake Your Bon-Bon”). Riding the wave of publicity, an independent label offered him a recording deal. “Can you believe it?” he says with a laugh.

Things got even stranger. Hung made three albums for Koch Records—the first of which sold more than 200,000 copies. A fan started a William Hung website. Hung quit school and performed around the world.

Hung’s 15 minutes of fame had stretched into several years. But eventually it waned, and he went back to school, studied math and became a statistical analyst for the Los Angeles Sheriff’s Department.

Joining Toastmasters provided a professional boost, he says, pointing to one experience in particular. Hung had to give a technical presentation at work about software programs, and he was dreading it. He practiced the speech for his club and received great suggestions on how to make it engaging.

When he finally gave the speech to his work colleagues, they loved it, says Hung. “My supervisor gave me a written recommendation based on my presentation. I still have it. That was a big accomplishment.”

One aspect of the William Hung story has a more complicated side to it. As Hung emerged on the public stage, some Asian-Americans felt pained by his celebrity. They said his humorous image and notoriety evoked negative stereotypes of Asian people.

“You can’t sing, you can’t dance, so what do you want me to say?

One person who had a problem with it was fellow Toastmaster—and now good friend—Emi Fukuoka. They met as members of the National Association of Asian American Professionals club (NAAAP) of Orange County (California). When Hung’s “She Bangs” routine provoked laughter, “that was tough to see,” she recalls. She says she was frustrated when he built a career off it.

“I actually had an honest discussion with him the very first time I met him,” says Fukuoka. “I told him, ‘I didn’t like you, because you were perpetuating Asian stereotypes.’” They eventually talked through the issue, with both coming to respect the other’s perspective. Hung says he never meant any harm; he was just being himself. But he also says he now understands the concerns expressed by fellow Asian-Americans.

Fukuoka, the club’s 2017–2018 president, says she has come to know Hung well and to see his genuine personality. “William is just having fun. That, I think, is why people embrace him. He’s just different and unique—there’s nobody else like him.”

Fukuoka was with Hung recently when his American Idol journey came full circle. On June 2 of this year, he was invited to perform onstage with Ricky Martin in Las Vegas. For the first time, the two men sang “She Bangs” together.

The experience, says Hung, “felt like a dream come true!”

The video above is an Interview of William Hung by World Champion of Public Speaking 2016 Darren Tay. You can find this video and more on Darren Tay’s YouTube channel.