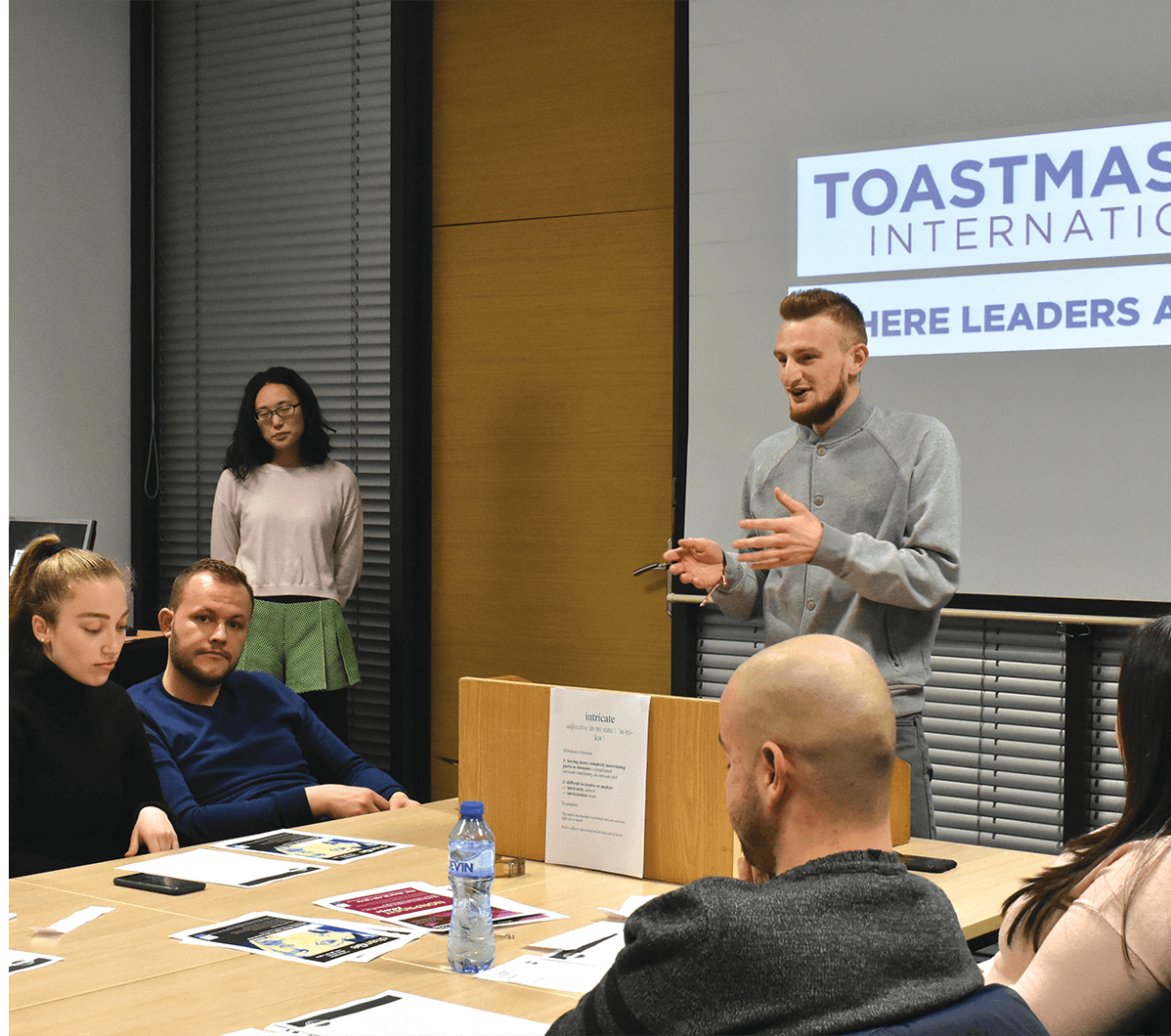 It was a few weeks before our flight back to the United States after teaching in Bulgaria for a semester. My partner and new-club co-sponsor, Jesse Scinto, was playing saxophone with a group of musicians at the Delta Blues Bar, a tiny music hall in the capital city Sofia, filled with attentive listeners in a memorabilia-studded room. One of our members, club president Stoil Pramatarov, had come to listen. As if responding to a high-pitched cue only Toastmasters can hear, Jelio Dandanov, a member of Sofia Toastmasters, coincidentally stopped by.

In the midst of music and good vibes, Stoil and Jelio hit it off, and Jelio agreed to co-sponsor the club with Boyan Kelchev. We were happy to have secured continued support for the students we had grown to care for and respect.

The first time we met Jelio, CC, CL, and Boyan, CC, was when they and five other members of Sofia Toastmasters and Toastmasters Business Park carpooled 65 miles from Sofia to the American University in Bulgaria’s southwestern campus in Blagoevgrad one wintry night. They drove down the A3, a modern roadway that slices through the nation’s beautiful, undeveloped countryside. After securing university seed funding to launch the club, Jesse and I planned a demonstration meeting. This exercise requires the participation of experienced members, but Bulgaria has only three clubs. I contacted the groups via their e-forms on toastmasters.org, and Sofia Toastmaster Diyana Yosifova floored me with enthusiasm: “Excited by your message, love your initiative, and would very much like to join. Please, let us know what roles you still have unassigned; we’d be happy to contribute as much as we can.”

It all began when Jesse, a frequent contributor to the Toastmaster magazine, was awarded a teaching fellowship at the American University in Bulgaria (AUBG). I submitted a resume after learning I could be an instructor too. My Toastmasters experience caught the attention of Dean of Faculty Robert White, who was a member in his native New Zealand during college. White credits Toastmasters with providing him an opportunity not only to develop public speaking and leadership skills but also to cultivate his capacity to run a well-structured meeting. He wanted to give the university community in Bulgaria the same opportunity he had.

“This was something that students needed, but in the past they didn’t know they were lacking it or how to address it,” White said. “I was hopeful that the students would come along; I just wasn’t expecting the reaction to be so positive and for people to be so excited by it.”

Given my own Toastmasters experience in the U.S., I wasn’t worried about launching a club when planning for the semester abroad. I’d have the organization’s straightforward materials, Jesse’s help and Toastmasters World Headquarters’ support. But what seemed easy from a distance proved to be formidable. 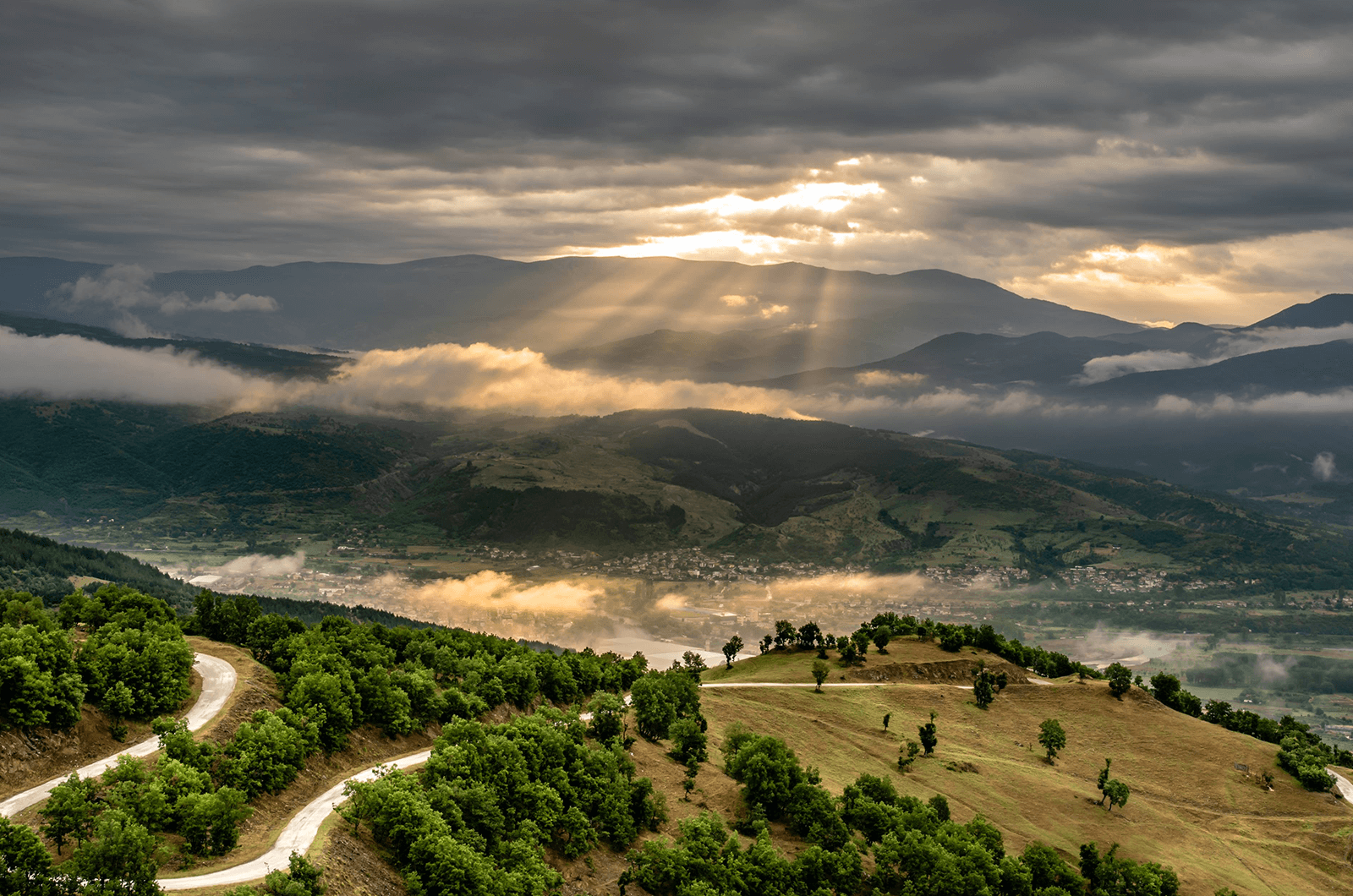 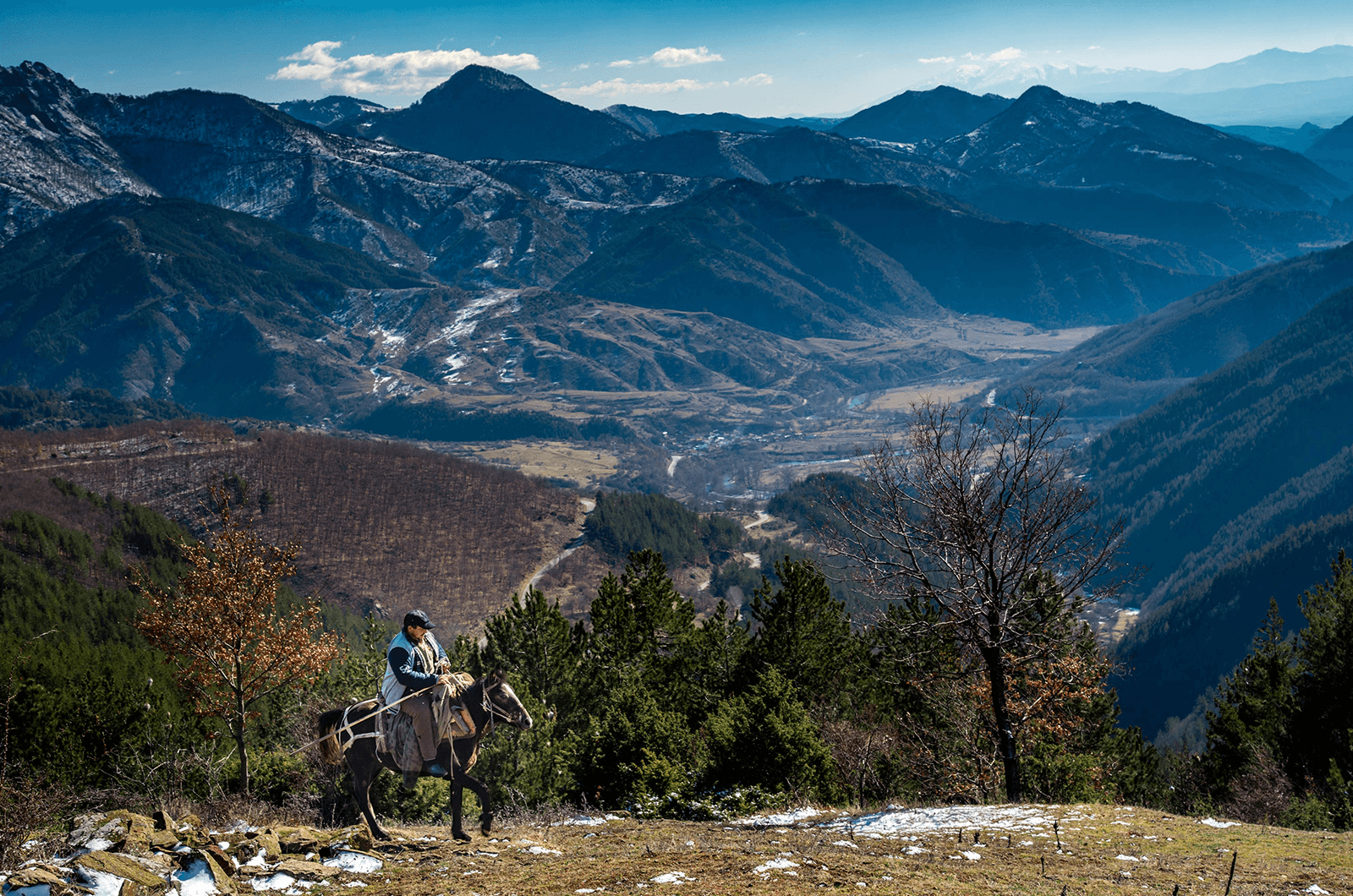 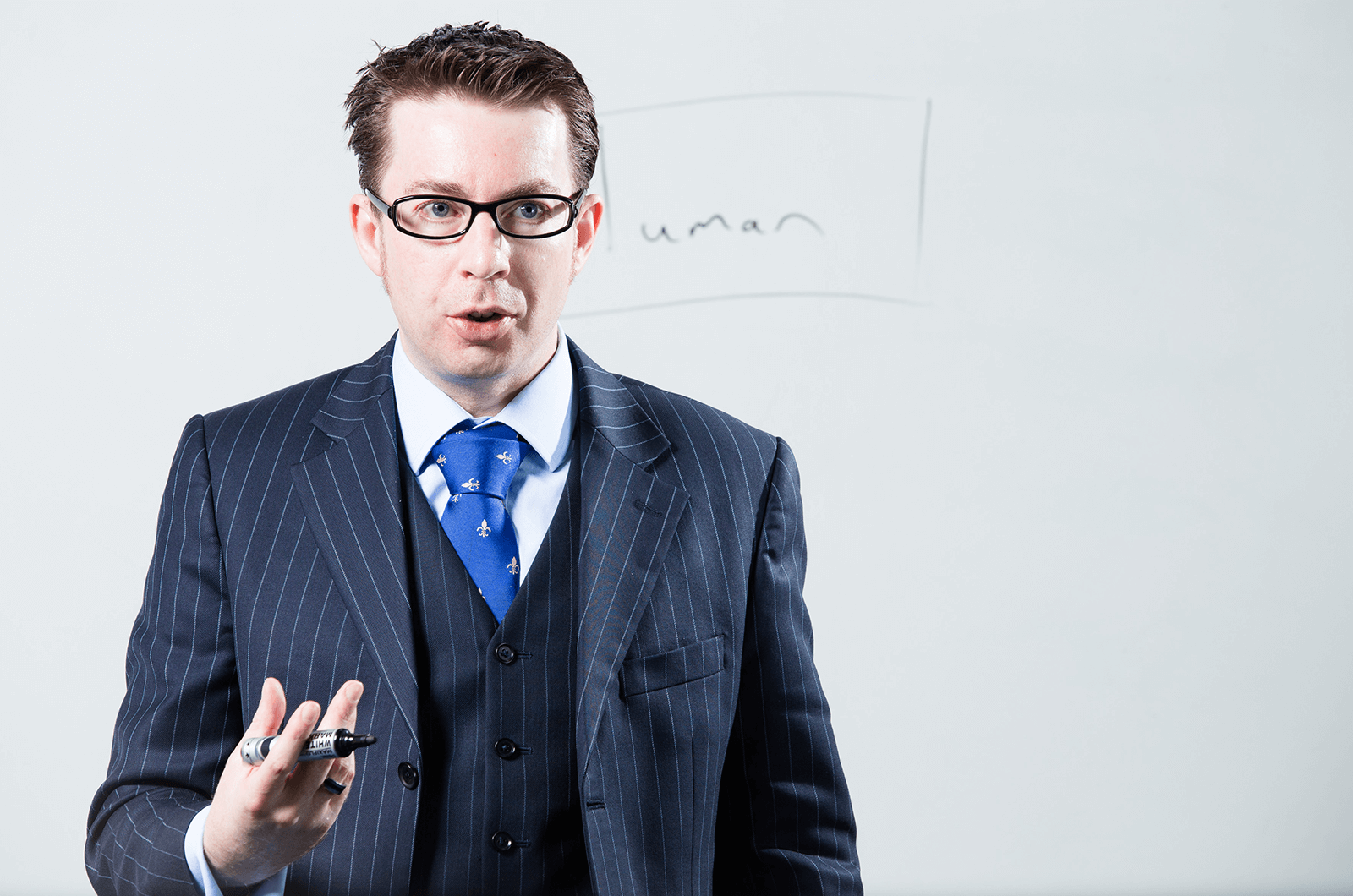 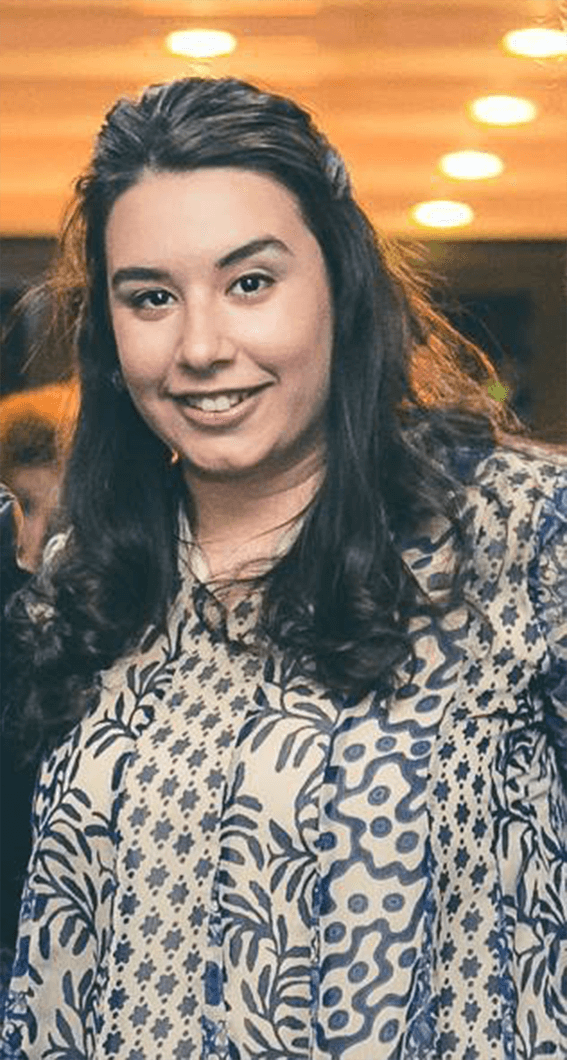 Money was the first hurdle for us in the European Union’s poorest country. The cost of dues was a stretch for many Bulgarian students, not to mention for those from other countries, like Albania. Add to that the challenge of attracting students to a virtually unknown organization in the middle of the year, after other groups in the university’s vibrant extracurricular scene—including the Broadway Performance Club and Model United Nations—had already been established.

We used every available channel to promote the demonstration meeting. With the support of our collaborators from Sofia, the event went well. Toastmasters International’s global standards translated into a shared understanding of how to run the meeting.

“We didn’t have to think about how we should organize the meeting in order for things to be well done,” recalls Stoil, who became the club’s president. “It was easy to follow. The only thing we had to focus on was improving.”

Nine hands went up when Jesse requested help establishing AUBG’s club at the end of the demonstration meeting. The students also surprised us during an organizing meeting a few days later. I suggested holding a meeting the following week; they wanted to start immediately. I explained the option of meeting every other week; they wanted to meet every week. I offered names; they invented Toastmasters@AUBG. They snapped up officer positions; when two people wanted the same post, they decided without prompting that the upperclassman had dibs.

Although university staff attended the demonstration meeting, only students joined the club, due in part to our decision to hold evening meetings after struggling to find a day and hour agreeable to members in different academic pursuits and schedules. Over the next few months we met Thursdays while continuing to recruit members with a sustained marketing blitz—via email, social media, the campus radio station, CC-TV screens and posters around campus.

Each session had at least one Ice Breaker, and role recruitment went swiftly. Jesse and I split the Toastmaster and General Evaluator duties. But we stepped aside when students began volunteering for those positions.

“If you join you should really take roles,” says new club member Viktor Domme, an exchange student from Bavaria, Germany, who came to study in Bulgaria for the school year. “If you just sit, you can see how other people speak, you can see other people be evaluated. But you need the experience; that’s way better than just sitting.”

A warm, collaborative spirit prevailed in the weekly officer meetings. I led the discussions but soon realized the club president could do the job. Still, it took time to recruit 20 members. We prevailed, chartering in April.

Toastmasters@AUBG was faring well. But Jesse and I were going home in June. A university club deals with attrition like any other, in addition to regularly losing graduates and exchange students. New students roll in every year, but they often hail from areas of the world with scant awareness of Toastmasters. Further, though club membership offers many rewards, the taint of serious effort can make it a tough sell.

We identified AUBG staff and faculty who would provide occasional support. But I worried about the club’s sustainability without the support of co-sponsors who would attend every session—both the ­officer and the regular meetings.

“One of the best things for me as a learner was to receive constructive criticism from seasoned Toastmasters,” notes Stefan Solarski, a Macedonian math major and the club’s vice president membership. “When I received positive comments, it gave me a boost of motivation and confidence. Toastmasters allowed me to take the responsibility of helping to lead a club and provided a new type of informal education that the university didn’t offer before.”

I wanted the students to continue having ready access to an experienced member—which is when serendipity intervened and Jelio entered the Delta Blues Bar.

At the final Toastmasters@AUBG meeting, we had Table Topics, unprepared speeches and food. The students went out of their way to ensure I finally tried lutenitsa, a local tomato spread, and ­surprised us with gifts.

During our five months in Bulgaria, we got to work with students to co-create a university club. It was a privilege and a memory I will not soon forget.