In the late 1960s, U.S. prisoners of war in a North Vietnamese prison camp met secretly for heartfelt communion through the spoken word. 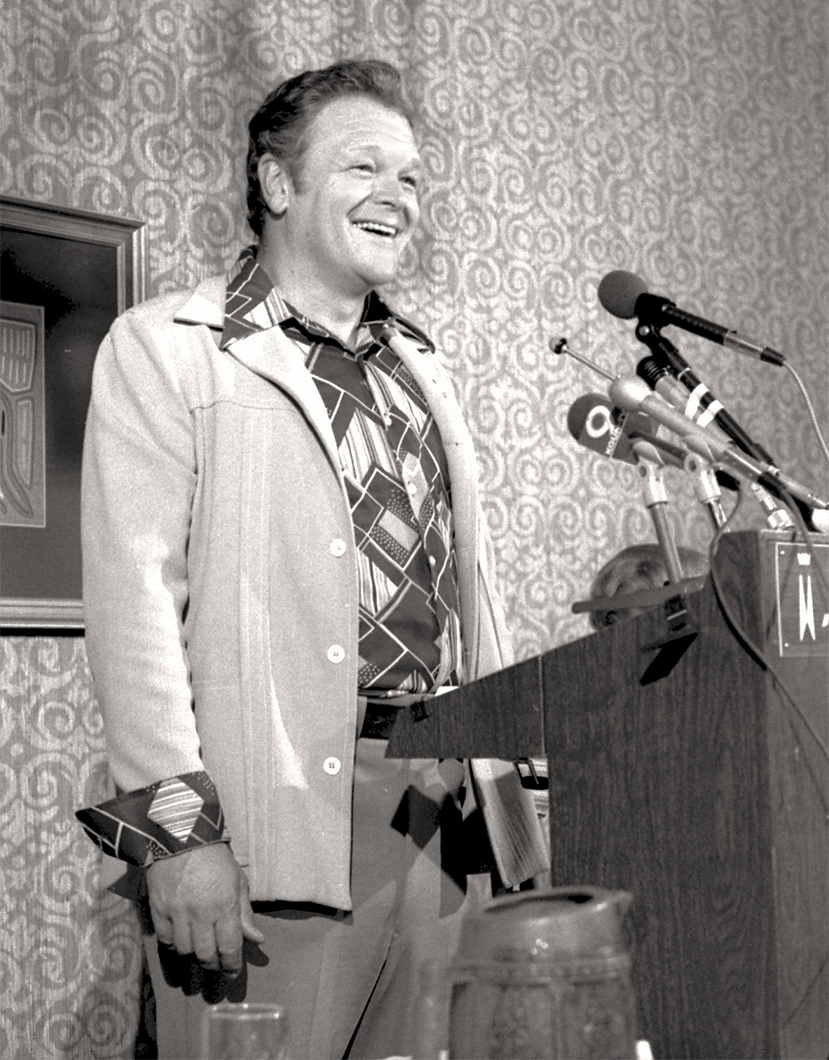 The late Laird Guttersen, who helped organize the Hanoi Hilton Toastmasters during the Vietnam War, speaks at a Tucson, Arizona, hotel in 1976. Guttersen eventually became a longtime member of a Toastmasters club in Tucson.

Ten men dressed in blackened underwear and drenched in sweat took turns giving speeches. They weren’t merely members of Toastmasters. They were also U.S. prisoners of war in a North Vietnamese prison camp. It was the late ’60s. Many of them were fresh from months in solitary confinement.

“Comments are kept to a minimum in solitary,” cracks Laird Guttersen, a retired colonel in the Air Force, who lived through five years as a prisoner of war (POW). Just 18 when he joined the U.S. Army Air Corps, he was 42 when a Chinese Mig-21 fighter jet fired a heat-seeking missile and shot down his plane.

Guttersen and a friend surreptitiously organized Toastmasters activities in a communal cell within the Hoa Lo prison—or, as it was sarcastically called by the POWs there, the “Hanoi Hilton.” Guttersen’s group called themselves the Hanoi Hilton Toastmasters club. (After the war, the club was granted a charter membership by Toastmasters International.) The activities were aimed at helping the men rebuild their dignity. They spoke to feel themselves alive, to activate the elegance and nobility of the human spirit under impossible circumstances.

They used bamboo strips to design pens. Diarrhea pills and cigarette ashes to make ink. Toilet paper to write up the lesson plans and list of officers. When the guards became suspicious and rationed out smaller and smaller portions of toilet paper, they made paper out of a bread and water paste.

“One time after an interrogation, the guards stripped me down and found three bottles of ink, half a dozen pens and pencils,” says Guttersen. “Bits and pieces of anything loose I could steal. Because we didn’t have anything, it was important to be a kleptomaniac.”

The prisoners of war spoke to feel themselves alive, to activate the elegance and nobility of the human spirit under impossible circumstances.

The men created a time-keeping pendulum out of string and stone. Unfortunately, the swing of the pendulum frequently hypnotized the timekeeper. “It was a thankless job,” quips Guttersen, who first discovered Toastmasters while working as an Air Force recruiter in New Orleans, Louisiana.

In a prison raid one day, the North Vietnamese seized the sheets of paper listing the club officers’ names, dragged the officers out and tortured them.

Unlike their lives in the States, though, they didn’t have to juggle meetings in between frantic schedules, jobs and love lives. Instead, they met secretly in between sessions of the “rope trick,” a torture devised—at the very least—to dislocate shoulders. Screaming through the eyeballs was a more common form of expression than language.

“By forgiving Big Ug, there’s no way he could destroy me.”

During one particularly despairing session of the rope trick, Guttersen’s nose stopped inches away from the blood- and mud-smeared wall when he saw the words, “Keep the faith, baby,” scratched into it in tiny letters.

A meeting of the Hanoi Hilton Toastmasters was much like suddenly feeling the impact of those four words in the midst of terror. Heartfelt communion through the spoken word was a delicacy, a medium of deep healing, far more satisfying than tapping and sweeping out codes.

And it brought them closer to their primary mission—to learn how to express themselves clearly so they would be able to translate their nearly untranslatable experiences to the general public and their loved ones when they finally returned home.

Guttersen recalls, “One speaker could barely put a sentence together. He stumbled and stammered, but by the time he did 10 speeches, he was lucid, fluent and coherent, if not brilliant.”

Lucid, fluent, coherent and free. These Toastmasters didn’t stop speaking once they were released during the Paris Peace Accords. Much to the chagrin of a three-starred general, Guttersen used his powerful voice to speak out for those left behind, becoming the godfather of the POW/MIA movement. Today he notes, “I have the sense that if I’m going to get up and give a speech, somebody needs to hear what I have to say.”


The Power of Forgiveness

When he talks about his five years in a prison camp, Guttersen speaks not to sensationalize the torture in an “I Fought 1,000 Snakes in Hanoi” tabloid fashion, but to show the power of forgiveness. After endless months knotted in a constant web of anger, fear and hatred, Guttersen knew that if he were to survive, he had to learn how to feel even the smallest spark of love again. Daily, he began summoning the image of his young daughter throwing her arms around his neck and saying, “I love you, daddy.” That vision alone flooded him with waves of unconditional love.

Eventually, he began superimposing this love symbol on the guards, especially “Big Ug,” who’d been particularly savage with him. Twice a day for three years, he practiced this vision of love until he actually began to feel sorry for his captors. “By forgiving Big Ug, there’s no way he could destroy me. I couldn’t hurt myself or my loved ones over him.”

Guttersen has shared this tale over and over again. A man walked up to him out of the blue one day and said, “You don’t know this, but I heard you speak for an hour two years ago. I had decided to commit suicide that night, and your talk changed my mind.”

As Guttersen says, “With your increased skills of communication in Toastmasters, you know you can influence people. You just never know whether you’ll influence one person or a thousand people. You may change the course of history without ever knowing you’ve done it.”

At least 10 men can testify to that.

Editor’s Note: This is a condensed version of an article that originally ran in the October 1999 issue of the Toastmaster magazine.

Jan Henrikson is an author in Tucson, Arizona.

After his 1973 release as a U.S. prisoner of war in North Vietnam, Laird Guttersen remained deeply involved with Toastmasters until the final years of his life. The longtime Tucson, Arizona, resident, who helped organize a secret Toastmasters club in the infamous Hanoi Hilton, was a member of several clubs. He earned a DTM, competed in speech contests, served as a contest judge and attended district conferences.

Guttersen was a member of the Northwest Casas Adobes club in Tucson from 1990—when the club started—to 2005.
He died the following year, at 80.

Judith Norris, DTM, was a fellow member in Northwest Casas Adobes for many years. She still has a vivid mental picture of Guttersen delivering his speeches.

“He was very eloquent, and he was—because of his manner and his military presence and his way of handling himself, physically even—very impressive,” Norris says of the retired Air Force colonel.

“With what he had to say and how he went about saying it,” she adds, “he was someone you always wanted to listen to.”

Guttersen’s Toastmasters experience served him well. He gave speeches to local and U.S. audiences about his experiences as an American POW, and he was an outspoken advocate for military families whose loved ones were prisoners of war or missing in action. Guttersen gave frequent media interviews as well. He also ran for political office, losing a 1976 bid for the U.S. House of Representatives.

In their Toastmasters club, Guttersen rarely spoke about his war experiences, says Norris. But she does remember one club meeting when he did. The club president at the time had asked him to speak about his time as a POW. Specifically, says Norris, he wanted Guttersen to explain “how you deal with that kind of pain and agony, and to answer the question of how people manage to get through something so unbelievably horrible and still come out the other end.”

The club president set aside the entire meeting for Guttersen’s speech. As Norris remembers it, the former fighter pilot spoke, without notes, for the better part of an hour. He talked about the torture he endured but also about how, ultimately, he had to mentally forgive his captors in order to survive the psychological trauma.

“It was very, very powerful,” says Norris, still a member of the Northwest Casas Adobes club. “As you can tell, it’s something I have never forgotten.”

Less than six months after Guttersen’s release in 1973, the Hanoi Hilton Toastmasters received a charter membership from Toastmasters International. In 1986, Toastmasters presented a copy of that charter to Col. Ben Pollard, who had participated in the Hanoi Hilton club as a POW. John Stark, DTM, the District 5 governor at the time, and Herb Nowlin, DTM, then a member of Toastmasters’ Board of Directors, gave it to Pollard at a District 5 Conference. Both Stark and Nowlin are Vietnam War veterans.

“Colonel Pollard was visibly moved by the surprise charter presentation and so was his wife Joan,” recalls Stark, who also awarded Pollard the district’s Communication and Leadership Award.

Nowlin, a longtime Toastmaster, was a reconnaissance pilot in the war. He says the Hanoi Hilton club is a dramatic testament to the power of Toastmasters even in its most primitive form. “Toastmasters was an important function in their lives. They went to a lot of trouble to do it—if they got caught, they got tortured.”

Norris, too, says she’s amazed and inspired by how POWs like Laird Guttersen created a Toastmasters club in the darkest of places—and drew comfort from it.


Eileen Hope, DTM, a past District 5 governor, contributed to this article.

Paul Sterman, is senior editor, executive and editorial content, for Toastmasters International. Reach him at psterman@toastmasters.org.