Sarah Khan, CC, spent the last few weeks of 2017 on a whirlwind speaking tour in the Middle East. A Toastmaster and professional speaker from Southern California, she gave keynotes and workshops in Bahrain and Dubai to Toastmasters and non-members alike on the topics of communication skills and her own journey overcoming social anxiety. One of her presentations was a two-hour talk titled “The Making of a Peace Monger.”

As part of her preparations, she learned about the interests of the local community and any particularly sensitive subjects to avoid. She was advised to avoid the topic of mental illness, told that even though discussion of it is much needed there, it’s a taboo subject. Instead of avoiding it, she says she did the opposite. “As I always do, I chose that very subject [indicated as taboo] to create all my talks around.” Her “Peace Monger” speech, too, focused on just that taboo topic, but in Khan’s signature way of sharing “stories of mutual pain and suffering to try to create an atmosphere of empathy.”

In sharing her own personal experiences with overcoming severe social anxiety and agoraphobia, and stressing that mental illness is stigmatized in almost every society, Khan was able to connect with her all-female audience and offer meaningful connections to audience members who approached her afterward to learn more about therapeutic coping skills and how Khan had personally gained victory over deeply rooted fears. This is her story.

After the terrorist attacks on New York’s Twin Towers on September 11, 2001, Khan became the victim of racial slurs and personal attacks. A devout Muslim immigrant to the United States from Bombay, India, she says, “On 9/11, my faith became weaponized by the terrorists who had hijacked my religion, and by a media that fed on the storm of fear and revenge.”

As a recognizable Muslim due to her appearance, she felt labeled and ostracized by her American community. After experiencing violent threats against her and her two sons, she began to withdraw both physically and psychologically from the world. She developed social anxiety disorder and eventually confined herself to the four walls of her house.

She says, “Once you are labeled the ‘other,’ aspects of your identity are no longer welcome to others, so you become closed in. As an isolated mother of an infant and a toddler … I had to do something.”

"If we take a chance to get to know those we perceive as different from us, then the fear will leave the heart and make space for a personal relationship."

Medications alone didn’t help, and she encountered hurtful comments, even from those assigned to treat her. Finally, in the summer of 2011, she was admitted to a one-month intensive anxiety treatment program at Linden Oaks Behavioral Health in Chicago. At the end of one session, her therapist offered to hug her. Khan says that simple act helped her realize the power of empathy. “What if I could find the aspects that make us who we are—our need for love, connection and support—in other people who were not like me?”

When she returned to her home in Los Angeles, she joined Toastmasters on the recommendation of a therapist friend who said it was a safe place to practice exposure exercises. She worried about being labeled and judged in a negative light. But to her delight, “my club gave me nothing but unconditional love and support.” She soon was comfortable speaking to a room full of people—a far cry from her early days in therapy when she would get so anxious that she couldn’t even remember her own name to introduce herself.

Less than six years later, Khan has left her fears behind and embraced her calling. A member of Madera Toastmasters club in Simi Valley, California, she now mentors others who have stage fright. She tells them she was once more terrified than they could imagine. “You see, in Toastmasters meetings we share our stories—unique, authentic and deeply vulnerable stories—and discover that our hopes, dreams and fears are not so different from each other’s.”

Khan now projects a confident and stylish presence in her role as a professional diversity and interfaith speaker. She also wants to help others, such as the women in the audiences of her recent Middle East speaking tour, who wanted to know about overcoming anxiety.

"What’s unique about Sarah is that first and foremost, she speaks from her heart. That’s where her authenticity comes through."

“Empathy is courageous,” she tells her listeners with a wide smile and much conviction. “Taking a step to stand in someone else’s shoes, or seeing through someone else’s eyes, enables us to feel with the heart of another. This in turn helps broaden perspectives, so there is tolerance and respect towards the otherness of others.”

She mentions her first Toastmasters mentor, who is Jewish, and became a close friend. “We had a great mentor and mentee relationship, and we started sharing stories about our struggles and about our very real and present differences. I wept for ­Palestine; she, for Israel. … Eventually we realized, all this time we had been feeling the same hopes, fears and dreams.”

It is that shared humanity, the mutual respect and understanding, that Khan sees as the solution for peace and cross-cultural communication. She wants to get people to appreciate that inside we are all the same. “If we take a chance to get to know those we perceive as different from us, then the fear will leave the heart and make space for a personal relationship.” 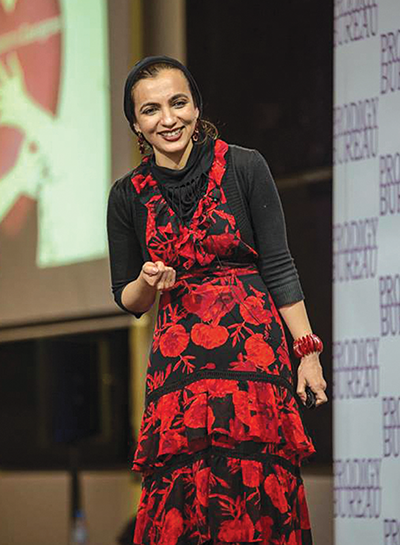 In 2012, only a year after joining Toastmasters, Khan became California’s District 52 International Speech Contest champion. And thanks to her tribe of supportive mentors, she was able to take on her biggest exposure exercise—speaking before 500 people at the 2012 International Semifinals in Florida, where she placed third in her semifinal group.

She calls her Toastmasters club her “home away from home,” and appreciates all the learning opportunities. She credits Toastmasters “for the love, support and encouragement I received from such a diverse group of people. Without them, I wouldn’t be able to share my message.”

Her friends and mentors comment on Khan’s authenticity and drive to perfect her presentations. Her longtime friend, Mitch Krayton, DTM, of Denver, Colorado, met her in 2011 when Khan was a new Toastmaster. He says, “Most people who say they want to speak professionally, they speak from the head. What’s unique about Sarah is that first and foremost, she speaks from her heart. That’s where her authenticity comes through.”

In fact, Krayton, who is Jewish, was invited by Khan to a community event in a mosque where he conducted a workshop on public speaking, calling it “one of the best experiences in my Toastmasters life.”

"Curiosity toward other people is the first step toward developing empathy."

Andrew Chiu, DTM, of Redondo Beach, California, is another mentor whom Khan sought out for advice on sustaining eye contact and connecting with an audience through humor. “She has an insatiable appetite to become better, in seeking influences. Sarah is very funny, very quick-witted,” he says. “She wants to educate the heart of her audience through humor and personal stories. She is proud of her heritage, but she is not a label. She proudly wears her hijab, but she is not her hijab.”

Khan shares her story, such as in her 2017 TEDx Talk in Camarillo, California, by inserting humor to offset any questions audiences may have about her appearance. In that talk, she wore an abaya, a traditional Muslim overgarment, joking that, “No, I’m not a Ninja; I just dress like one.” She also made a joke about how she used to love wearing a dark cloak because she could get away with wearing “hot pink pajamas and bunny slippers underneath and no one would ever know.” 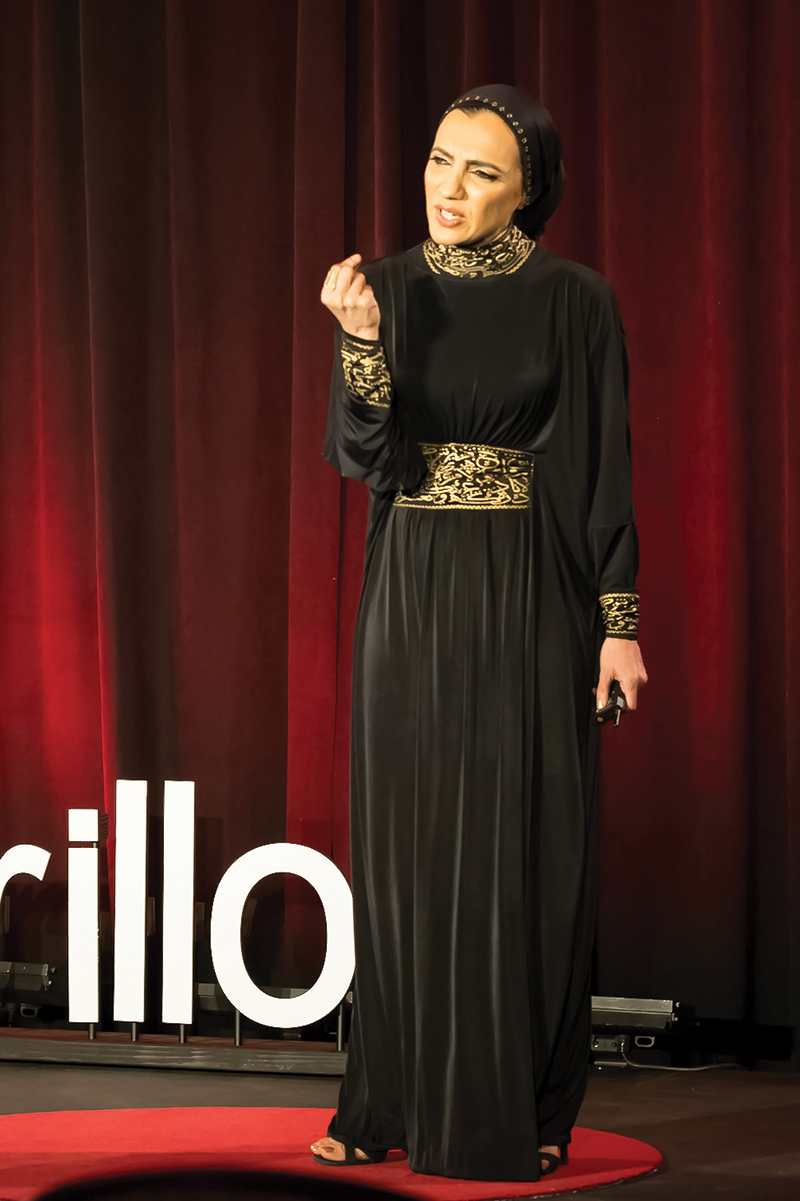 Sarah Khan speaks at TEDx Camarillo in 2017 on the topic “I Dare You.”

Khan eventually switched from abayas to more colorful and intricate gowns but still covers her hair with the traditional hijab. “People always ask me, ‘You look so pretty in your hijab. What does it mean, what does it represent to you?’” she says. “Believe it or not, I’m a feminist. And I choose modesty not only in deference to my religion, but because I believe that modesty doesn’t veil your beauty, it reveals personal liberty.”

Khan’s story of overcoming fear and severe anxiety to become a globe-trotting professional speaker would not be possible without therapy and the community of support she has in Toast­masters. Once a victim of prejudice and fearful of venturing outside her own house, she now confidently travels the globe with her message of empathy, making points with humor and charisma and paying it forward by mentoring others.

What’s her best advice for those wanting to be better understood, and to better understand others who have different ideologies, perspectives and opinions? Khan doesn’t hesitate: “Watch and wonder. Because curiosity toward other people is the first step toward developing empathy.”

1. Engage to broaden perspectives. Every communication, whether it be public or interpersonal, is an opportunity for everyone to expand their views.

2. Consider that your reality comprises all your perspectives, emotions and motivations.  Your reality forms your truth, and your truth is yours, and yours alone.

3. Let go of the belief: For me to be right, I must prove you wrong. Anyone’s truth is as self-evident to them as yours is to you.

4. Win hearts, not arguments. Don’t get into arguments about who is more right. When you play the “right vs. right” game, you lose the opportunity to bridge differences.

5. Use the ”yes, and” approach to address disagreements by acknowledging a person’s opinion first, then stating your own. The more respect you show to others, the more likely they will be receptive to your views.

6. Share your struggles to sell your successes. The only difference between a success story and a crisis story is the ending.

It’s not about what you say, but about who you are. Inspiration and influence begins with what you believe.

8. Remember, it’s not about you.  The most influential and impactful people are those who focus on serving others.

9. Soften the sharp edge of truth with self-deprecating humor.  Laughter makes us listen.