Funny You Should Say That
March 2018

I’ve always wondered what it’s like to have millions of dollars. Now I know. 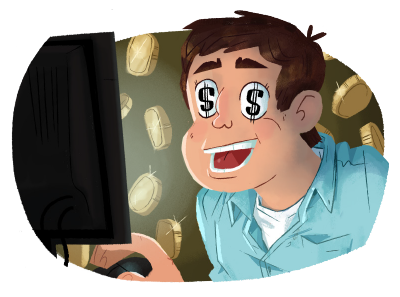 You’re not going to believe this. I can hardly believe it myself. I’m going to be rich! Me, the guy with the 2008 Nissan Sentra. Rich! Miracles abound.

Just imagine this: I get an email this morning from “Rev. Mark James” with a subject line that reads “Director of Western Union, Diamond Bank, Porto-Novo, Benin.” Whoa! What’s this all about? I’ll tell you what: “I am writing to inform you that your funds are in our custody and it is 4,700,000 U.S. dollars. We, the Western Union, under the operation of Diamond Bank, Porto-Novo, Benin, are ready to start sending these funds to you. And you will be receiving 10,000 twice every day until your 4,700,000 is completely sent to you.”

I know what you’re thinking: This is a scam. No way. I checked. Benin is a real country in West Africa, Diamond Bank really is in Porto-Novo, and the email is from a member of the clergy. Criminals run scams, not reverends. Plus, they’re not asking for any money. All they want is my name, address, phone number, occupation, sex, age, passport ID and driver’s license. That is not a lot of information. And in return I become a multi-millionaire! I don’t know how I have all that money, but this is not the time to be asking questions.

Then I get another email from Benin—so I know this place is for real—especially since now they’re trying to protect me from a scam: “This is to inform you that the American Embassy office Benin Republic was instructed to transfer your fund totaled 985,000 U.S. dollars compensating all the scam victims and your email was found as one of the victims by the American security leading team and America’s representative officers here in Benin Republic.” I know—the grammar is a little suspicious. But he’s a financial guy. Is your accountant a poet? What I do understand is 985,000, and the fact that they’re being nice enough to keep my first 6,000 payment on hold until I send them 59 plus my bank routing number, birth certificate and Social Security number so they can verify who I am. Obviously, these people want to make certain I don’t get scammed again.

“I don’t know how I have all that money, but this is not the time to be asking questions.”

So here I am, 15 minutes into my morning and I’m already up 47,985,000. But wait! What’s this? Another email—from the “Co-Chief Operating Officer of Bank of America.” Bank of America? Don’t tell me that’s not legit. They even had a meeting about me: “After a brief meeting on 13th of this Monday we deem it appropriate to intimate you that your funds will be transferred into the bank account given by the Government of Benin Republic as the Country Originator of this Fund if you failed to send the required fee. The actual transfer of your funds to the bank account given by the Government of Benin comes up next 3 days because Government of Benin Republic has agreed to pay any fees regards to this transaction.”

OK, this one needs a little parsing but I think I understand—although my calendar doesn’t have a “13th of this Monday.” Maybe it’s a Benin thing. And I’m not sure what “intimate you” means. I mean, I don’t even know these people. But that’s nitpicking. The bottom line is there’s 20.5 million smackers waiting for me if I pay a fee within the next three days, or else the Government of Benin gets my money. What’s up with that? In the last two emails they were giving me money. But it’s all good because the email says the fee is only 250 (reduced from 600!) and once they get it I can start withdrawing my money the same day. Take that, MasterCard® Outstanding Balance!

Sounds too good to be true? Well, just remember—not only is this from THE Bank of America but they’ve absolutely assured me: “This transaction is being monitored by the united state government in order to guard against internet impostors.” You can’t get much safer than that.