The technological revolution has connected us around the world, but at what cost? 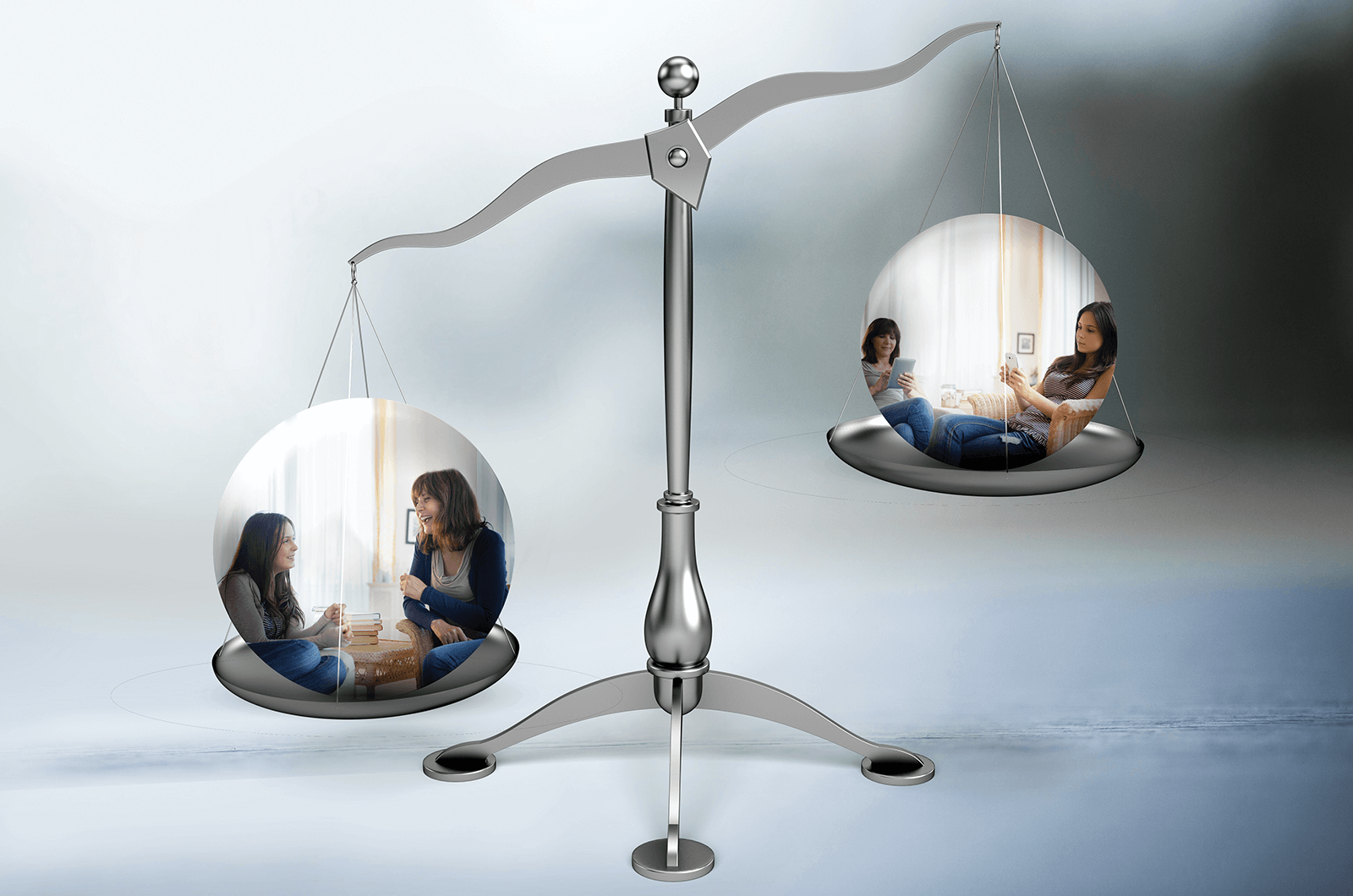 Galya Westler is a social media expert who has spoken and written about the dangers of digital dependence, warning of how spending too much time connected to our smartphones and the online world can often lead to psychological and medical maladies. But Westler also is a hard-working CEO who runs Plazus Technologies in Vancouver, a position that demands she spend large amounts of time on her phone communicating with clients or employees working remotely from other countries.

That irony isn’t lost on Westler and illustrates the struggle many of us face as we weigh the advantages of being tethered to our mobile devices against the costs of dependence and of damage to relationships with those around us. The scope of the challenge becomes apparent when someone as well-versed in the dangers of digital addiction as Westler wrestles with finding the proper balance between online and offline worlds.

“Because of the nature of my job I can get sucked into technology, and I have to discipline myself how and when to detach,” says Westler, ACB, a member of the Vancouver Entrepreneurs Toastmasters club. Westler now makes a point of shutting off her phone before work in the morning and again at night, replacing that screen time with tactics that help her slow down, refresh and connect in other ways with the offline world around her.

As people around the globe spend increasing amounts of time online, research has mounted demonstrating how too much “screen time” can threaten our psychological and ­physical well-being, as well as our relationships with others. Many of these studies also suggest that where we connect with one another and how long we spend online make all the difference.

More than half of the world’s population now uses the internet in some form. About a quarter of a billion new users came online for the first time in 2017, according to the 2018 Global Digital reports from the organization We Are Social. This trend was driven by more affordable smartphones and mobile data plans. The number of people using the top social media platform in their respective countries also has increased by almost 1 million new users each day (globally) over the past year, the Global Digital reports found.

There’s no denying the benefits the world has derived from the evolution of the internet and the advent of smartphones and tablets. People living in far corners of the globe now have access to research, educational resources, music, images, online communities and much more at the tap of an icon or swipe of a screen. Mobile devices allow us to text, email, Skype or FaceTime from anywhere at any time. The technological revolution clearly has delivered impressive benefits.

“The trick is to become more aware of when we’re overusing technology and find creative ways to escape from our screens, even for small moments.”

But that access has come with costs. Studies show growing problems with increased isolation, loneliness, depression and even dangerous detachment from reality resulting from the overuse or misuse of modern technologies. When people spend too much time online at the expense of connecting face-to-face with family, friends or work colleagues, a significant price is often paid, experts say.

One study recently published in the periodical Clinical Psychological Science found that between 2010 and 2015, 33 percent more teens in the United States reported feeling “useless and joyless” than in a previous study and that teen suicides rose by 31 percent in the same period. The study’s authors argued that this increase in depression is likely due in large part to the rising use of smartphones and the decrease in interpersonal connections.

Another recent study published in Emotion, a journal from the American Psychology Association (APA), found that teens who spent more than two hours per day interacting with their mobile devices were less happy on average than those who had more non-screen, face-to-face time with others.

“If we become too attached to our phones and the internet there also is a danger of losing the barrier between the virtual world and the real world,” Westler says. “Social networks allow people to create a stylized version of themselves in an effort to entertain others as well as themselves, but often at the cost of not being mindful and focused on their identities in real life.”


Moderation in Online Use is Key

As with many things in life, moderation in online use is key to achieving balance. The Emotion study discovered that teens with zero hours of screen time had higher rates of unhappiness than their peers who logged on a few hours a week. Other research has found that moderate use of social networks and online activity is not innately harmful and can even enhance social skills. In addition, individuals from often-marginalized groups like those identifying as LGBT can often find support in online communities in ways they can’t offline, experts say.


Westler says there is considerable value in putting down the phone and meeting face-to-face in business situations, as well as in our personal lives. In her business she employs developers in the Ukraine who work remotely, as well as employees who work on-site in her Vancouver office. Westler typically checks in every day with her remote staff via phone, text or email, but also strives to have face-to-face meetings weekly or monthly, either via Skype or in-person gatherings. “That’s important to build a sense of rapport, connection and teamwork,” Westler says. “We don’t have to abandon our smartphones, just learn how to use them more selectively. The more that people learn how to connect authentically with others offline, the less I find they need to use their phones.”

Ann Van Eron, Ph.D., founder and owner of Potentials, a global coaching and organization development consulting firm based in Chicago, says business leaders she consults with around the world constantly struggle with balancing the execution of work tasks and cultivating better relationships with their subordinates and peers.

“It’s easy to become a slave to your phone or email to the point where you become unbalanced in focusing on performing tasks over building relationships,” Van Eron says. “I work with executives to help them see the value in connecting with others in the workplace, which is still best accomplished through in-person meetings. There are a lot of meta-studies that show it’s that face-to-face interaction—where people feel listened to, connected and supported—that is the greatest source of human satisfaction.”


The Art of Connection 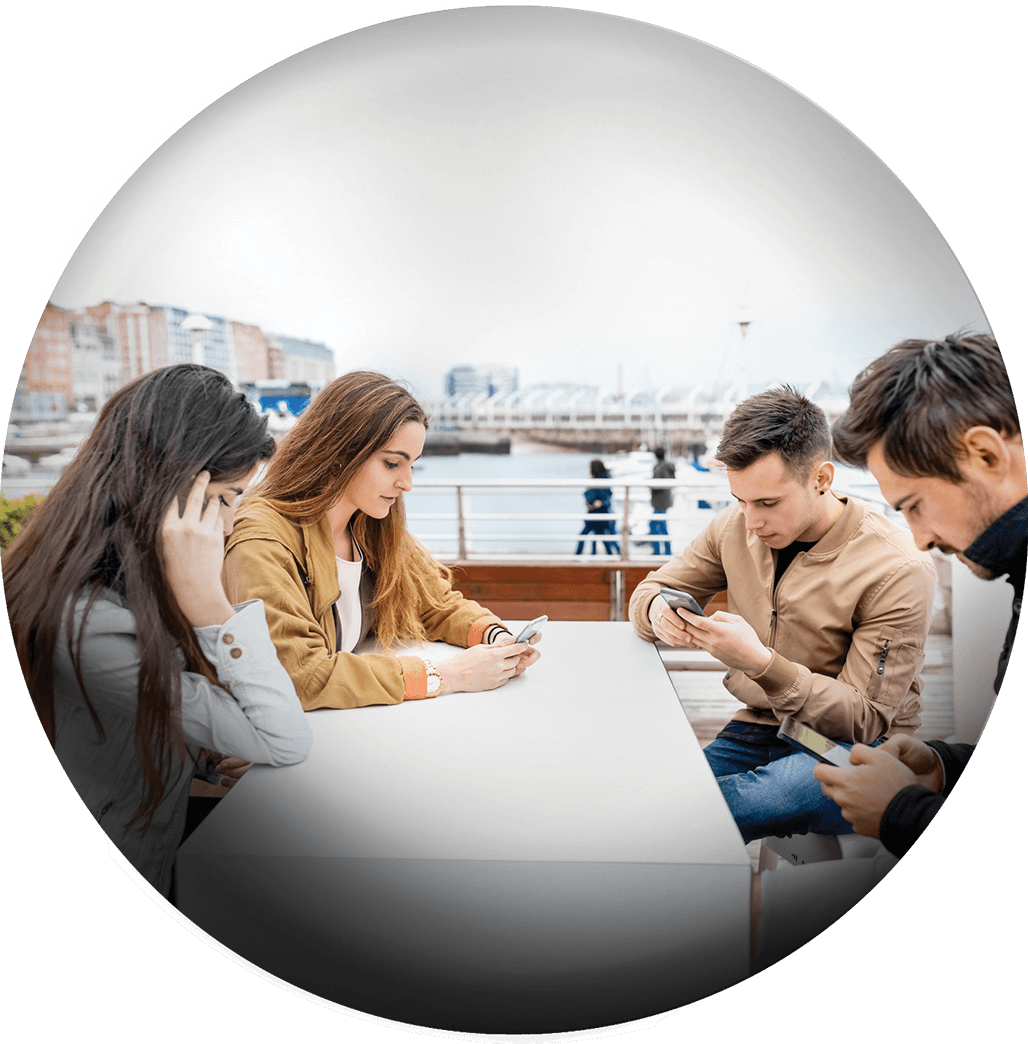 Developing rapport with others through in-person connections is not just a business tool to enhance productivity or client service, says Michael Gelb—a pioneer in the fields of executive coaching, creative thinking and innovative leadership—but an invaluable end in itself. “By connecting in a meaningful way with others, we broaden our own humanity as well as connect with a deeper part of ourselves,” Gelb says.

Gelb is author of the book The Art of Connection: 7 Relationship-Building Skills Every Leader Needs Now, which argues that in today’s world too many people find it easier to avoid face-to-face contact in favor of “technological shortcuts,” which keeps them from having meaningful relationships with others. 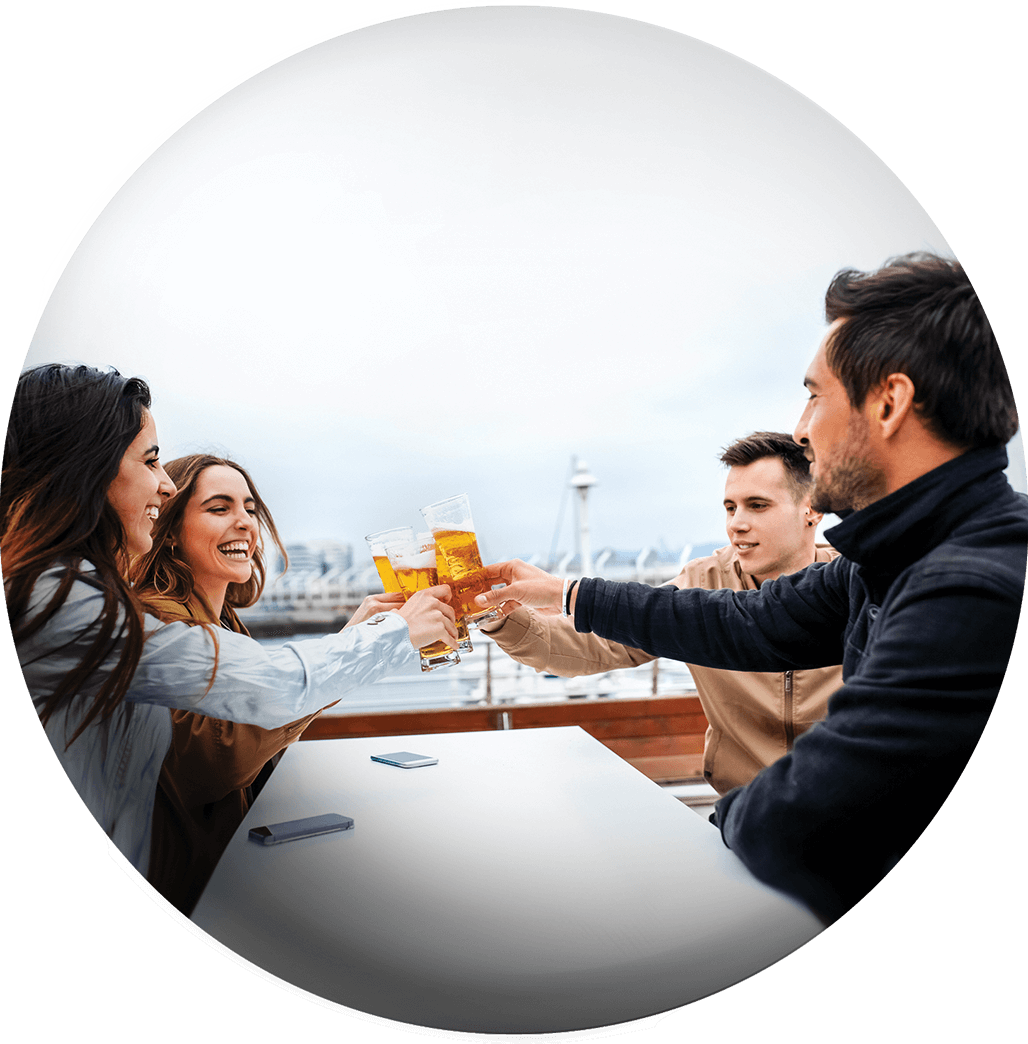 There is no shortage of disturbing images, hateful commentary, conspiracy theories and other negative influences online, Gelb says, and users need to be discerning in how they set their web or RSS feeds and in choosing what links they click on. Gelb has a chapter in his book about how emotions are contagious, stressing that people need to be careful what they “catch and spread,” both online and off.

“If you get caught up in a world of ugly imagery or hateful dialogue, it’s not going to help you catch and spread courage, joy, creativity or ­positivity, which are so vital in the world today,” he says.

There also are oft-overlooked physical costs to digital addiction, Gelb says, including maladies like “texting neck.” For his book, Gelb interviewed a leading spinal surgeon in New York who reported seeing an influx of new patients with neck-related issues. “These are the kind of problems that in the past he would only see in people in their 60s, 70s and 80s,” Gelb says. “But now there are teenagers and patients in their 20s coming in with the syndrome from being addicted to their devices.”

Being too digitally dependent also can have bottom-line consequences for businesses.

“People who have grown up tethered to their smartphones often find they don’t have the interpersonal skills to deal with clients or even coworkers,” he says. “They haven’t practiced these relationship skills, and they don’t come naturally in business settings.”

Gelb works with one business executive who has come to realize the power of making face-to-face connections. As the head of engineering for a large corporation, this leader often took clients out for expensive dinners to entertain them and thank them for their business. But one day he decided to change that approach.

“He now gives those clients an hour of his undivided attention over coffee, is fully present, doesn’t check his phone and really listens and reflects back what the clients say,” Gelb reports. “As a result, many of his clients now pay a premium to do business with him, because they aren’t the low-cost provider in their market. That level of attention and concern is something clients aren’t often getting from the company’s competitors.”

“We don’t have to abandon our smartphones, just learn how to use them more selectively.”

To better manage digital dependence, Gelb suggests turning off your phone and putting it away when you’re meeting with anyone one-on-one. In business meetings, ask that everyone both turn off and turn in their phones and place them out of sight for the duration of the meeting.

Another option is considering a “digital sunset,” a reasonable time when you turn off your phone or tablet every night and don’t turn it on again until morning. Or you can hold a digital “fast” once a week by disconnecting from your phone for an entire day; if that’s not realistic because of family or business responsibilities, turn it off for a few hours.

“It’s not easy to detach,” Gelb admits. “I personally need to check my phone regularly to stay in touch with clients. But if you can discipline yourself to do things like take a short walk in nature instead of playing with your phone for another 30 minutes, you’ll find it renewing and often energizing.”

It’s easy for even the most vigilant among us to become ­hostages to our phones or tablets in the rush of everyday business or when managing the responsibilities of our personal and family lives. The trick is to become more aware of when we’re overusing technology and find creative ways to escape from our screens, even for small moments. The result often will be better physical health, improved relationships with those around us and a greater sense of well-being.