A Love of Learning

Ever since he was a child, Laurel Hilbert has loved to read. He describes himself as intensely curious and finds answers to his many questions in books. Blind since birth, he learned to read Braille—in Arabic—by the time he was in the third grade.

When he came to the United States at 17, he learned English Braille. And now his passion for reading, researching and learning is stronger than ever.

“I have multiple ways to read,” Hilbert says. “Mostly, I download books from a website called Bookshare.org, which is supported by the U.S. Department of Education.”

When Hilbert was exploring forming a small business, he immersed himself in reading about various business issues and created detailed business plans. “I am very methodical, very detail-oriented, very research-oriented.” 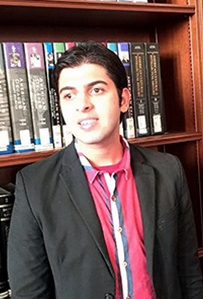 His inherent curiosity also contributes to his communication skills. He converses easily with people. Meeting strangers in places like on a train or at school, he asks questions and engages, genuinely interested in what they have to say. That has led to some fortuitous friendships with people who have been able to help him in critical ways.

The young man says he is determined to succeed in life, which is one reason he was so drawn to the Toastmasters club he originally joined when he first came to Los Angeles. “All of the members were professionals—CEOs, business owners, executives, managers in large global companies,” he says. “I really enjoyed being part of that club because I was among a professional community and making connections.”

People in Toastmasters are trying to improve themselves, which inspires him. Whether through speaking, reading or conversing with others, he plans to keep learning and pushing himself to succeed.