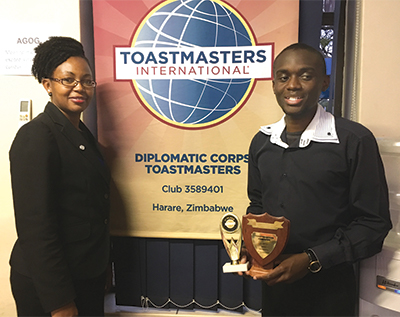 In 2014, Tendai David Muranganwa, CC, ALB, joined the same club, and also earned a degree in International Studies at Midlands State University, Zimbabwe. He was hired in 2015 as an administrative assistant but became visually impaired. During his rehabilitation, he focused on Toastmasters and became the club’s 2017-2018 vice president membership.

How did you find out about Toastmasters?

It was through my best friend, who is a member of Metropolitan Toastmasters club in Zimbabwe. I wanted to express my thoughts and ideas more clearly, so I joined.

When I met Zivai, I was shy and reserved, and lacked self-confidence. She saw past that, and because of her guidance, I became vice president public relations, for which I was recognized in 2015 as the Most Promising Toastmaster in Zimbabwe.

How would you describe Zivai?

She is committed and hard-working, and she always wears a smile, regardless of the circumstances. She encouraged me to continue my Toastmasters journey, despite the challenges I faced when I lost my eyesight. She even assisted me with transportation.

What was the highlight of her mentorship for you?

How do you apply what you’ve learned at Toastmasters?

I have developed strong interpersonal communication skills and can more effectively work as part of a team. I also teach others, including the youth in my church.

Why do you stay in Toastmasters?

Because of the supportive environment. I not only gained a mentor, but a motherly figure who teaches me life lessons by the example she sets.