Speaker travels the world to perfect her taste for chocolate. 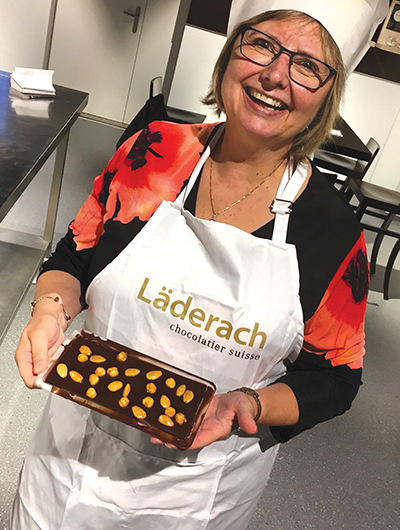 Pendgracs displays her handcrafted chocolate bar in the Läderach kitchen in Vevey, Switzerland.

OK, you say you love chocolate. (Who doesn’t?) But have you ever been slathered from head to toe in warm, gooey melted chocolate in a tropical spa? If that sounds like your type of experience, you might want to meet up with Doreen Pendgracs, DTM.

Pendgracs is a longtime travel and food writer, blogger and speaker, with an avid following. Among other topics, she talks about the world of chocolate, including the challenges of growing and harvesting cacao, and the sustainability of the crop. Her articles have appeared in a variety of publications, including National Geographic Traveler, The Costco Connection and Farmers’ Almanac.

Pendgracs, a member of the Toastmasters in the Arts club in Gimli, Manitoba, Canada, is also among the pioneers of a burgeoning form of eco-tourism: chocolate travel. Known affectionately among her fans as “Doreen the Chocolate Queen,” she calls her travel project Chocolatour—a play on “chocolatier,” one who makes confections from chocolate.

“My mission,” she says, “is to educate, entertain and inspire chocolate lovers to gain greater knowledge of the world of chocolate through travel.” The molten chocolate spa treatment, which Pendgracs has enjoyed in locales from Costa Rica to Switzerland, is one of many chocolate travel adventures she has chronicled on her website, and in interviews on Canadian TV and radio and other media outlets.

“Cacao has a natural chemical compound that releases serotonin and antioxidants and dopamine in your body, so you feel almost like you’re on a natural high,” she explained to one interviewer. “When you get the spa treatment, it gets absorbed into your body, and you feel euphoric. It’s amazing.”

This past June, she even took a bath in chocolate. That was at Hershey’s Chocolate World in Pennsylvania. When Pendgracs says on her website that she’s “immersed in a world of chocolate tasting, events and tours,” she’s not kidding.

“I’ve had quite a few chocolate body wraps, massages, pedicures, facials. But I had never had a chocolate bath,” she notes.


The Start of Something Sweet

Pendgracs’ professional interest in chocolate took root about eight years ago, when she traveled to the Dominican Republic on vacation. She and her traveling companions visited a cacao farm, and the experience captivated her. Pendgracs vividly recalls seeing a cacao pod being cut open and looking at the “luscious seeds” inside. The images, she told an interviewer on a Canadian radio program earlier this year, “somehow lodged themselves in my mind.”

Eventually she decided to make writing about her chocolate travels her professional focus. Indeed, she told the same interviewer, the pursuit “has literally taken over my life.”

Along with the lavish experiences she’s enjoyed, she has also had her share of less luxurious chocolate adventures: Pendgracs has stayed in a hut in Peru with no electricity and ridden a mule across rocky terrain in the Dominican Republic. Her focus is on small organic growers and artisanal chocolate makers, not big companies like Hershey’s, although she points out that the U.S.-based chocolate giant now does make a few products in the artisanal vein that’s she’s fond of.

“My mission is to ­educate, entertain and inspire chocolate lovers to gain greater knowledge of the world of chocolate through travel.”

“I’m trying to promote healthy, sustainable chocolate that’s grown in tropical countries, where either the chocolate makers are sourcing the beans directly from the farmers, or where the cocoa growers themselves are actually making chocolate.” She has participated in the harvesting of cocoa in Ecuador and Peru and was also asked to judge at a chocolate festival in Puerto Viejo, Costa Rica.

Her book Chocolatour: A Quest for the World’s Best Chocolate, which won a bronze medal in the 2014 Readers’ Favorite International Book Awards, tells of many of the small chocolate makers she has visited, from Europe to the equator. She’s working on sequel volumes.

Come February 2018, just in time for Valentine’s Day, she will be jetting to Hawaii for Chocolatour’s first official group tour. She’s doing it in conjunction with Toronto-based Go Ahead Tours.

Pendgracs describes the itinerary: “Hawaii has everything a tourist could want, plus they grow wonderful-tasting cacao there. Our tour will have visits to cocoa farms, as well as a visit to a coffee plantation. We will have a sacred cacao ceremony. And we’ll visit several chocolate shops, and have some of the best chocolate in the world. To me, this is the ultimate chocolate tour.”

Sorry, dear reader, but it’s already too late to book a spot—although she notes she would have loved to have been joined by Toastmasters from around the world. She urges those interested in such adventures to sign up on her website for notices about other future tours.

One consolation to missing Pendgracs’ Hawaii trip is you’ll be able to read about it afterward on her blog—and experience it, to a degree. A talented writer and photographer, she creates vivid accounts of her travels, rich in colorful descriptions and images, and chockful of interesting facts. Her posts typically generate dozens of enthusiastic comments from followers, and her goal is to respond personally to each one.

Here’s a sampling of comments she received on posts about her travels in picturesque New Brunswick, Canada:

“I very much enjoy your writing. The colors, flavors and personalities of the places you visit really shine through.”

Regarding Pendgracs write-up about Switzerland that included a lavish description of a spa treatment she received there, one follower wryly commented:

“Your chocolate massage sounds amazing, although I think I prefer to take my chocolate via my mouth.”

And then there are comments like these, from readers who appreciate the big picture of Pendgracs’ pursuits: “Traveling the world and eating chocolate? Life goals! What a fun niche,” and, “Such fascinating work you do, and all the great people you get to meet!”

When Pendgracs was interviewed for this story, she had just received a box from an Oregon-based company that pairs products from small-batch coffee roasters and artisan chocolate-makers. “The box includes three different single-origin chocolate bars, and three different packages of coffee,” Pendgracs said about the package of goodies she was about to explore. “The idea is to try the chocolate with each of the different coffees, and find the perfect match.”

It’s a tough job, but someone has to do it.

A Club for Art Lovers

A Club for Art Lovers

Among other benefits, Doreen Pendgracs credits Toastmasters for helping her acquire the presentation skills she now uses in speaking gigs across North America. On the way to earning her Distinguished Toastmaster designation, she founded a new club. She worked a year to recruit 20 members, and the Toastmasters in the Arts club, based in Gimli, Manitoba, received its charter from Toastmasters International in September 2013.

The club is geared to artists and art lovers. “Most of the members of our club are involved in some kind of creative endeavor, or they are art enthusiasts,” says Pendgracs. During the summer, the group meets in a museum and art center where all the walls are adorned with artwork. “It’s an artistically exciting venue to be in,” she says.

She explains why she targeted the arts community. “Many people involved with artistic endeavors are introverts. They are shy when it comes to speaking in public. I thought if I could encourage them to join Toastmasters, they could talk about their work, and their passion for art, to groups, whether it’s at a book launch or art show or whatever.”

Pendgracs says her club has two founding principles: creativity and fun. “We try to make every meeting fun, and we try to focus on creativity in some way.”