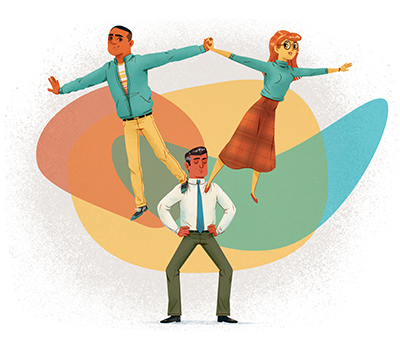 
Novice members focus on learning the club culture and completing the ­Competent Communication (CC) and Competent Leadership (CL) manuals. New members have the fastest improvement, which increases energy—theirs and the club’s. They are typically the best source for recruiting potential members because they haven’t been pestering friends and co-workers about Toastmasters for years. If a club doesn’t have enough novices, it isn’t meeting Distinguished Club Program goals 7 and 8 and likely lacks energy, enthusiasm and recruitment of new members.


Current club officers own the current success of the club. They must “walk the talk” by earning education awards. They improve their communication skills by giving speeches inside and outside of Toastmasters that matter (something’s at stake). They improve their leadership skills by serving as club officers, using tools such as the Toastmasters ­Successful Club Series. They typically mentor novice members.

By the way, when I ­analyzed my district’s member retention numbers I found that those who earned a Competent Leader award were more likely to stay in Toastmasters. Retention of those with a CL was 10 percentage points higher than those without. These are the people who have found that Toastmasters is about more than just talking.


Seasoned members own the long-term success of the club. They hold institutional memory and can fill club offices in emergencies. They typically mentor current club officers. It is often hard for them to recruit friends and co-workers because they’ve already pursued them as potential members. Seasoned members need new challenges such as finishing DTM awards and joining advanced or specialty clubs. Their mentors may be people outside their clubs, unless the mentor is some young novice teaching them about internet marketing or video communication. If a club doesn’t have sufficient seasoned members, there is inadequate long-term vision and support, although mentors for new clubs and club coaches for existing clubs can temporarily substitute for seasoned members.

Steve Piet, DTM, PDD, ScD is a member of four clubs in Idaho and one club in Utah.