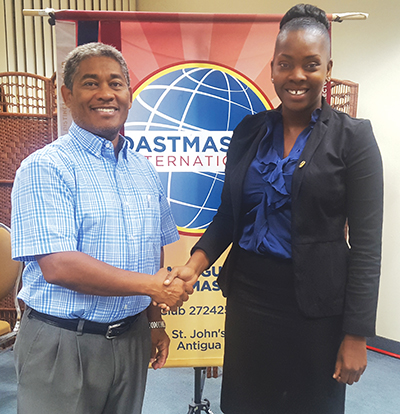 Mark Young first heard about Toastmasters growing up in Belize. His first Toastmasters experience wasn’t until July 2012, however, when he visited the Tortola Toastmasters club while on a work assignment in the British Virgin Islands. This inspired Mark to form the Antigua Toastmasters club in St. John’s, in the country of Antigua and Barbuda, where he now resides. When Cherry-Ann Casimir joined the club, Mark took her under his wing.

A self-proclaimed introvert, Cherry-Ann used to pretend to be busy to avoid being called on to speak in the club, but Mark soon put an end to that. She says Mark asks questions before giving her mentoring advice. The questioning, she says, led her to take a course of action she otherwise wouldn’t—to learn by doing.


What is it like to have Mark as your mentor?

Mark is assertive, friendly and always willing to share his knowledge. He also listens well. When I ask him, “What do you think I should do?,” his responses prompt me to think. He is instrumental in my personal and professional development. He admonishes me to be bold and courageous, and to soar with excellence.

What is your goal in Toastmasters?

I didn’t want to keep hiding and always be the last to speak up. At first, I just listened during meetings. And then I started participating more in the program, and that bolstered my confidence. It made me courageous enough to participate in speech contests, and I toasted my way to victory in the 2015 District 81 Speech Evaluation Contest.

What else has Mark helped you with?