In Toastmasters we learn and practice the art of capturing—and keeping—our audience’s attention when we speak. Our communication and leadership skills improve, and we develop better relationships with co-workers, clients, family, friends and neighbors.

But sometimes the unexpected occurs. Bonds that form between club members can last a lifetime—and romance, or even marriage, can ensue. Here are the stories of a few couples who met and fell in love in Toastmasters. 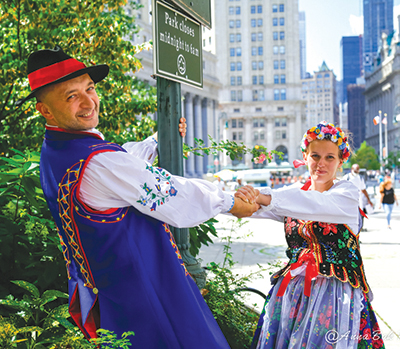 In December 2011, while former Area Governor Hadrian Lutogniewski, ACG, ALB, was commuting between Munich, Berlin, and Wrocław, Poland, for his employer in Wrocław, Marzena Augustyn, CC, ALB, was busy organizing a flash mob in Kraków, Poland. A member of the Toastmasters Kraków club, her goal was to promote Toastmasters in the community and attract new club members.

Hadrian, a member of two clubs in Poland, heard about it and flew in from Berlin, Germany, to join the event. He met Marzena and noticed how “her smile, softness and stubbornness merged into the very able leader that she is.” It was love at first sight, as that day they began their life together.

In August 2016, on their way to the International Convention in Washington, D.C., the busy couple stopped in New York City to be married.

A financial adviser, Marzena delivered the couple’s first child, Mosi, in 2014, just three months prior to hosting almost 500 members from 24 countries for three days as the main organizer at her district’s conference. And, as a former division governor, Marzena served one third of Poland’s Toastmasters members, but now she will devote time to raising the couple’s two children, one of whom began visiting clubs at 2 months old and has already attended two International Conventions: in Kuala Lumpur and Washington, D.C. Due to the international approach to life that Marzena and Hadrian enjoy, they moved their young family to Munich, Germany, to enable their children to grow up in a country with a language different from their own.


The first person François-Xavier saw at top of the stairs was Gabriel, the sergeant at arms who assigned him to a young member, Sarah Drolet, CC, who would explain to him the nuts and bolts of a Toastmasters meeting. “Sarah had a few years of experience under her belt, considering Charlesbourg was her second club,” François-Xavier says. “She easily answered all my questions throughout the evening.”

Being a nurse, Sarah was forced to skip some meetings while François-Xavier attended every one. And then, in mid-February, to celebrate St. Valentine’s Day, when most of the club roles were assigned to member duos, both Sarah and François-Xavier volunteered for the Topicsmaster role. Although the event went well, again, there were no apparent sparks between the two. But they did decide that night to commute to club meetings together.

In May, the young engineer gave his third speech, on how to select a bicycle. After hearing the speech, Sarah asked François-Xavier to help her resolve her bike’s recurring flat tire issue. They met at François-Xavier’s apartment and he taught Sarah how to perform the repair herself. Realizing that she had left her bike’s reflector at François-Xavier’s home, Sarah went back the following week to retrieve it. “That July evening turned into a date that coincided with Quebéc City’s foundation celebrations,” François-Xavier says. “After an impressive outdoor show and fireworks, we toured the old city. It was only as the birds began to sing that I left Sarah on her porch.”

A few years later, on September 10, 2016, the two celebrated their wedding on the nearby Island of Orleans, François-Xavier’s hometown. 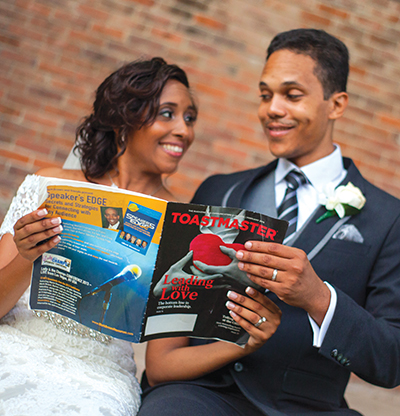 Jessica Lawrence and Vance Johnson
Vance Johnson describes his first meeting with Jessica Lawrence, the woman he later married, this way: “It wasn’t love at first sight when we met 13 years ago,” he says. “We attended the same Bible study sessions in Jamaica and were introduced by a mutual friend. Our interactions were always brief.” Jessica describes Vance as an introvert who didn’t talk much. She calls herself an extrovert, “outgoing and always in the company of others.”


Jessica and Vance parted ways to pursue postgraduate degrees: Vance at The University of the West Indies in Trinidad and Tobago, and Jessica at Dartmouth College in Hanover, New Hampshire, in the United States. But Vance’s feelings for Jessica changed when he returned home after graduation.

So how does a quiet guy get the attention of the woman he admires? Jessica wasn’t aware of Vance’s feelings, so the solution for Vance was to become a Toastmaster.

Vance had learned that Jessica was a member of the Nova Powerspeakers club in Kingston. He developed a plan to connect with her at the club, but when he showed up, Jessica wasn’t there. “It was the first time I attended a Toastmasters meeting. I was asked to participate in Table Topics and I handled the question as best as I could,” Vance says.

Vance showed up on another night and this time Jessica was there. Ironically, now it was Jessica who was called for Table Topics. “I was asked to describe my perfect guy,” she says. Hearing her reply bolstered Vance’s confidence to approach her—he believed that he could meet her expectations. Vance joined the club and eventually made his intentions clear. “He told me that he was interested in courting me,” Jessica says, adding that she was shocked and in disbelief. “After he explained all the effort he made to reach out to me, I decided to give the possibility of our relationship a chance.” Their courtship culminated in marriage in January 2016.

Vance summed it up: “Not only did Toastmasters help me to connect with Jessica, it also helped me develop my public speaking, interpersonal and leadership skills. I am often asked to make presentations to clients, and these skills are very useful to me as a part-time lecturer at The University of the West Indies,” he says. “Toastmasters got me out of my shell.” 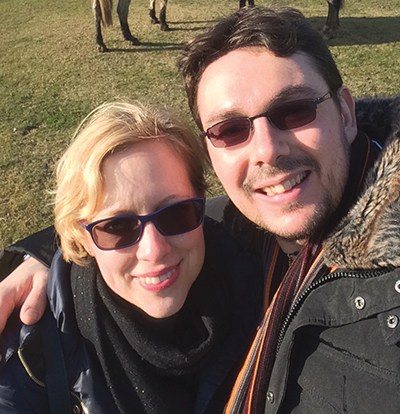 Andrea Darabos and Maurizio Paolella
Maurizio Paolella’s life took a new turn early in 2015, after he accepted an invitation to attend a club meeting. After seeing the potential of improved public speaking skills, he joined PMI UK Toastmasters in London.


Maurizio is from Naples, Italy, where he attended school and earned an engineering degree.When an opportunity arose to serve as a vice president for a global advisory company, he accepted the offer and moved to the United Kingdom. Andrea Darabos, from Hungary, had moved to the U.K. a few months earlier, and the two met when Andrea joined the PMI UK club. Maurizio fell in love with Andrea’s Ice Breaker speech. “I was fascinated by learning about all the experiences she has had,” he says. “It was such an amazing opportunity to know so much about her in a bit more than five minutes!”

Andrea earned an MBA in Singapore, and worked in other countries, including China and Canada. She settled in the U.K. and started a digital business-transformations and change-management company. She joined Toastmasters because of a recommendation and sponsorship from London’s Project Management Institute, which sponsors the club.

“We believe that Toastmasters gave us a community in which to grow—a welcoming network of friends, and skills way beyond professional use.”

Andrea says it was Maurizio’s welcoming attitude toward new club members that immediately attracted her. “But the real spark for me,” Andrea says, “was one of Maurizio’s humorous talks. He was myth-busting some typical Italian stereotypes [including heavy gesturing], but when he spoke, he unconsciously gestured himself.”

Wanting to keep the communication going, Maurizio visited Andrea at her business in downtown London. “I found a good excuse: to understand more about her business.” After Andrea showed Maurizio around, they took a walk to St. Paul’s Cathedral. “We went to a restaurant,” Maurizio says, “where Andrea told me the full story of her travels around the world.”

Today, the couple continues to work together on their communication skills. Maurizio says they both speak English pretty well, but have fun learning each other’s languages.

Andrea says, “As a mixed nationality couple, respect for cultural differences and good communication are essential. To ask for and give proactive feedback are Toastmaster skills that are hugely helpful in our relationship, and in everyday life. We both believe that Toastmasters gave us a community in which to grow—a welcoming network of friends, and skills way beyond professional use. We are eternally thankful!”

Maurizio says, “I found the love of my life at Toastmasters.
I will never forget what brought us together!”

From left: Tommy Navarro, Hector Mascorro, Jessie Chen and Miranda Chu and Miranda’s son Lucas Huang.
Jessie Chen, CC, CL, and Hector Mascorro, DTM, first met at work in the gymnasium at Southern California Edison Company in Rosemead, California. Jessie is from Taiwan and Hector from Mexico. “We had a rough start because we come from different backgrounds,” Hector says. “One of our biggest arguments was about which food is the better choice. Is it Chinese or Mexican?”


Jessie was doing commodity-trading presentations at work, and Hector recommended she join Toastmasters. Jessie joined his club, Edison Powerlines Toastmasters, in July 2013, and the couple kept their relationship quiet; only one person knew about it. “We acted professionally,” Hector says, although he admits to being known as the jokester of the club. Years passed, and Jessie eventually won the argument of which food is better. “I let her win,” Hector jokes.

The week before the marriage, Hector went to the couple’s Toastmasters meeting, although Jessie could not attend. It was only then that Hector told the club about the relationship. He said, “I have good news; I’m getting married next week.” A member replied, “Congratulations! Do you know our president, Jessie, is getting married next week too?” Hector replied, “Yes, I know, but do you know she is hosting her wedding at the same time and place as mine?” Another member suggested that he ask for a discount for having the two weddings at the same time. That got Hector laughing. “Ok guys, you don’t get it, I’m marrying Jessie!” he announced. That started everybody laughing, and one member even said, “Come on, I know you are a jokester, tell us the truth.” The club was shocked by how well the couple had kept their secret. “Tommy Navarro, a longtime Toastmaster,” Hector says, “was the one person who knew the secret, and he was my best man.”

March 2016 was a good month for Hector. “I celebrated my birthday, I found a job at the University of California at Los Angeles (UCLA), I was promoted in the California National Guard from captain to major and, the best of all, I married a wonderful person.”


Strong bonds often form when Toastmasters open their hearts and tell their stories. For these members, love blossomed and they reaped the unexpected benefits of membership. Who will be next?