Funny You Should Say That
December 2017 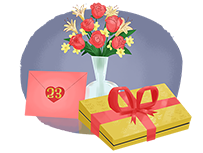 My anniversary is approaching and I want to write my wife a love letter. That should be easy. I’m a writer. Only it isn’t easy, because I’m also a man. As fluent as I can be on other matters, when it comes to expressing my deepest feelings I, like so many of my gender, turn into a functional illiterate. It’s not so much that I can’t find the words. I just can’t say them. When I want to tell my wife how much I love her I make the bed.

I know this is setting the bar pretty low, and anniversaries call for something more. I could buy her a card but, again, I’m a writer. Getting another writer to express my feelings would be like hiring a stand-in at my wedding to say all the gooey “to have and to hold” stuff and then stepping in at the end to tell my bride, “What he said.”

Thankfully, as the saying goes, when the student is ready, the teacher appears. For me, it came in the form of a short article in the New York Times Magazine titled “How to Write a Love Letter,” which reported on advice given by Sonia Cancian, a history professor at Zayed University in Dubai. What would a history professor know about love letters? I was afraid she would be harking back to the days when men really did express their feelings—I believe they were called “poets”—men like Shakespeare, who wrote the famous “Shall I compare thee to a summer’s day?” sonnet, or Lord Byron, who penned “She walks in beauty, like the night of cloudless climes and starry skies.” If that was the standard, I might as well just get the card, throw in some flowers and take my punishment like a man.

Luckily, it wasn’t. Ms. Cancian’s advice is far more prosaic, starting with time management. To write a love letter, she says, “you need a minimum of one hour.” That’s good to know because until now I’ve needed a minimum of forever. I’m sure Ms. Cancian has a decidedly shorter time frame in mind, but at least I know that if an hour’s hard labor produces nothing more than You’re a great wife, honey. No, really—you are. … I’ll have more time to dig a little deeper.

When a man hears the word “heart” he thinks not so much of his wife as his cardiologist.

Equally reassuring is my tutor’s revelation that I don’t have to be poetically gifted, as long as my missive is “heartfelt.” But then … that’s the problem, isn’t it? When a man hears the word “heart” he thinks not so much of his wife as his cardiologist. Ms. Cancian has a remedy for that, too. “If you feel stymied,” she says, you can “include shared cultural references to movies, song lyrics, or novels.” An interesting idea. How would I accomplish it?

—My Darling Wife, remember when we were watching The Godfather and ­Michael Corleone shoots the two guys in the head who tried to kill his father? I would do that for you. No, really—I would. Happy Anniversary.

What do you think? Too schmaltzy?

I can also “play with the notion of time”—i.e., the feeling that hours pass too quickly when lovers are together and too slowly when they’re apart. OK, how about this:

Another option is to write about celestial bodies, which, the article says, “can help create a sense of intimacy, as if by looking skyward you can be drawn closer together by your mutual smallness against the immensity of the galaxies.” She cautions, however, not to get too spacey: “You have to strike a balance between poetry and everyday life.” That’s a tough one but here goes:

—Dear Mrs. Wonderful, here we are, two infinitesimal specks of dust spinning around on an insignificant rock in an infinite, black void—and we still agree that when it’s time to paint the house again, we’re switching to aluminum siding.

I like that one. It’s got everything—heaven and earth combined. When my wife reads it she’ll have no choice but to conclude that her husband is a hopeless romantic.