Shine as an Area Director

Improve your skills while nurturing the clubs you serve.

I was a new area governor (now called area director), and “this” was visiting one of my area’s clubs. As the liaison between the club and the district, my job was to observe the meeting to see if they needed help with anything. That seemed intimidating to me, and I felt wholly unqualified, even though I had been a Toastmaster for five years and served as a club officer twice. I had even visited other clubs to practice some speeches before a contest. But this was scary. I felt the big fancy title outweighed the skills required for the job.

But the minute I walked into the meeting, my fears were vanquished. “Maureen! We’re so glad you’re here! It’s an honor!” The club members embraced me with enthusiasm, warmth and openness. I felt like royalty. Apparently, the area governor visit was a big deal to them. By the end of the visit, I had a roomful of new friends and the privilege of helping them brainstorm ways to improve their club culture.

“I learned how to set small goals to reach larger ones. It expanded my network and I made friends all over the world.”

That visit changed my perspective on the leadership path. I loved my year as area governor. In fact, other former area governors and directors would say the same thing: It’s the best role!


What Exactly Is an Area Director?

The area director is the first link in the district leadership chain. While members certainly grow within the club, greater growth happens outside of the club—it’s what I call escaping the “club bubble,” or the “clubble.” Life in the clubble is warm, comfortable and safe. But outside the clubble, leadership roles are filled with skill-building challenges and exciting opportunities to meet new people.

The area director is the information conduit between clubs and division and district leadership. The area director helps clubs meet the mission of helping members grow. Don’t think of them as supervisors of the club but rather as resources for the club. They don’t single-handedly solve club problems, they partner with members to brainstorm and carry out solutions. They are not district “spies,” rather trusted advisors who can help identify club circumstances that may benefit from the strength of district leadership.

An area has four to six clubs. The area director is required to visit each club twice a year to observe a meeting, and to help track the clubs’ progress in the Distinguished Club Program. They also attend regularly scheduled district leadership meetings and facilitate area speech contests. The one year of serving in this role can be a very fun one!


Why Become an Area Director?

After surveying dozens of current and past area directors, I identified four primary reasons why people take on this district leadership role.

Most area directors will say the experience was much better than they expected. Leah Cox, DTM, of Crosswinds Toastmasters in Marshalltown, Iowa, says, “I met some of the best people in Iowa. I gained more confidence than I ever thought possible. After area governor, I became division governor, district secretary, conference chair, assistant to the district governor and then district director. Now I am a division director again, looking forward to doing it all over.”

She cherished the camaraderie she built with district leadership members. “We bonded. It was like high school again, studying and working together, discussing the work, seeing progress. I think being an area governor is the most honorable role in Toastmasters.”

As area director, Elizabeth Jordan, DTM, of Hertfordshire Speakers, Hatfield, United Kingdom, enjoyed watching others flourish. “My favorite responsibility was visiting clubs and getting to know members,” she says. “I’d listen to their issues and work to help them as individuals as well as clubs. It was terrific to see clubs thrive. We ended the year with four President’s Distinguished clubs and two Select Distinguished.”

Distinguished Toastmaster Gwyn Pinto-D’Mello of Advanced Royal Toastmasters and Royal Lunch’N’Learn Toastmasters, both in Toronto, Ontario, Canada, points to the dramatic personal growth she experienced. “I grew as a speaker because, when visiting clubs, I could fill in if they needed [a speaker],” she says. “I learned delegation and time-management skills. I learned how to set small goals to reach larger ones. It expanded my network and I made friends all over the world. I took on new challenges and stepped out of my comfort zone.”

The job of an area director is not complicated, but it’s not without challenges either. Common struggles include:

In Toastmasters, you learn by doing, so when it comes to this leadership role you develop the skills to overcome such challenges with minimum risk. Ask for help. Be bold and creative as you find your own solutions. Don’t stay in the problem—seek to solve the problem.

Brenton Hilaire, of Nature Isle Toastmasters club in Roseau, Dominica, faced a unique challenge that did not deter him. “I had a logistics and language barrier because I had two French-speaking clubs in different territories,” he notes. “My solution: I took a delegation of French- and English-speaking Toastmasters from SXM [Sint Maarten] to Guadeloupe. They conducted a club visit and officer training for me. It truly felt like a Toastmasters family.”

Linda Anger, DTM, a Pathways Ambassador and member of the Optimistic Orators Advanced club in Warren, Michigan, faced resistance from clubs when she wanted to create an area council of club leaders to help them. Her solution was pragmatic: “I decided to visit each club more often, about once a month. I was visible and available. I built relationships with members and club leaders and emailed all area members with news of upcoming events. … A corporate club told me they wouldn’t have survived without my consistent involvement.”

“Don’t think of it as a requirement for your ALS or DTM; think of what ­leadership skills you will develop, and how you can help your clubs grow.”

The challenge that Leonard Scuderi, DTM, of Leading Edge Toastmasters Club in Brisbane, Australia, faced when he was a 23-year-old area governor in 1999 was his age. He says, “Some members were 30 or more years older than I was. I wasn’t sure how they’d respond to someone so much younger. But I reminded myself that everyone can learn something from everyone regardless of age or experience. I was there to serve the members, but I realized I could learn just as much from them.”


Advice for the New Area Director

If you are a new area director and you feel a bit overwhelmed or unprepared, relax. You are neither alone, nor unusual. Any transition to a new role brings trepidation and fear. It just means you want to do a good job.

Area directors past and present have advice to share to help make the job smoother and more enjoyable. For example, Tasha Hart, ACB, CL, offers this simple guidance to a nervous new area director: Don’t think you have to know everything from the start. Hart, now the president of the Daybreak Toastmasters club in Jackson, Tennessee, says at first she was daunted by the idea of serving in the role. 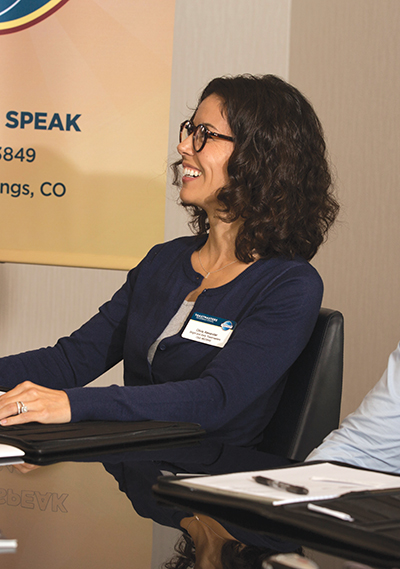 “I was afraid about becoming an area director. Could I handle it? Would I be effective and helpful? Then I realized that I didn’t have to figure it all out at once. On your first day of Toastmasters you didn’t know that 10 speeches later you would be a better communicator. You just did one speech at a time.

“Same thing with area director. I took it one step at a time. I thought, It may take me 10 speeches, 10 steps, 10 days or an entire 10 months to figure it all out but I will not give up. In the end you will be further along than on the day you started.”

Mala Balasubramanian, ALB, ACB, of Trichy Toastmasters club, India, emphasizes a softer side of being area director. He says, “Know yourself first, as a Toastmaster. Know your goals and your personality. Then you can help others grow. Be considerate in your communications and meticulous in your planning. And be empathetic and aware.”

If you are a new area director and you feel a bit overwhelmed, relax. It just means you want to do a good job.

Clear, concise and complete communication is the foundation of success for area directors. With some areas being geographically large, or having a large number of members in many strong clubs, keeping information flowing smoothly is essential. Ragnhild A. Sunde, ACS, CL, has decades of Toastmasters experience as a member of several clubs and the founder of the Toastmaster Academy club in Naples, Florida. As a first-time area director, she says, “After my first District Executive Committee meeting in June, I wondered how to communicate necessary information to the clubs. I decided to produce an area newsletter. I also forwarded it to district leaders and individual Toastmasters. Overnight it went viral on Facebook.

“It was copied and forwarded left and right. It was fun! Everyone loved having all the information they needed in one place.” It’s a simple idea, but getting the word out is so important.

Here are some other useful tips from seasoned area directors:

The role of area director is so important to the mission of Toastmasters because it measures the heartbeat of the member experience at the club level. It may be a big fancy title, but it’s a fun and richly rewarding role. Embrace it. You won’t regret it.

Learn more about the area director role in the manual Serving Clubs Through Visits: A Guide For Area Directors, Item 219. In it you’ll find more tips, the Area Director’s Club Visit Report (Item 1471) and a list of additional resources.

Build rapport with the club president: