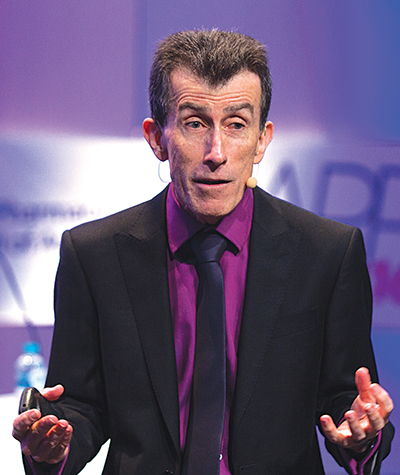 Glen Savage, DTM, didn’t set out to find a career in public speaking and leadership coaching. As a pharmacist, his focus was on helping others improve their health. But when accepting an opportunity to join the training department for a large pharmaceutical chain in 2000, his responsibilities grew to include giving workshops on management development, communication and leadership to more than 800 pharmacies. He enjoyed his new role and says, “A serial people-developer was born.”

Since then, he has founded the Purple Speaking Academy, a presentation skills training firm in London, England, and is a frequent keynote speaker for large events and conferences. A member of the Riverside Communicators Toastmasters club, he shares how he came out from behind the pharmacy counter to lead others to personal and professional growth.


What attracted you to a coaching career?

I am passionate about communication and influence—how we connect, engage and collaborate to achieve great things. That led me to work with people, particularly leaders, to help them find their voice, construct and convey their message and deliver it powerfully. In particular I love to coach individuals, helping ­transform both inexperienced and seasoned speakers into exceptional ones. Through Purple Speaking Academy I now combine my two loves—developing people and speaking. I have been so fortunate to have learned the skills and mindset of an impactful speaker through Toastmasters. Recently, I coached Dr. Dimple Devadas, a psychology coach, to the TEDx stage in Ulsoor, ­Bangalore. What a thrill that was!


Tell us about your experiences as a mentor.

The buzz of helping others transition from anxiously speaking down at their own shoes to confidently looking out at, engaging and enthralling an audience, is incredibly rewarding. I have also had the joy of mentoring a new club, watching and supporting a talented group of people establish themselves as speakers.


What are some obstacles you’ve had to overcome?

I was born with a hereditary hand tremor. I came to believe that if I spoke to a group, the audience would be distracted by the tremor and assume I was a shivering bag of nerves and it would affect trust and credibility. This is what I’d much later come to learn was a limiting belief.

My confidence in speaking was pretty low, and my doctor stepped in with beta-blockers to stop the tremor when needed. That was helpful, except I then had another limiting belief that I couldn’t speak unless I took a tablet.

Then I explored all of this with a great Neuro-Linguistic Programming (NLP) coach. I discovered that my beliefs were just beliefs—a way of thinking that was inhibiting me. I developed a newer, healthier belief that I could speak and train without tablets and the tremor didn’t matter. My NLP coach helped me focus on the possibility that people would be interested in what I had to say and the benefit I could deliver. I haven’t taken a beta-blocker in over 15 years. People do in fact listen to me. And no one has ever commented on my tremor.

Toastmasters has given me the skills and confidence to pursue the career I’ve always wanted. I could always babble—but now I can speak, and people even listen! I started my career from behind the safety of a pharmacy counter. Now I get to speak at events and help others develop their speaking and leadership abilities. Wow!


What advice do you have for aspiring speakers?

Focus on the audience, rather than yourself. If you take on the mindset that you have something others deserve to hear, you’ll speak stronger and deliver more benefit. It’s all about the message and not about you. If they happen to like you, that’s just a bonus.

Mariam Jehangir is the editorial assistant for Toastmaster magazine.