Use this easy humor technique to produce audience laughter. 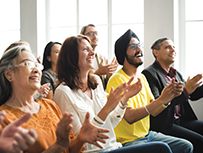 A few people are naturally funny. The rest of us aren’t. Is there any hope for us non-humorists? Actually, yes, and the simplest starting point is the Twist.

My Toastmasters journey began 50 years ago in New Zealand. I was a serious young accountant, definitely a non-humorist, and very apprehensive about public speaking. My club had two members who triggered laughter readily. I wasn’t one of them.

I felt condemned to be a “serious” speaker for life. Even dabbling in Toastmasters’ humor and entertainment manuals didn’t give me the key to escape from my humorless speeches. But surely, I thought, there must be a logical way to learn how to lighten up.

It was after I was drawn to the challenge of competing in the Toastmasters World Championship of Public Speaking® (WCPS) that a faint light started to flicker. Over time, I won at the district level of the International Speech Contest five times (and lost many more times than that), and I advanced to the 2003 World Championship of Public Speaking. After competing in contests, imbibing the wisdom of contest winners and reviewing every WCPS speech on video, I learned the easy entry code to humor for non-humorists: Do the Twist—but not the Chubby Checker way!

What do I mean? Picture this. You are listening to an engaging speaker who stops and says: Gentlemen, you have no idea of the power of a love letter until your wife—intercepts one. That simple sentence with its twisted ending sent laughter through the large audience at the 2001 World Championship of Public Speaking, helping earn J. A. Gamache third place.

It is the perfect twist: Our thoughts are moving in one direction when—wham!—we are redirected, ending up in a completely unexpected place. Its structure is elegantly simple: Short statement—Pause—Surprise redirection. It is surprise at its best. And surprise is the foundation of humor.

As I viewed WCPS contests, I discovered twists being used by champions and contenders alike. Examples:

He was six foot—from shoulder to shoulder.
­—Douglas Kruger, third place in 2004 WCPS

It’s the same sort of mentality [as] those who book their graves in advance—they don’t want to miss a good spot!
—Brett Rutledge, 1998 World Champion

Some contestants even took an extra step, artfully crafting a three-phrase twist.

When I was 22, I got a job as a hydration specialist—a bartender.
—Josephine Lee, third place in 2016 WCPS

I had a job I didn’t like. I hadn’t had a date in three years—and I had a couple of roommates named Mom and Dad.
—Lance Miller, 2005 World Champion

The great news is that twists are easy to create and low-risk to deliver. For your next speech, try writing your own version of any of the following:

I’ve had a lot of luck this year—all of it bad.

Now, everything I tell you today is true—except the stuff I make up.

Also, be on the alert for twists when listening to speeches. Isn’t it amazing how just a simple short phrase—followed by a pause—and a twist, triggers laughter? It truly is the non-humorist’s easy entry point to humor.

But that’s not all. A twist comes with two bonuses. First, it’s low-risk. If the audience doesn’t get it, you just carry on. You’ve only lost one or two short sentences of speaking time. That risk is almost zero compared to a joke or funny story that bombs. Second, it acts as a mental speed bump. Just like a road speed bump, it jolts wandering minds and puts them back on alert. It helps maintain audience attention.

My discovery led to three others in the twist family—put-downs, asides and exaggeration, all with the same DNA of brief, witty humor and low risk of failure. My advice: Where possible, include the whole family in the same speech! Family introductions follow.


1 Put-downs. When you put yourself down—playfully, of course—audiences love it. Self-deprecating humor is a hit because speakers who make fun of themselves are more relatable. Here are a couple of self-directed put-downs that have worked for me:

I was a real nerd. I graduated from ­Harvard with an MBO—a Master’s in Boring Others.

I am a gourmet cook—my seven-course specialty is a hot dog and a six-pack on the side.


2 Asides. Asides are short side comments, a sort of insider’s remark to the audience about something you just said. Many asides are humorous in nature, and they frequently carry a twist-like surprise. Toastmasters World Champions have used asides to nimble effect.

At 8, I finally rode my bike. To celebrate, my mother and I took the training wheels off—Don’t get excited, we only took them off the front wheel!
—David Nottage, 1996 World Champion

Many, many times, I would don the armor of righteousness; mount my trusty gray horse; Yeeeha!—Work with me here!
—Mark Hunter, 2009 World Champion


3 Exaggeration. Exaggeration is a statement so surprisingly absurd that it amuses. Ideal for the non-humorist, it’s easy to play with because we are surrounded by material that can be taken to extremes, as these examples demonstrate.

He moved like a spastic pinball on ­amphetamines.
—Randy Harvey, 2004 World Champion

Picture your audience naked—that’s just one of 4,279 suggestions I received from the folks back home on how to improve this speech.
—David Sanfacon, finalist in 2003 World Championship

Each member of the twist family works well because it is simply structured and easy to understand. Smiles and laughter readily follow. Even getting started is easy: Begin with four files labeled Twists, Put-downs, Asides and Exaggeration, and just keep adding examples you like, along with your own creative ideas. Then keep sprinkling your speeches with your newfound wit. You will soon begin to impress your club members and excite contest judges.

Brian Woolf, DTM is a member of Advanced Communicators club in Greenville, South Carolina. Brian has won five district speech contests and was a finalist in the 2003 World Championship of Public Speaking. He is the author of four books, including The Speaker’s Toolbox: 47 Tools to Build Better Speeches.