Funny You Should Say That
August 2017

Kick that idea right out the door. 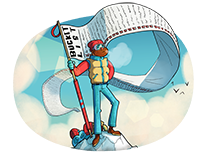 Do you have a bucket list? If you do, I would suggest you burn it. If you don’t, keep it that way. You don’t want a bucket list. It can’t do you any good and it may do a great deal of harm.

Let me explain. First, for those unfamiliar with the term, it is derived from “kick the bucket,” an old English slang phrase that means to die (more on this later). A “bucket list” is an enumeration of those things you would like to do before the arrival of that unhappy event. We are in the age when living life to the fullest seems to be an absolute requirement for happiness. I’m not sure what “living life to the fullest” means, although it appears to involve activities such as climbing Mount Everest and zip-lining through the Amazon jungle—endeavors that make you feel fully alive by offering the prospect that you could end up fully dead. The idea is to face your fears and “leave your comfort zone” so you don’t end up on your deathbed saying, “I wish I’d skydived into the Grand Canyon.”

To avoid this tragic fate you make a list of all the things you want to do before you shuffle off your mortal coil and then check them off as they are accomplished. This is how you know your life hasn’t been wasted—when there’s a piece of paper lying by your corpse containing a lot of check marks. The more marks, it seems, the more happily you will have died. I suppose if you have the most check marks of all, you could be considered the happiest dead person who ever lived.

Before the 2007 film The Bucket List appeared, I had never heard the term; now I can’t stop hearing it. Everyone has a bucket list. It’s absolutely de rigueur. If you don’t, you’re considered a wallflower in the wild, whirling dance of life, afraid to get out there and bust a move.

This is how you know your life hasn’t been wasted—when there’s a piece of paper lying by your corpse containing a lot of check marks.

Well, I don’t have a bucket list. (And what’s wrong with being a wallflower? While other people are out there stumbling through the foxtrot you get to eat all the chips and dip.) My aversion to the concept begins with the term itself. As I mentioned earlier, the term is derived from the English idiom “kick the bucket.” No one is sure where it comes from but there are several theories, all equally unpleasant. Some think it comes from a manner of dying in which a person stands on a bucket with a noose around his or her neck. The bucket is then kicked away and the person is hanged, which means either execution or suicide depending on who does the kicking. I may be missing something but neither of those unfortunate terminations makes me think of a life lived to the fullest.

Another possible explanation comes from the Right Rev. Abbot Horne, a clergyman of the 18th century: “After death, when a body had been laid out, the holy-water bucket was brought from the church and put at the feet of the corpse. When friends came to pray, they would sprinkle the body with holy water. It is easy to see how such a saying as ‘kicking the bucket’ came about.” No, reverend, it is not easy to see. Kicking involves a coordinated effort by the neuromuscular system that propels the leg outward in an aggressive and, dare I say it, lively manner. Show me a dead person who can do that and I will show you a person who is not only not dead but who is so furious at being pronounced so that he is ready to render that condition unto whoever said he was dead.

Regardless of the phrase’s origin, my point is this: Having a bucket list will make you less happy, not more. A bucket list is really a wish list, and we all know the distance between a wish and its fulfillment. Chances are you will never do most of the things you write down (did you really want to bungee jump off the Yachi River Bridge, anyway?). Time will slip by, you will come to your end, and you will have no choice but to guiltily kick your bucket list into the bucket you are kicking.

What a way to go.