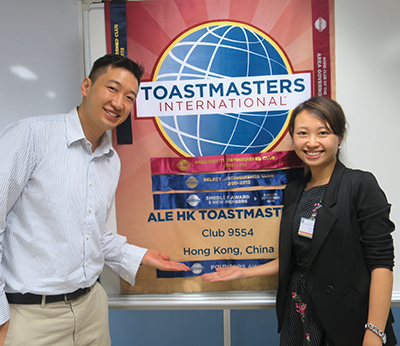 Roberto Fong, was born in France and educated in the United States. Now an English teacher and public speaking coach in Kowloon, Hong Kong, he jokes about being shy, but after 14 years in Toastmasters, Roberto has grown into a confident speaker. He mentors Eva Kwok, who claims Fong is one of the funniest speakers she has ever heard.

In 2013, Eva joined the English-speaking ALE HK club, in Jordan, Hong Kong, after being introduced to Toastmasters by her lecturer at the Chinese University of Hong Kong. Having won speech contests on her debate team, she thought she could become an eloquent speaker. This year Eva joined a second club, the Competitive Speakers Hong Kong Toastmasters club, in Tin Hau, which Fong founded.


How did Roberto become your mentor?

He was assigned to me. As I prepared my first five speeches, he had to chase after me to review my outlines before my speech day. After each successive speech, he had to search for me again to provide feedback. After my third speech, I thought he would let me proceed on my own, but he remained supportive. As busy as he is, he finds the time, the patience, and—most important—the energy to follow up with me.


What was it like to be mentored by him?

Roberto is tough but helpful, persistent and devoted. I sometimes avoided him, but in the end I was grateful for his guidance.


What have you learned from him?

Roberto taught me how to create a message that my audience would remember years later. Without him I would probably still be an overconfident, stagnant speaker. I thank him for not giving up on me.