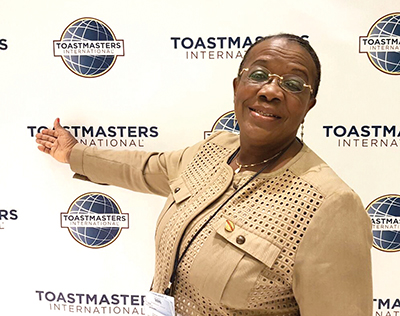 In 2008, a woman from West Africa living in New York learned about Toastmasters from a friend in London.

By joining the Bronx Toastmasters club in New York, Dunstanette Macauley, DTM, began to further her global outreach and build upon her skill set as a leader, mentor and businesswoman.

Although she had originally wanted to be a lawyer, Macauley had a scholarship to study economics, a field not attracting many women at the time. She earned her degree in economics in England and then traveled to France for her diplomatic studies. In 1972 she worked as a young diplomat in Rome. She then married a Togolese man, which brought her to Togo in the early 1970s. There, she worked at the ECOWAS Fund (Economic Community of West African States) as head of conferences and external relations for 18 years, then left to start her own event company.

In 2000, Macauley moved to the United States for family reasons and became a U. S. citizen in 2005. For the last six years she’s been a foundation ambassador for Zonta International, a nonprofit organization that empowers women worldwide. Macauley splits her time between New York and Togo.

Whatever she does in life, wherever she may be, ­Macauley does it with passion.


Talk about the culture of your clubs in Togo and New York.

Meetings in New York are held in the evening after work, whereas in Togo they are on Saturdays. In Togo we have fewer time constraints, and can build in social time and camaraderie. For example, we have a break for refreshments during which time a member proposes a toast and we share jokes. In Togo, members dress up in business suits; New York is more casual.

Excellence Club in Togo is French-speaking and I do my speeches and roles in English and French. Our district has more French-speaking clubs because the members have gained so much and are eager to share their experiences. In addition to being a member of a French-speaking club, I also sponsored the first English-speaking club in Togo, Kekeli Toastmasters club, which has produced two contestants of the International Speech Contest Semifinals.

Tell us about the corporate club you started during your term as district governor.

I was inspired by the story of the Bank of America corporate clubs, which was shared at training right at the beginning of my term in 2014. District 94 had few corporate clubs and I knew I had to sell this idea.

I started by inviting employees of various companies in Lomé, Togo, to attend our club meetings. For the Togo Revenue Authority (OTR), I sent a letter at the end of the work day and the next morning the personal assistant of the CEO called to tell me he had approved the project of starting a corporate club. I later found out he was a Toastmaster for 23 years in his home country and wanted his staff to reap the same benefits as he had.

At the demonstration meeting he shared his personal story and many were inspired. It has been rewarding to see lives being transformed. Most members tell us how their communication skills with clients have greatly improved since the OTR Elite Toastmasters club of Lomé opened.


Are more corporate clubs being formed in Togo?

Three corporate clubs are in the pipeline, two of which are in international organizations. I think when people see how the lives of their friends and families have been changed, they are eager to join. The greatest benefit is self-development. When you improve your confidence and can speak in public, your professional and social lives change.


What’s your advice to others?

I would say have the courage to believe in your dreams and goals in life, and then pursue them. Look inside you for stories to share, starting with your Ice Breaker. Toastmasters provides a platform to express yourself—where else can you do that without fear or discouragement?