Funny You Should Say That
October 2016 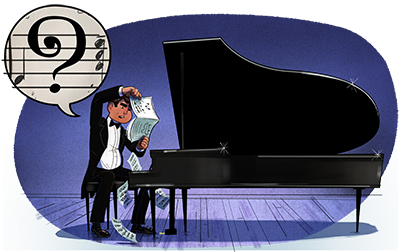 I’m a self-taught musician. That means I can play music without knowing what I’m doing. It’s quite an accomplishment. If you want to see for yourself, come hear me play. I guarantee the first thing you’ll think is, He doesn’t know what he’s doing. I tried taking lessons but it was just too confusing. My teachers would use technical terms that I always interpreted the wrong way. For instance, the word interval, which means the distance between two notes, had a different connotation for me—namely, the distance between the correct note and the one I actually played. Or the term accidentals, which refers to the sharps and flats that raise or lower notes a half-step. For me, it meant that if I actually did play the right note it was purely by accident.

Self-taught musicians often feel inferior to “real musicians,” the ones who can sight read Mozart like a nursery rhyme and play Rimsky-Korsakov’s Flight of the Bumblebee while ordering takeout on their iPhone 6s Plus. I felt that sense of inadequacy in a particularly painful way when, after I played two sets at a club, a classical musician in the audience came up to me and said, “Congratulations. I don’t think I’ve ever heard someone play rubato so effectively for an entire evening.” Bursting with pride, I went home to look up rubato. It means an elastic, flexible tempo. In other words, he told me I had been playing out of time all night.

That was when I decided to become a real musician. Maybe I couldn’t go to a conservatory but I could at least talk like these guys. So I went and got some books on reading music. As I looked at words like scordatura, ondeggiando, embolada and divertimento, I thought maybe I should have gotten a book on reading Italian first. Music may be the universal language but the Italians are the ones who tell you exactly how the universe runs. And I mean exactly. In my world, tempo simply means slow, medium or fast. In the classical world they slice it thinner. You’ve got three kinds of slow (largo, lento and adagio), three speeds for medium (andante, moderato and allegretto) and three gears for fast (allegro, presto and prestissimo). It’s easy to miss the nuances. You could be playing largo when the conductor decides he wants to quicken the tempo ever so slightly, inching it up to adagio. You play it just a little too fast and end up in andante, which you then confuse with al dente and start thinking about spaghetti and meatballs. This causes you to completely muff the difficult presto section in the “Summer” portion of Vivaldi’s Four Seasons, lose your position as first violinist with the London Symphony Orchestra, and end up giving lessons to third graders in Hamburg, Germany. It could happen.

Not only are you told how fast or slow to play a piece, you are instructed as to the emotion you should play it with—con lancio (with vigor), malinconico (melancholy), precipitando (impetuous) and sussurrando (whispering) being just a few examples. There’s also lacrimoso, or mournful, where your playing actually brings the audience to tears. My playing does that all the time. The only difference is that with lacrimoso, the effect should be intentional.

Or you can be told that for a certain section you are not to play at all, as indicated by the term tacet (silent). If you’re a poor player you may find that word scrawled across your entire score in the conductor’s own handwriting.

There were some words that I actually did recognize, like acapella, which means singing without any instrumental accompaniment. What I didn’t know is that acapella is actually an old Italian word for “I forgot my guitar.” I’m also familiar with opera, which is when people sing like they’re making fun of opera singers.

Armed with this new vocabulary I headed down to my Friday night gig backing up a female singer, determined to let her know she was playing with a real musician. Sitting at the piano, I said, “Why don’t we start with an allegretto feel tonight. You know, nice and easy. Then I’ll push you with a little precipitando and you can respond con lancio.” She looked at me like she was trying to understand what I said. Then she slapped my face.