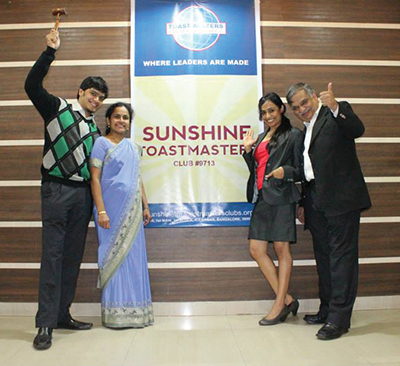 Anand and Vijayalaxmi Bahirat live in a bustling home in Bangalore, India, where two businesses thrive, guests come and go throughout the day, and their two children, Amit, 26, and Sheetal, 29, can be found practicing their Toastmasters speeches.

Originally from different parts of India, the Bahirats lived in the United States for eight years before settling in Bangalore 16 years ago. The family of four, who live together, joined Sunshine Toastmasters club in 2008 and have all earned their Competent Communicator and Competent Leadership awards. In addition, each family member has served as club president, among other officer roles.

“The Sunshine club members are like extended family,” Amit says. “It is the main reason that we are still a part of Sunshine even after all these years. We couldn’t ask for a more supportive group of people.”

When they’re not busy evaluating each other’s speeches, the Bahirats play board games, watch movies, travel, and visit friends and family. They often converge in the kitchen on weekends to cook something special. “We’re not just a family, but we’re a family of friends,” Amit says.

Amit’s mother, Vijayalaxmi, initially discovered Toastmasters for him when he turned 18. The mother/son duo was the first in the family to join. “I felt he could use a confidence booster,” Vijayalaxmi says. “I took him to a meeting or two, and loved the experience myself, so I joined with him! Then, when we started giving a few speeches, Sheetal and Anand tagged along.”

Anand is the patriarch of the family. He worked in the software industry for more than 30 years in India, Japan, Australia, parts of Europe and the U.S. He is partially retired but still helps his wife, Vijayalaxmi, with her business, Big Blender Foods Private Limited—a company that makes healthy drinks accessible.

The daughter, Sheetal, is a fashion stylist and image consultant who has used her Toastmasters skills while training people and speaking at events. The networking and mentors she’s met have added immense value to her career and life, she says.

The youngest of the family, Amit, runs a digital marketing agency called MadHat Communications. As a copywriter, he’s benefited from a rich source of ideas through Toastmasters. He says his experience has helped him not only become a confident orator but also gain skills that he’s applied to his business and career. “Working with a team, and leading from within, was a very rewarding experience,” Amit says. “It has certainly helped in my professional career, and I believe that it was one of the main reasons I landed my first job.”

Anand and Vijayalaxmi have watched their children grow in all stages of life—but sharing in their continued education has created even more proud moments for them.

“Normally the baton of leadership transfers from father to daughter/son. In the Bahirat family it is quite different, as I had the pleasure of taking over as club president from my very own daughter!” Anand says. “It was heart-warming to see her participate at the divisional level for the Evaluation and Humorous Speech contests. And it was a proud moment when Amit took over as the president of our club, as he was complimented for showing his leadership skill and worked as a good team leader during his term.”

Vijayalaxmi shares her husband’s sentiments. “It always amazes me how my children convert small incidents at home into speeches,” Vijayalaxmi says. “It’s always fun to compete with them—but I am at the top of the world when they win.”

The same goes for Sheetal and Amit, who get to witness their parents transform. “I love watching my parents enjoy stage time!” Amit says. “My mum’s transformation was one of the most amazing I’ve ever seen. It cemented my belief in the value and power of the Toastmasters movement.”

His sister believes Toastmasters has brought a new dynamic to their family. “The thing I love the most about our Toastmasters journey as a family is that we get to see each other in ways that we have never seen before,” Sheetal says. “It has brought us a lot closer, built trust and bridged the generation gap.”


Shannon Dewey is digital strategy and engagement editor for the Toastmaster magazine. Reach her at sdewey@toastmasters.org.