Funny You Should Say That
November 2016

Please step into my office while I put you through the Spanish Inquisition. 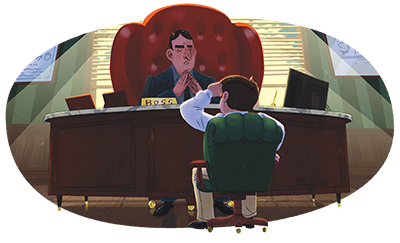 Here’s a little test for all you working folks: I’m going to say two words and I want you to notice your reaction to it. Ready? Performance Review. How many noticed a little tightening in the chest, a slight knotting of the stomach, a vague feeling of dread tinged with a modicum of resentment? That’s because these words describe a process in which you walk into the office of somebody who makes more money than you do, sit in a small chair in front of that person’s desk while he or she sits behind it in a much bigger chair and proceeds to evaluate your job performance. The desk facing you has been strategically placed in front of a window with the sun streaming in, outlining your reviewer in a golden glow that can’t help but remind you of Judgment Day where you stand before your Creator and find out which way you’re going.

Who likes that? You walk in as an employee and come out as a defendant. If it’s a good review you get an acquittal; if it’s so-so, consider yourself on probation; and if it’s bad you’ll be convicted of first-degree ineptitude, with the admonition that you should start looking for work at a company that doesn’t give performance reviews.

The company I worked for had a fairly elaborate process. I was asked to recommend three co-workers who I would like to review my performance. Then I was given a form to fill out to review myself. When I went in for my evaluation, my own review—how I perceived myself—would then be compared with how I was viewed by my colleagues, with the objective of determining where there might be some … discrepancies. In choosing my co-reviewers, my first thought was always which ones would be most susceptible to bribery, but that didn’t work. I wasn’t offering enough money. So I picked my closest friends and said, “Show me your reviews before you submit them so we all agree I’m doing great. If you don’t, I’ll say you’re stealing office supplies.”

The first three areas for comment were “Effectiveness in Performance,” “Mastery of Specialization” and “Professional Ability.” In other words, “Are you doing your job?” “Are you doing your job?” and “Are you doing your job?” I always thought this was a secret test of creativity to see how many ways you could answer the same question. Then came two sections titled “Strengths” and “Areas for Improvement.” They used to be called “Strengths” and “Weaknesses” but Human Resources said that “weakness” was demotivating. Nobody wanted to be called weak, especially the weak performers who came to HR bawling their eyes out. So the more positive phrase was adopted. Personally, I don’t see how getting fired for failing to improve in your areas for improvement is any less demotivating, but apparently it’s not politically correct to scare the help.

My reviews were always ambiguous. I was generally given high marks for being good at my job, but that very strength became an “Area for Improvement” because good performers are expected to be mentors. That never made sense to me. I was a good performer because I didn’t waste half my time showing other people how to do their jobs. I did try. Someone asked me how to solve a problem and I said, “Do it like this, and if you can’t, then I’ll do it.” I was told that was not good mentoring—and because of that attitude I was also not a “team player.” A team is a group of people working toward a single goal. In my experience that goal is: Who Gets the Credit? That’s why I liked working alone. I’m glad to take the blame, but if there’s credit, I’m getting it. All of it. With whipped cream and a cherry on top.

I mentioned in the beginning that among your reactions to a performance review there might be a “modicum of resentment.” Modicum might not be the right word. How about a 4,000-ton boatload? Who is THIS person to judge ME? This officious, obsequious quisling who gets paid six figures to DO NOTHING! You can’t say that because it wouldn’t look good under “Areas for Improvement.” But you think it. That’s why I like Toastmasters. They have evaluators to evaluate the evaluators.

That’s the job I want.