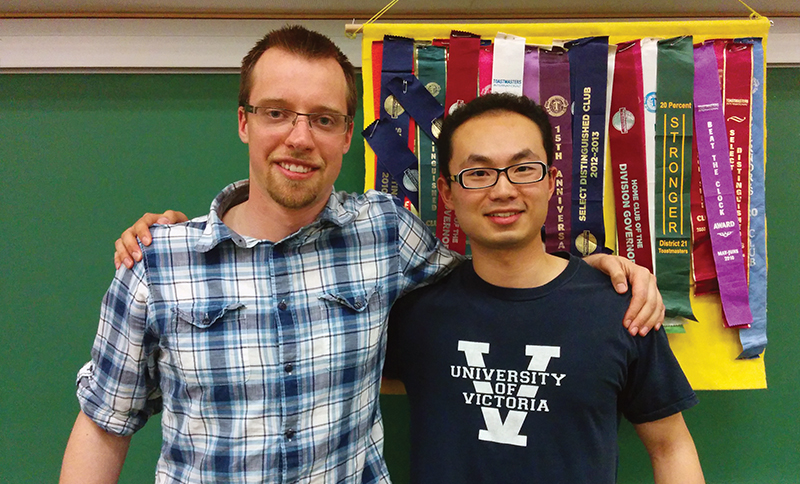 Muyang (Mike) Zhong, CC, ALB, moved from China to Canada to study for a master's degree in physics at the University of Victoria, British Columbia. His native language is Sichuanese Mandarin, and a friend suggested he join Toastmasters to practice English and develop humor and storytelling skills. He joined the NiteShifters club in Victoria and Steve Hawrys was assigned to mentor him.

The two have much in common. Steve encouraged Mike to try new things, including different club roles. Mike served as the 2015–2016 club president. Steve took his own advice and went to Costa Rica for three months to teach English. After returning, Steve presented his speech “The Best Decision I Ever Made,” which highlighted his decision to pursue a master's degree and served as an example of how mentoring is good for the mentor as well as the mentee.


How did it feel to have a mentor?

I immediately liked Steve because of his approachable, understanding, non-judgmental and helpful nature. His passion for life once led him to do 1,000 pushups in one day!

What was it like for you to adapt to a new country?

It was tough. I often felt lonely and had no one to talk to. Steve started inviting me to go hiking, climbing, golfing and many other things outside the club’s meeting time. I now feel included and part of the Toastmasters family. This makes my experiences in Canada really positive.

How is it going now that you’ve had the chance to practice speaking in the club?

My speaking skills have improved immensely because of the enormous support I get when developing and delivering a speech. Now I have no problem articulating evaluations and I am beginning to see my potential as a public speaker. I hope to find work in Canada so that I can apply all the skills I am developing to help other people grow.