You Got Me a Card! How…Nice

Sometimes a greeting card says more than you think. Or intend. 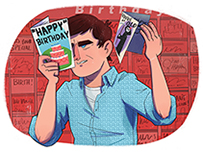 A friend of mine had his 70th birthday recently and, reluctantly, I went to buy him a card. I say reluctantly because I knew he wasn’t looking forward to it. A few days before, he had said to me, “What do I want a party for? So people can say, ‘Congratulations, your best years are over. Have a piece of sheet cake.’?” Still, he had no choice. When it’s your birthday you have a party with cake and cards and gifts. It’s what you do. If you say you don’t want a party, nobody will believe you and they’ll throw you a surprise party instead, which is even worse. In fact, for people like my friend, the shock could prove fatal. (Really—people standing around in party hats and sparklers while someone calls the funeral home. That’s just not the way you want a party to go.)

So there I was, walking through the card aisles, trying to buy a birthday card for a man who was not particularly interested in celebrating his inexorable slide into decrepitude. I was pretty sure they didn’t have a sentiment for that so I kept looking. It seems most cards for older people try to be either funny or dirty. Why is that? It’s like saying, “You have arthritis, several artificial joints and a libido that couldn’t power a flashlight. Ha, ha, ha!” I found one card, for instance, that pictured an old man with a cane in one hand and a martini in the other, wearing a diaper. The inside said: “Don’t forget to pamper yourself.” Really? Since when is incontinence funny? Trust me, nobody who has it is laughing.

Another card pictured three older men walking on a beach. The first man says, “It’s windy today.” The second says, “No, it’s Thursday.” And the third, “So am I! Let’s have beer.” Get it? They’re hard of hearing. Not the kind of thing you want to say to a person who just spent 3,000 for digital hearing aids.

Seeing how a seemingly innocuous joke can be taken the wrong way, I looked at other cards, like one from a daughter on Mother’s Day. The front says, “Mom—sometimes it’s hard for us because in some ways we see life from different angles…” (Boy, where is this going?) And then on the inside: “But I hope you know that even when it seems I’m just being stubborn I hear what you’re saying and I listen to you with love because I still need you—and always will.”

My interpretation? “Hey Ma, you know those shouting matches we have because you’re always trying to tell me what to do? I still love you. I just don’t love your controlling, manipulative behavior. Happy Mother’s Day.”

Then there was a card in the “Encouragement” section showing a close-up of a dog’s face. Inside, the card read: “Would it help if I licked your face?” Get it? It’s like the dog is sending the card. Only dogs don’t send cards. People do. So some human being wants to “encourage” me by licking my face. And I would be encouraged—to seek a restraining order against whoever sent the card.

In the “Graduation” area I found a card that said: “Achievement is about so much more than a diploma. It’s about hard work, effort, goals. It’s about new opportunities you have because of all you’ve done. But most of all, it’s about the incredible person you’ve become.” Which sounds nice, but they probably could have shortened it to: “You actually graduated from high school. Incredible.”

The wedding section takes up a whole wall. Having gone through a divorce, I thought they should have at least one card that said, “Are you sure?” But that’s just me. What I did find was an invitation to a bachelorette party: “To the Bachelorette. The best weddings are the ones you’ll never forget, and the best bachelorette parties … are the ones you’ll never remember. Have fun!” I’m sure her husband-to-be is going to love getting a call from the police telling him his future wife has been arrested at a bachelorette party for hanging out of a hotel room window throwing champagne corks at people on the street.

So what did I get my friend? Nothing. I didn’t get him a card or a gift, and I didn’t go to the party. The next day he called and thanked me for the best birthday present he’d ever received.