"It was the most important advanced manual!” Leah Cox says of the Special Occasion Speeches manual. Like Cox, ACG, ALB, a member of Crosswinds Toastmasters, in Marshalltown, Iowa, members around the world have high praise for the manual, calling it one of the most enjoyable and valuable in the current Toastmasters education program.

Distinguished Toastmaster Karen Armour of the Modderfontein Breakfast club in Johannesburg, South Africa, initially thought she wouldn’t like Special Occasion Speeches much. Now, she says, it’s the one manual she would choose to do over again, calling it her “all-time favorite.”

What makes this manual so popular? For one thing, it reflects real situations. We all gather for special occasions to celebrate and commemorate. Speeches at these events reinforce the camaraderie of everyone attending. Special occasion speeches are a special occasion in themselves because they confirm within all of us the beauty, dignity and joy of being human. 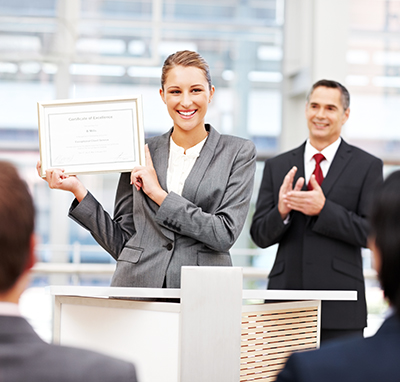 Maybe at some point you’ll need to “say a few words” at a special event, accept an award or give a toast. This manual will help you develop top-notch skills for these unique and touching events.

Its five projects are short, but like any speech, they require good preparation. Fortunately, the projects are fun; preparation and execution lead to quick improvement of your skills. And when a project has a direct impact on life events, it’s rewarding.

“I’ve enjoyed seeing members benefit when preparing for speeches at family occasions or other events,” says Gael Price, DTM, a former division director and a member of the Gourmet Toastmasters club in Wellington, New Zealand. “This is where Toastmasters really comes into its own—when people can explicitly link the learning to their real-life challenges.”

Special occasion speeches, or “epideictic oratory,” are one of several types of speeches defined by the ancient Greeks. The Greek word epideictic means “fit for display.” Such speeches are delivered at public events of praise and commemoration. They include award presentation and acceptance speeches, tributes, toasts and roasts, eulogies, commencement addresses and nominating speeches. They inspire people with uplifting ideas and words. Cicero, the ancient Roman philosopher and politician, wrote, “The epideictic oration … has a sweet, fluent and copious style, with bright conceits and sounding phrases … it is fitter for the parade than for the battle.” In other words, these speeches sound wonderful and build people up.


Let’s take a look at each project in the manual.

“This is where Toastmasters really comes into its own—when people can explicitly link the learning to their real-life challenges.”

Non-members often think that we just give toasts—or eat toast. That’s amusing, but not absurd. In the 16th century, wine was so foul that pub owners added toasted bread to vats of wine to soak up the acidity and improve the flavor. The bread was usually stale, so the wine would improve the bread’s flavor as well. The practice of eating wine-soaked bread was called “toasting.” In the 17th and 18th centuries it became so popular, even raucous, that referees or “toastmasters” were employed to keep order and make sure everyone got a fair turn at eating and drinking. Who knew?


Today, toasting is more refined. Toasting customs vary from country to country, but in many cultures around the world, people honor someone by raising a glass (often filled with champagne) and speaking words of praise or offering good wishes, concluding with a colloquial phrase such as “Cheers!” or “Dry the cup!” In some countries, the closing phrase mirrors the sound of clinking glasses, such as “Tchin Tchin” (French) or “Cin Cin” (Italian.) 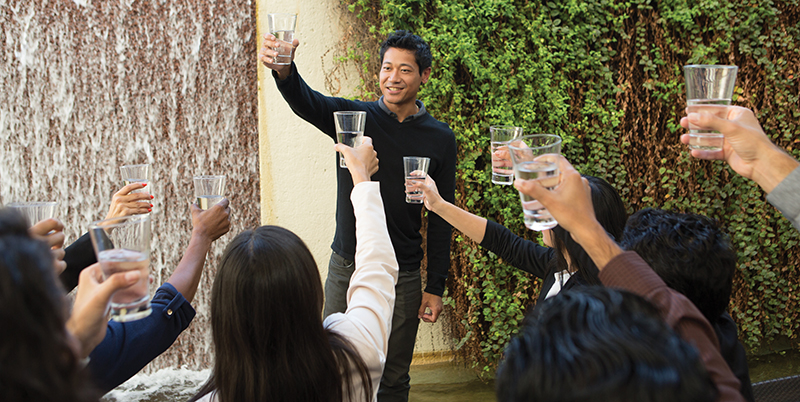 Toasts are offered for a variety of occasions, including weddings, engagement parties, anniversaries and retirement banquets, to name a few. When planning a toast, include a few words about the person (or people) being honored, your association with them and a closing phrase. 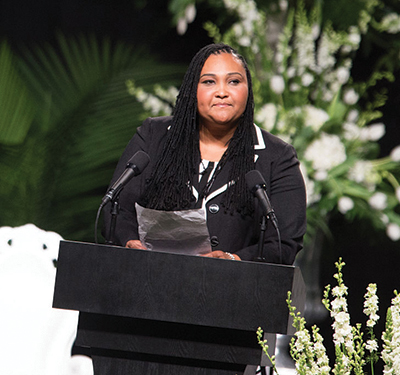 Maryum Ali, the eldest of the late boxing great Muhammad Ali’s nine children, delivers a eulogy for her father in front of more than 15,000 people at the KFC Center in Louisville, Kentucky, on June 10, 2016.
This type of speech praises someone, either living or dead. It includes the eulogy, as well as speeches at anniversaries, retirement parties, community events or corporate meetings. These speeches inspire a deep appreciation of the honoree. When speaking in praise of someone, try focusing on some biographical facts or noteworthy character traits of that person. Describe the personal impact they had on you. Don’t use boring platitudes or clichés; don’t stretch the truth or exaggerate.


The eulogy is probably the most challenging praise speech because it can be so emotional. It’s daunting to encourage hurting hearts while honoring the life of the deceased. Patrick Donadio, ATM, of the OCLC club in Dublin, Ohio, is a Certified Speaking Professional and Master Certified Coach who coaches leaders on communication skills. He offers these tips: 1. Focus on the deceased. It’s not your time to shine. 2. Write it out and read it word for word, especially if you get emotional. 3. Share from your heart. 4. Practice the lines that are particularly emotional to help you get through the most difficult parts. 5. Rehearse out loud, preferably on-site.

When a project has a direct impact on life events, it’s rewarding.

Peggy Carr, DTM, a Pathways Ambassador and member of several clubs in and around Ogden, Utah, says, “I completed this manual never thinking that it would help me give the eulogy for my Toastmasters mentor.” No doubt she echoes the sentiments of many.

This project is not limited to eulogies or actual events. Use your club meeting as your own special occasion. Kevin Baggs, DTM, of East Herts Speakers in Hertford, Hertfordshire, England, says, “I chose to honor the great musician Bo Diddley on the anniversary of his death. It was terrific!”

Or do the project at a real event and invite another Toastmaster to evaluate it. Division Director Tania Fraser, ACB, ALS, of the Wellington Region of New Zealand, says, “I did this project at my grandmother’s 100th birthday party. My husband, also a Toastmaster, was my evaluator.”

The roast is similar to the toast but honors someone by poking fun at them. Poking fun seems a paradoxical way to honor someone, but done well, it’s an affectionate show of admiration. The humor should not be cruel or insulting, but rather entertaining and lighthearted. Special care is needed to conduct a roast that’s not hurtful or offensive.


A roast includes brief stories about the individual, made funnier with exaggeration, one-liners and absurd twists. It often unites the group, especially if the one being roasted is a person in authority. A roast can make someone seem more human and approachable, because they demonstrate that they can take a joke gracefully.

“Being able to deliver these speeches well is a great way to honor someone. What a great gift we can give to others.”

For an effective roast, choose someone of rank or familiarity. Identify characteristics or facts about them that are easy to poke fun at. Tie the jokes and comments to the event, a retirement party for example. Be cautious. If you’re not sure a specific joke is appropriate, run it by someone for their opinion.

Many districts and regions roast outgoing officers. You can also create your own special occasion. Michael Proudlock, DTM, of Bolton Banter club in Bolton, Ontario, Canada, took an especially fun approach with this project: He roasted the TV cartoon character Fred Flintstone. “I had cutouts of Fred, Wilma, Barney, Mr. Slate, etc., at the head table. I played Fred’s co-worker at Slate Construction, roasting him on his retirement.”

It’s an honor to present an award to a worthy recipient, but it’s a skill to present it with dignity and grace. A sloppy or ill-planned presentation will detract from the award’s value, lessen the impact on the audience and make the recipient feel crummy. This presentation is best done with great enthusiasm, positive words and a high regard for the award itself.


When crafting this speech, confirm the correct pronunciation of the award recipient’s name. Briefly describe the meaning or history of the award and why the recipient was chosen. Include a short story or interesting fact about the person as related to the award or the organization. Maybe include a personal observation about the person. The speech should be three to four minutes long. As Franklin D. Roosevelt once said of public speaking, “Be sincere, be brief, be seated.”

Past Area Governor Teppei Ikeda, CC, of Tokyo Toastmasters, recalls praising club and district leaders at his club’s year-end party. “My challenge was keeping the speech short because I was so appreciative. But if I covered everything, my speech would be too long. So I edited it to emphasize the most memorable things done by our VPE and area governor.”

This speech is the sibling of the previous one, and it requires the same dignity and grace. “Accepting an award is like walking a tightrope,” says executive speech coach Patricia Fripp. “You need to be gracious grateful, and humble—but not so humble or self-deprecating that the audience thinks you are trivializing the honor.”


Chances are you will at some point receive an award. When you give your acceptance speech, be humble, not prideful, boastful or entitled. Don’t go overboard with false humility because audiences can spot contrived modesty. Keep it to about three minutes. Long, rambling thank-you speeches are a bore to everyone, except the person speaking and the people being thanked. And unless you’re receiving an Academy Award, you won’t have an orchestra start playing to signal you’re going on too long. 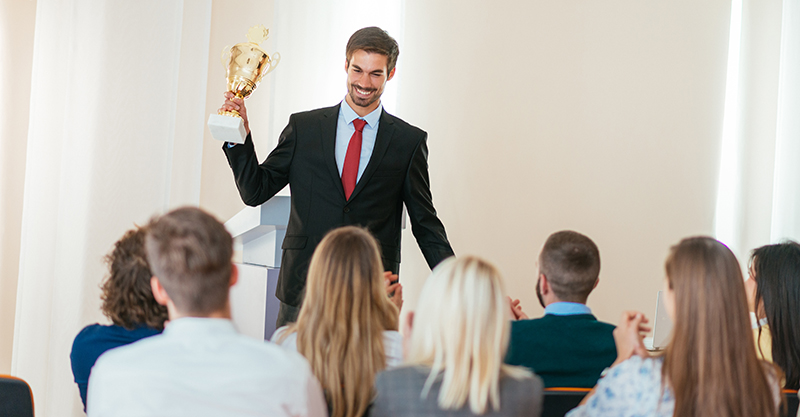 Start by thanking the people who sponsored the award, the person who nominated you (if that’s applicable) and the key people who helped you directly or indirectly along the way. Thank some people by name, but don’t recite a long list because that dilutes the impact of the thanks. Mention things like your connection to the organization or how its goals resonate with you or a positive experience you’ve had with the group.

Because these two projects are so closely related, they’re perfect for a partner project. Jing Humphreys, DTM, a Pathways Learning Master and member of the Earlybirds club in Butler, Pennsylvania, has tag-teamed with other members to do them. “One time,” she says, “I was the presenter for the Toastmaster of the Year award. After the banquet, the recipient and I gave our speeches again at our club to get credit. The second time, to prepare for presenting a Communication and Leadership Award to a community member, the presenter practiced the presenting speech and I role-played the recipient speech.”

So if you want to tackle a fun, practical and rewarding manual, choose Special Occasion Speeches. As TK O’Geary of the Albuquerque Challenge club in New Mexico notes, the opportunities to give such speeches come up often.

“Being able to deliver these speeches well is a great way to honor someone,” says O’Geary, DTM. “What a great gift we can give to others.”