With a sea of more than 2 million choices in the Apple App Store, the probability of one mobile application standing out from the others is quite small. Even smaller is the chance that such an app will garner more than 130 million downloads. But this dream turned into reality for Toastmaster David Reichelt, creator of the mobile game app called Color Switch.


Not only did Reichelt, ACS, beat the odds and slay his Goliath, his underdog story plays out like a Hollywood movie.

Developing Color Switch or any app for that matter was never on his radar growing up. Reichelt dropped out of high school. He has no formal computer programming or business experience and also has the added challenge of being colorblind.

Thirteen years ago, unsatisfied with where his life was going, Reichelt, then 23, joined the U.S. military and became a medic. In his down time, he learned to perform magic tricks with playing cards and entertained the troops. He eventually became a magician at Hollywood’s famous Magic Castle nightclub.

While his career paths seemed haphazard, he’s always been firm in his belief in the power of the mind. Instead of easily dismissing random bits of information as being unimportant, he built a habit of being open to them.

“The biggest change in life could be in the apparently smallest piece of information or unrelated experience presented to you,” says Reichelt, a member of the Imagination at NBC ­Universal Toastmasters, a closed club that meets in Universal City, California.

Such an experience was presented to him in 2013. After moving to pursue a degree in theater at California State University, Northridge, he became intrigued after glimpsing his new roommate playing a dinosaur game and developing an app on his computer. After reading his roommate’s reference books on the subject of game development, Reichelt was hooked. He sold off roughly $4,000 worth of film gear, hired a programmer and started developing his first game. It was an absolute disaster. But he didn’t quit. After making 40 games that failed, he chalked it up to experience and took a year to regroup.

“Every failure or mistake is a learning experience,” Reichelt says. He treated his experiences like a game, waiting for failure to come so he could retrace and analyze his thought process. 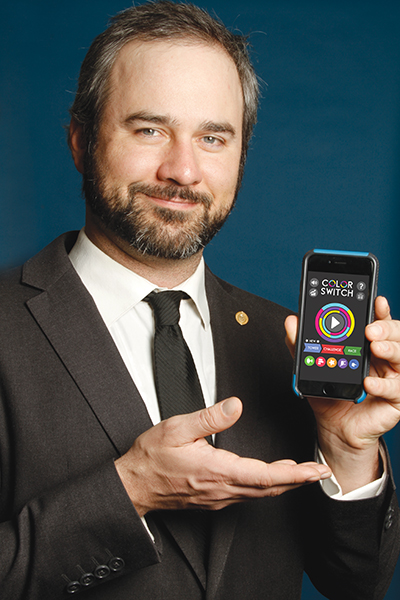 That philosophy served him well, as he stayed on track despite failures with games and an abundance of naysayers. He decided to no longer outsource and learned to make games himself, consistently researching and studying areas like game design, color theory and graphic arts, and always asking for help and applying what he learned. He mastered creative thinking techniques  from reading books such as Thinkertoys and picked up skills from The Art of Game Design by Jesse Schnell. He downloaded apps, analyzed them and learned from online forums, dedicating 15 or more hours a day to his dream of creating a successful game app.

Reichelt knew software existed to simplify game creation. And after some trial and error, he stumbled across Buildbox, a tool he could learn in a day. It helped him to become productive right away.

Then, Reichelt had an epiphany. Within 10 minutes, this nonprogrammer cobbled together a demo, inspired by the colors and shapes of the classic arcade game Pac-Man, and discovered what would become Color Switch.

He knew he had a hit.

“The first time I played it I couldn’t put my phone down for four hours and that’s when I knew I was on to something,” he says. It took him another week to finish all of the other levels.

The goal of the game is simple: Play a ball through endless obstacles. The challenge, Reichelt says, is to match the color of the ball with the color of a section of an obstacle. The ball changes colors after each obstacle it maneuvers through.

Color Switch launched in December 2015. It’s available for both Apple iOS and Android devices and, as of October 2016, it was the most downloaded game on the Apple App Store. It also broke a record by being Apple’s No. 1 app overall for 28 days. The game has now been surpassed by Pokémon GO, but remains one of the most downloaded games of the year.

Why did you join Toastmasters?

I joined because I wanted to become a stage magician and knew that public speaking skills were essential. So I looked up training and found Toastmasters. In 2011 I joined a club in Las Cruces, New Mexico, at the first meeting I attended, and did my Ice Breaker at my second meeting.

Toastmasters had an immediate effect on my performances as a magician. After a while, I noticed that I wasn’t very nervous when I showed up for gigs. I got so used to presenting every week that that confidence went into my magic work. Also, since Color Switch has skyrocketed, I can articulate better and have done many interviews in many formats, like radio, television and live stream, without being nervous. I got that skill from Toastmasters 100 percent.


Seeing what I’ve accomplished so far drives me to want to learn even more as a Toastmaster and as a game designer. It’s had a huge effect on me in that I thirst for knowledge even more now.

Despite being colorblind, you developed an app that involved color. Why?

I wanted to make something that could have universal appeal. So I made it as simple as possible, narrowing my thinking to colors and shapes. Pac-Man was a big inspiration because I saw how much of a success it has been for over 30 years, and it is really about colors and simple shapes.

Did that challenge help or hinder your ability to ­create the game?

I suppose it helped me in a way. Since I am bad with colors, I had to study “color theory,” which enabled me to choose a good color palette by learning how colors go together. I was able to use specific colors by using color-picker tools and the color wheel.


Your game is so successful, but given that it’s free, do you make money?


You took a risk, sold off all your possessions, then had 40 miscues. What motivated you to continue?


How does being a magician tie into game development?


What do you think contributed to your success?

My mom played a major part in fostering in me the desire to learn, reading to me all the books I could handle as far back as I can remember. Since then, I’ve always wanted to improve my thinking. If you improve how you think, you will improve what you do. Also, being willing to fail, and embracing that. Failure leads to success eventually. Also, the military helped me get out of my comfort zone, and then, of course, there’s Toastmasters!

David Reichelt, creator of the Color Switch mobile game app, drives in style in his branded car. Reichelt’s app has garnered more than 130 million downloads since its launch in December 2015.


What advice would you give someone who is ­hesitant to try something new?

You don’t realize the power of your mind. If you at least start to improve how you think by using creative thinking techniques in books such as Thinkertoys by Michael Michalko, you’ll embark on a very powerful journey, taking your life into unforeseen places. Get over not wanting to leave your comfort zone and do something you never thought you’d do. You’ll grow confidence, enabling you to try more new things. You’ll gradually see your life change and improve…. Your secret weapon is your brain. It can be your biggest asset or your biggest obstacle.

I have many things planned. Next year I’ll travel all over Europe and sing and play guitar in my rock band! Also, I plan on speaking in every country I visit, essentially about my backstory before Color Switch and how I got to where I am today. I will also share valuable tools that anyone can use to change their own life and realize their own goals.


I’m constantly updating Color Switch and also working on many more games. In a few years I plan to open my own movie studio and develop films. I’m always looking for new creative outlets.

Greg Gazin, DTM is a Past District Governor and veteran podcaster, co-hosting The Toastmasters Podcast and producing the award-winning ToastCaster. He is also a writer, author, speaker, and 19-year member of New Entrepreneurs and Go Pro Speakers, both in Edmonton, Alberta, Canada.